Albertans will receive 13-cents-per-litre worth of relief at the pumps starting on April 1.

WTI is currently hovering around $118 per barrel.

“Here we are, after two years of often having lived apart, isolated as a result of the pandemic restrictions, just when life is starting to get back to normal, and now all of a sudden people are worried about how they are going to pay to fill up their gas tank and buy their groceries,” said Kenney, who estimates the savings to Albertans on the fuel tax to be worth approximately $1.3 billion.

Kenney also announced a rebate of $150 that will be applied directly to electricity bills, though there is no real timeline attached to the rebate, just that it will be applied once the government passes the required legislation. The program is expected to cost the province about $280 million.

The rebate program will consist of three $50 monthly rebates to cover high costs during January, February and March. It will be applied right to electricity bills.

“If you pay an electricity bill, you will see this rebate on it,” said Dale Nally, Associate Minister of Natural Gas and Electricity.

Last week, Kenney said he would consider such programs if the federal government delayed the implementation of the carbon tax increase. Prime Minister Justin Trudeau has not committed to any change to the carbon tax program and the increase this year is expected to cost Albertans an additional 2.2 cents per litre.

Kenney said this will leave the net difference of about 10 cents per litre. The removal of the gas tax will be re-examined on a quarterly basis.

There is no guarantee that gas will be cheaper, as there is nothing requiring gas stations from leaving prices where they are and collecting the 13 cents per litre themselves. Kenney said they will do what they can to pressure them to ensure the savings are there and noted market pressures should help in the process as well. 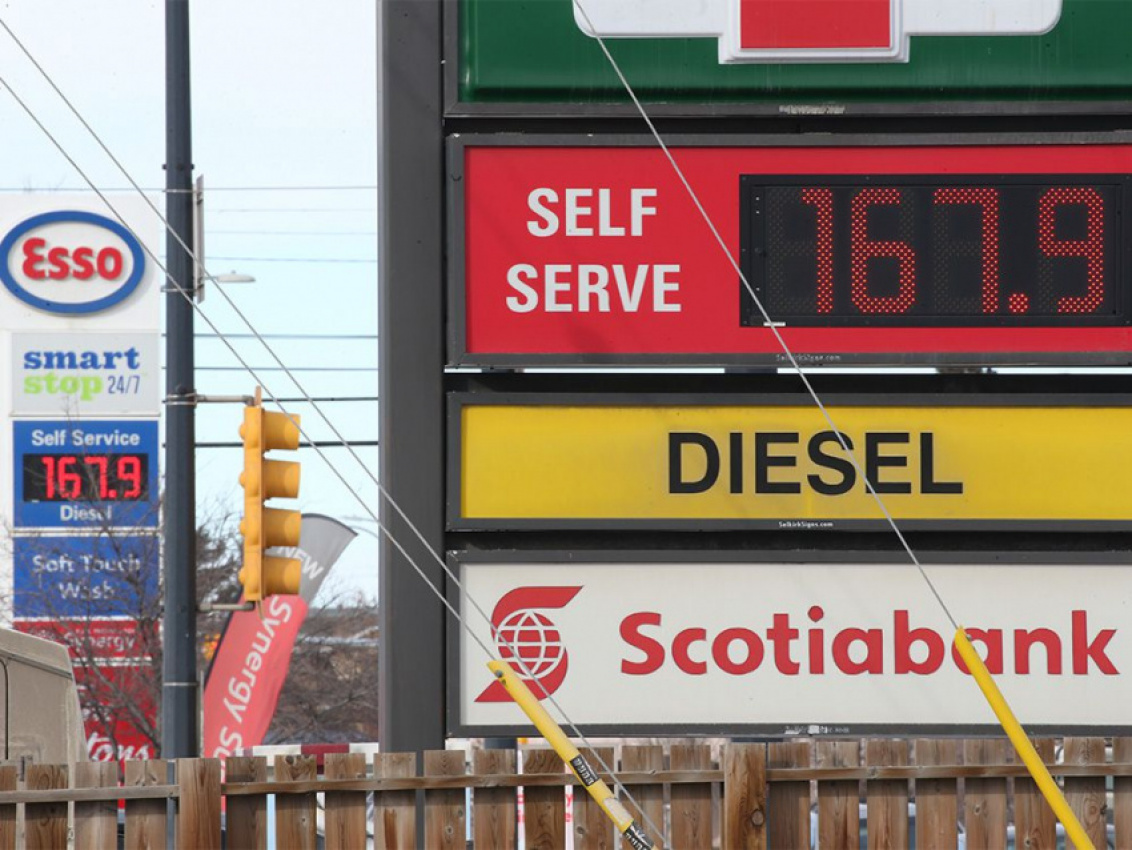 Gas prices at about $1.68 / litre are seen advertised on 16th Avenue N.E. in Calgary on Monday, March 7, 2022. Alberta has announced they are dropping the provincial sales tax on fuel to help consumers with surging prices. PHOTO BY GAVIN YOUNG/POSTMEDIA

Alberta currently has the lowest gas prices in the country, according to GasBuddy.com, with an average for regular gas at $1.58.9 per litre. B.C. has the highest prices in the country with the average being $1.94 and some stations selling gas at more than $2 per litre. The national average is $1.79.6. In Calgary, the average cost per litre is $1.59.9, up 12.6 cents per litre over the past week. It is the highest ever recorded in the city.

Trevor Tombe, an economics professor at the University of Calgary, said delaying the carbon tax would have very little impact on the cost of gas and that the biggest driver is the global price of oil.

The price of gas will impact the cost of living dramatically, he said. He estimated for every increase in global oil prices of $10 per barrel, it raises the overall inflation rate by about 0.4 percentage points.

“We could easily see gasoline alone contributing a full percentage point or two to inflation, just for March,” said Tombe. “That would be like the entire year’s inflation target crammed into an entire month, just for March.”

Opposed to focusing on interfering with markets, the best thing the government can do to offset the spike in cost of living is to put cash in the hands of Albertans, he said, noting the province did that with the electricity rebate. 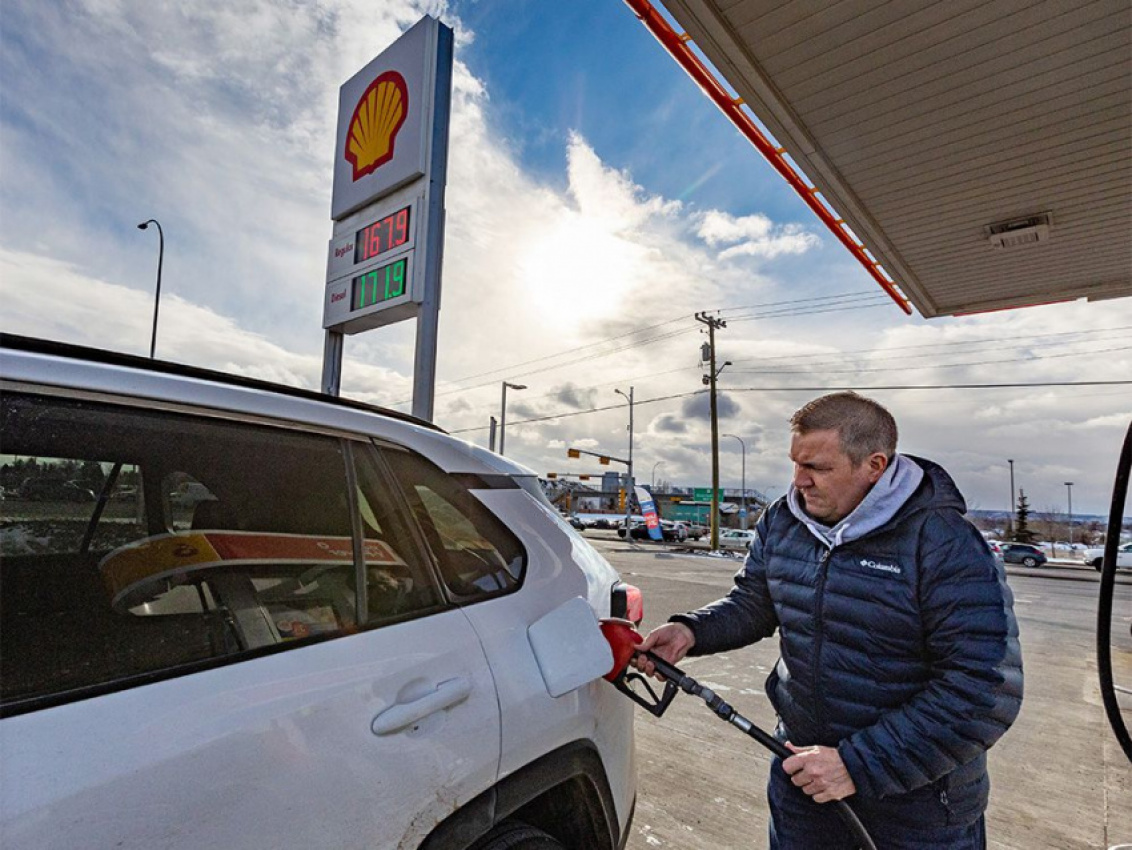 Cliff Cullen fills up at $1.67.9 at a Shell station on 16th Avenue N.E. in Calgary on Monday, March 7, 2022. Alberta has announced they are dropping the provincial sales tax on fuel to help consumers with surging prices. PHOTO BY GAVIN YOUNG/POSTMEDIA

NDP Energy Critic Kathleen Ganley called the two programs “woefully inadequate” to address the financial impacts on Albertans as they grapple with rising energy costs. She also reiterated capping natural gas at $6.50 per gigajoule, as announced in the budget, will impact very few.

“We’re pleased to see action on fuel prices; I think that is a step in the right direction,” she said. “But overall, I think we’re not satisfied with what’s been brought in and I think that Albertans deserve and need more.”

Energy prices continue to skyrocket with the Russian invasion of Ukraine, and will only continue to go up when coupled with other supply chain issues.

This is also accounting for much of the upward pressure on the international natural gas markets as Europe struggles to cut ties with Russia.

Kenney said this should be an impetus for the U.S. and other countries to turn to Canada for oil and gas as opposed to looking towards other nations, such as the dictatorship of Venezuela or Saudi Arabia and Iran. He will attempt to leverage this into a renewed commitment to revive the Keystone XL pipeline.

Tombe said while this is policy that should be given more thought, Alberta is not in position to flip a switch and supplant the Russian oil supply.

“It’s not to say we shouldn’t pursue aggressive sanctions in this case, but we shouldn’t dilute ourselves into thinking it will offset the increase in energy prices we are seeing,” he said.

— With files from Lisa Johnson

Keyword: Alberta to temporarily drop 13-cent-a-litre gas tax to provide some relief at the pumps