Acura is charging a pretty penny for the exclusive, hand-built PMC Edition version of the 2023 TLX Type S sports sedan. Orders opened for this limited-production trim level last month, and now we know that it starts at $63,995—a $7550 premium over the starting price for the mechanically identical TLX Type S.

What does the extra outlay get you? Primarily it’s the knowledge that your TLX is one of just 300 PMC Editions in total—or just one of 100 that’s finished in each of the three colors taken from the NSX. Orders already opened for Curva Red and 130R White—and Acura says the white car is sold out—but the Long Beach Blue Pearl hue pictured here won’t be open for reservations until December 8. Additionally, the PMC Edition comes with other visual tweaks including 20-inch wheels painted a copper hue, a front diffuser and rear spoiler, and some interior trim differences including a serialized plaque and carbon-fiber trim. 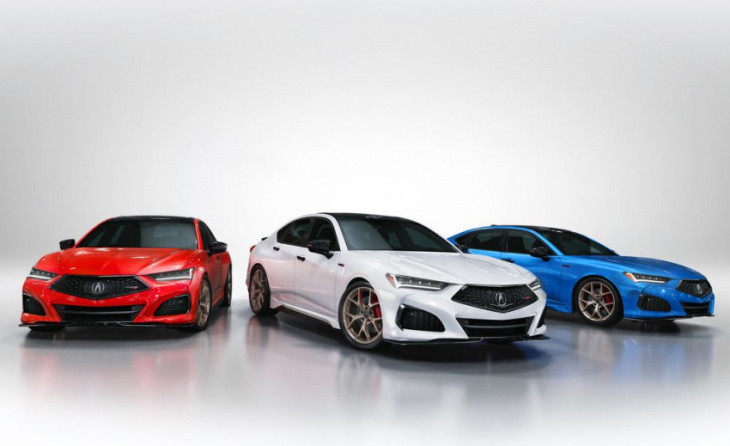 The TLX PMC Edition is built at the same Performance Manufacturing Facility in Ohio that just finished production of the NSX Type S supercar, rather than the Marysville, Ohio plant where other TLXs are built. But its components are the same as what you’ll find in the standard TLX Type S. That means a turbocharged 3.0-liter V-6 engine with 355 horsepower, an eight-speed automatic transmission, and Acura’s SH-AWD system with torque vectoring.

More on the TLX

Acura hasn’t shared exactly when deliveries of the 2023 TLX PMC Edition will begin but does say that the costlier destination fee for this model—it’s $1995 compared with the standard model’s $1095—does include a different shipping process. PMC cars get a special cover to protect the paint and are delivered to dealerships in an enclosed single-car carrier.

Is the Acura ILX a Luxury Car?

How Fast Is the Acura MDX Type S?

4 Used Acura NSX Alternatives That Are Cheaper Than $100,000

Acura Wants You to Tune the Integra

I start giggling as I accelerate onto the oval test track at Honda’s Tochigi research and development center in Japan, and I don’t stop until I take the exit two laps later. The cause of such automotive glee: a prototype drive of the 2024 Acura Integra Type S. The ...

This video clip highlighting the Acura Integra 1.5L Turbo 4-Cyl. was played during the recent ceremony celebrating the 2022 winners.

Are you going to miss it? Fans of the Acura NSX are lamenting the fact the final NSX Type S rolled off the production line in Marysville, Ohio recently, closing out another era for the performance car nameplate. It was just the 350th example of the second-generation supercar, driving home ...


View more: This Is the Most Reliable Acura SUV


View more: Can You Get Past the Infotainment Controls of the 2023 Acura TLX?


View more: 3 Reasons to Choose the 2023 Cadillac CT4 Over the New Acura Integra

Will the New 2023 Acura Integra Offer a Coupe?

Is the Acura RDX the Most Reliable Luxury SUV in Its Class?

Acura has officially ended production of the NSX

How Much Does a Fully Loaded 2022 Acura NSX Cost?

The 2024 Acura Electric SUV ZDX Is Coming: Why It’s Worth Waiting For

Do These 6 Cool Features Make You Want to Drive the 2023 Acura MDX Luxury SUV?

5 of the Fastest Acura Models Ever Produced