German tuning firm AC Schnitzer has turned its hand to the BMW i4, offering a range of modifications for the EV 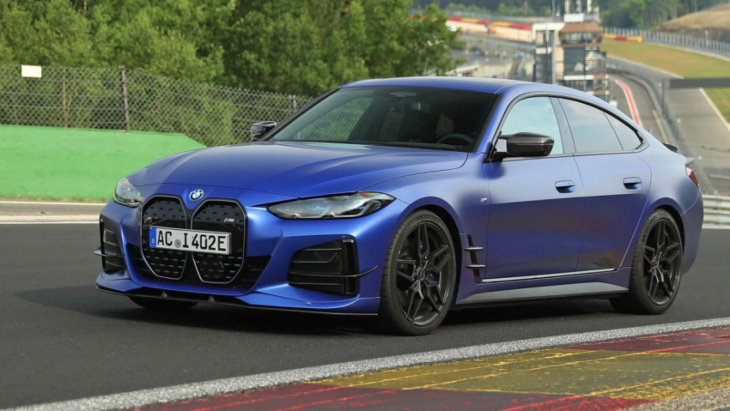 An M-developed quad-motor BMW i4 has been teased in an official video, but before the range-topper surfaces, AC Schnitzer has developed its own suite of modifications for the svelte EV. These modifications range from aesthetic upgrades like new interior trim pieces to tweaks to the suspension and exterior design.

This is AC Schnitzer’s first go at upgrading an electric vehicle and the unique attributes that come with it, but thanks to a close proximity to the petrol powered 4-series Gran Coupe, the new elements for the BMW i4 are near-identical to those also available on its combustion-powered counterparts. This doesn’t include any performance upgrades, though, with the job of modifying the complex control units used to distribute power between the i4’s electric motors still in the process of being developed.

Instead, AC Schnitzer has focused on chassis upgrades, developing a bespoke spring kit for the i4, reducing ride height by up to 25mm front and rear for both an improvement in stance and lateral stability. There’s also a new set of 10mm aluminium wheel spacers, providing a 20mm overall increase in track width that can be fitted with existing wheels, or a range of AC Schnitzer’s own 19- or 20-inch flow-formed AC4 and AC1 wheels available in a number of finishes.

There’s also a number of new aerodynamic components available including a new front splitter, front-mounted canards and a carbonfibre rear roof spoiler. Though the primary purpose of these parts is aesthetic, Schnitzer does claim they increase downforce too. 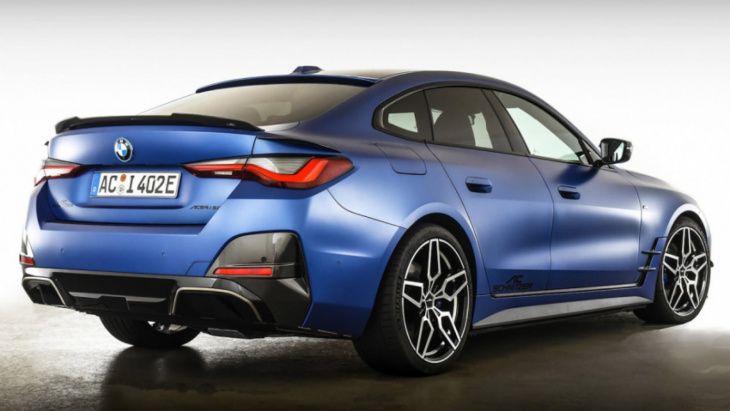 Inside, AC Schnitzer can also provide a number of new aluminium trim pieces, including a new footrest and pedals, a cover for the iDrive controller, and a new keyholder.

These new parts are available individually, rather than in a single package, giving buyers the ability to tailor upgrades to their own taste. Though significant EV performance upgrades are still being worked on, the combination of these aero tweaks, suspension modifications and some sticky tyres are still bound to shave a few precious seconds from a Nürburgring lap time.

• This 2011 BMW 328i Sports Wagon is one of fewer than 400 3-series wagons fitted with the M-Sport package. • The wagon’s naturally aspirated 3.0-liter straight-six makes less power than BMW’s turbocharged engines, but it is less complex and thus more reliable. • The result is a car ...


View more: 2011 BMW 328i xDrive Sports Wagon Is Our Bring a Trailer Auction Pick of the Day

The first press car simply had a low coolant level, which compromised the fast charging performance.

BMW has announced its drivers for the 2023 IMSA season and revealed the M Hybrid V8’s livery, and if you’d guessed the car would be running with the classic BMW red, purple and blue colours you were spot on. We have to say, this looks like quite the machine. First ...

The BMW M3 Touring is the first wagon version of the iconic M3 high-performance sedan to be made. BMW has revealed pricing and specs for the 2023 BMW M3 Touring ahead of its arrival early next year. Available only in the Competition specification and wearing a list price of ...

BMW in June provided a first look at its new M Hybrid V8 LMDh race car, and on Thursday the automaker revealed the livery the car will sport for its inaugural season. The livery was revealed late on Thursday at the car’s U.S. debut at the Petersen Museum in ...

BMW Australia is getting ready to welcome the very exciting, and first ever, M3 Touring early next year, and has today confirmed some initial details including the starting price. The M3 Touring will be offered in high-spec Competition form only, featuring an M xDrive switchable rear-/all-wheel drive system and the ...

What’s inside BMW Museum Munich TopAuto recently had the chance to visit BMW’s automotive museum outside its headquarters in Munich, Germany, while attending a conference on the company’s ongoing projects. The museum is situated between the automaker’s head office and its famous Welt exhibition centre, which doubles as a ...

BMW nostalgia and automobilia at the Revival

BMW to use new ’round’ battery cells, increase range by 30%

New tyres for my BMW 330i Sport: Switched from Bridgestone to Michelin

Everything you need to know about the BMW iX3