There are a lot of factors to consider talking in drag races, most especially driver's skills. 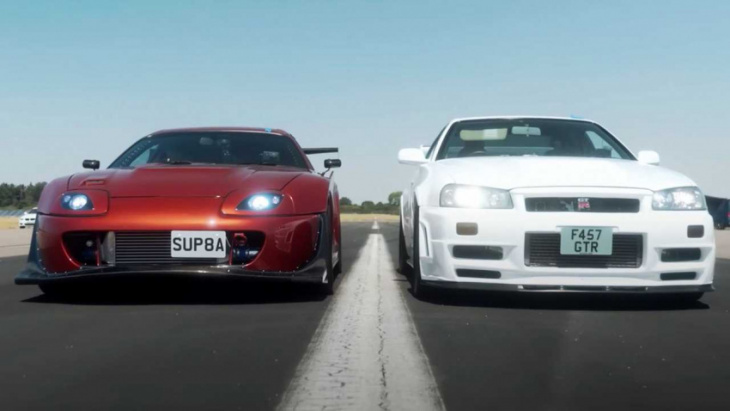 Oftentimes when talking about drag races, power and weight are taken into prime consideration. If a more powerful and lighter car faces a heavier, tad less powerful contender, it’s almost always that the former would win.

That isn’t always the case, of course. Take this matchup, for example, courtesy of YouTube’s Officially Gassed. What we’re seeing is a drag race slugfest between tuned ’90s legends: an A80 Toyota Supra and a Nissan Skyline GT-R R34.

But just like most of these cars that still exist today, they were tuned and modified by their owners. The A80 Toyota Supra here came with several modifications in and out of the hood, including carbon fiber parts. With a single turbo helping its rebuilt 2JZ engine, the Supra made 850 horsepower (634 kilowatts) and weighed in at 3,086 pounds (1,400 kilograms).

But that wasn’t the end of the story. As you know, the Skyline GT-R sends power to all four wheels, while the Supra is a rear-wheel-drive coupe. The Nissan also wore Toyo R888R semi-slick street tires compared to the Pirelli P-Zero street rubbers that the Toyota was wearing. Both cars also came with manual gearboxes.

There were two types of drag races shown on the video: the first was from a roll while the other was from a standing start. The A80 Supra won the first round after a decider that ended in a photo finish. However, with the AWD traction advantage and the impeccable skill of the Skyline GT-R’s driver, the Nissan totally destroyed the Toyota when starting from a dig – and that was despite the Supra’s huge power and weight advantages.