A Moto Battle For The Ages 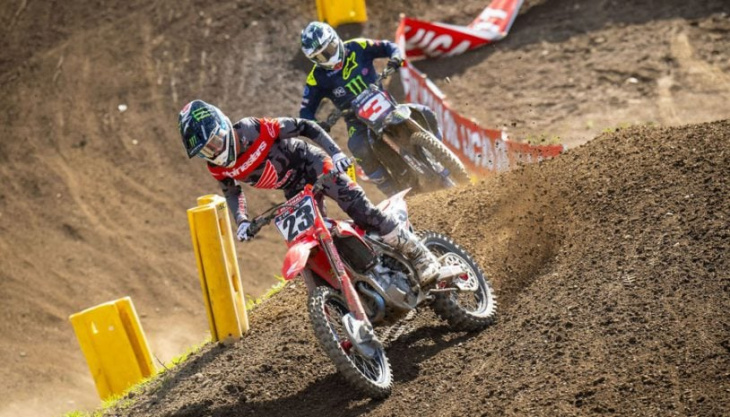 As it is in all racing, there can only be one champion in Lucas Oil Pro Motocross.

Even so, that didn’t stop Star Racing Yamaha’s Eli Tomac and Honda HRC’s Chase Sexton from going wheel to wheel all summer for the prestigious 450 class title. In what became an all-out duel that enraptured fans and kept race teams on their toes week-in and week-out, it all came down to a single point as the two riders made their way to Fox Raceway in Pala, Calif., for the season finale.

“It was very cool to be in that position, because a lot of times, you’re not. The championship’s either been run away with by somebody and then sometimes you’re never even close,” said Lars Lindstrom, Honda HRC’s team manager. “It’s taken a lot of years to get that close.”

The last premier class title that Honda HRC secured came in 2004 with Ricky Carmichael when the Pro Motocross series was still split into 250cc and 125cc divisions. The team came tantalizingly close in 2019 when Ken Roczen finished runner-up to Tomac, but the championship drought persisted.

As Sexton took on his second full year in the 450 class, the opportunity for Honda to end its disappointing streak appeared to be within reach. The 22-year-old encountered a few bumps in the road during the Monster Energy Supercross season, but by the time motocross rolled around, Sexton was a consistent, top-five rider.

The days of recurrent tip-overs and costly mistakes seemed to be behind him.

“I think confidence is the biggest thing for him,” Lindstrom said. “Then outdoors, he just went to another level.”

The Honda HRC crew introduced a few changes that increased Sexton’s comfort level on the bike, but ultimately, it was the momentum he brought from Supercross that made the difference in his mental strategy. The pieces finally felt like they were falling into place for Honda HRC, and when Sexton and Roczen went 1-2 on the podium at the opening round of Pro Motocross in June, it was game on. 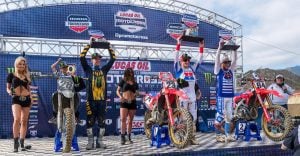 Meanwhile, Star Racing Yamaha’s team manager Jeremy Coker was watching his plan come together on the other side of the pits.

Star Racing Yamaha signed Tomac in late 2021, stunning the industry with the news that Tomac was leaving Monster Energy Kawasaki after six years. Some skeptics called it a gamble, but Coker had no doubt Tomac could return to his former glory.

“You read a lot of things, you hear a lot of things that say, ‘Eli Tomac’s on his way out, he’s done,’” Coker said. “That’s something that us at Star Racing kind of looked at each other and said, ‘He’s not done, he’s still got a lot left in the tank.’”

Tomac joined the pro ranks in 2010, becoming the first rider in the history of the sport to win his professional debut — the Hangtown Motocross Classic. Since then, Tomac has earned a Supercross championship, four Pro Motocross titles and a record number of wins in each series.

If he would’ve decided to call it quits after 2021, his résumé still would’ve guaranteed him a spot among the sport’s all-time greats.

Despite being a relatively new team in the 450 class, the Star Racing Yamaha squad had already found success with Dylan Ferrandis — the Frenchman won the motocross championship in 2021. So for Coker, there was no reason to expect anything less from Tomac.

“Of course, we came into the season expecting to win. You’re not in this to get second. But did I expect it to come the way it came? No,” Coker said. 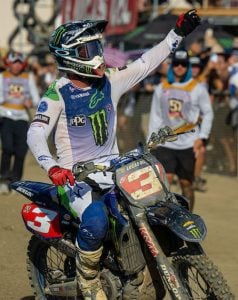 It didn’t take long for Tomac to find his stride with Yamaha, and by the fourth round of Supercross, he was at the top of the podium. Three months later, Tomac wrapped up his second series championship, giving Yamaha its first Supercross title since 2009.

But perhaps more importantly, Tomac was enjoying the ride — a feeling he had been recently been missing in his career.

That’s why, when Star Racing Yamaha originally approached Tomac about signing with the team, Coker’s emphasis was on bringing Tomac back to the reason he got into racing in the first place — to have fun.

And as the 29-year-old rider geared up for his 12th season of motocross, it was evident his transition to Star Racing Yamaha had rejuvenated his love for the sport.

“I just think of this whole season in its entirety. It’s been the most enjoyable season of my career, by far, starting with Supercross and now motocross,” Tomac said.

There was only one problem and that was Sexton and his No. 23 Honda HRC steed.

From the moment the gate dropped on the 50th anniversary season of Pro Motocross, the two quickly emerged as championship rivals, though Sexton was first to take the points lead.

However, as the rounds clicked off and the season reached its mid-point, Sexton and Tomac threw it into another gear as they relentlessly challenged one another on the track.

“I would compare it to Ricky Carmichael and James Stewart,” Lindstrom said, equating Tomac to Carmichael and Sexton to Stewart in this case. “Ricky was on his way out of his career, but still super dominant. James was up and coming, super-fast and not always super consistent.”

In 2006, Carmichael had five motocross championships under his belt and was practically established as the best in the business. But when Stewart entered the scene as a force to be reckoned with, Carmichael was forced to push the limits to keep the rookie at bay. In what became known as the golden era of motocross, Carmichael and Stewart went bar to bar nearly every round, building insurmountable gaps on the rest of the field and elevating the sport to a new level.

Fast-forward to this year, and it was happening again.

“It takes you back a little bit to those days, but I think it’s on another level. I believe if you had those other guys (Carmichael and Stewart) racing this season, I think it would still be Chase and Eli on their own,” Coker said. “I think they’re in another league than any racer has ever been.”

The even match between the No. 3 bike of Tomac and No. 23 machine of Sexton made it even greater, making it difficult to predict who had the edge on any given weekend. As Coker said, it could simply be attributed to who woke up on the better side of the bed that morning.

But as it is in life, all things come to an end. 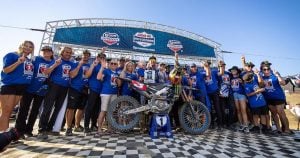 And as the crowd flowed into Fox Raceway for the motocross finale in early September, they prepared to witness an unforgettable end to the incredible rivalry. Over in the pits, Honda HRC and Star Racing Yamaha were busy acting like it was just another race, although it was nearly impossible to ignore what was on the line.

Lindstrom worked out qualifying and gate pick strategies with Sexton, while Coker and Tomac agreed to attack the finale the same way they treated the first race of the season — line up, twist the throttle and try to go 1-1.

Tomac and Sexton took to their respective gates after qualifying first and third, with the title fight potentially minutes away from a conclusion.

“The real nerve-wracking moment was the start of the first race, and seeing Eli right there,” Lindstrom recalled. “Chase got the holeshot, but then, there’s Eli.”

Although Sexton was only one point behind Tomac, the Honda HRC rider needed to win the first moto to solidify his championship hopes. And while Sexton had a tight grip on the lead for a majority of the race, Tomac bided his time to make the pass and eventually crossed the finish line first.

The second moto was a different story entirely, although the end result was the same: Tomac first, Sexton second. The battle had reached its peak, and Tomac emerged the victor. Star Racing Yamaha now held its second consecutive 450 Pro Motocross title, while Tomac became a five-time overall series champion — a record that is second only to Carmichael, who has seven.

“Pala, the last lap, that’s a feeling that’s hard to ever get rid of,” Coker said. “It was an exceptional year, to win both championships. It’s something that riders and team personnel can only dream about.”

In a year where many thought Tomac’s time in the sport was over and where others viewed Sexton as nothing but a rookie, both  proved they belong exactly where they ended up.

Keyword: A Moto Battle For The Ages