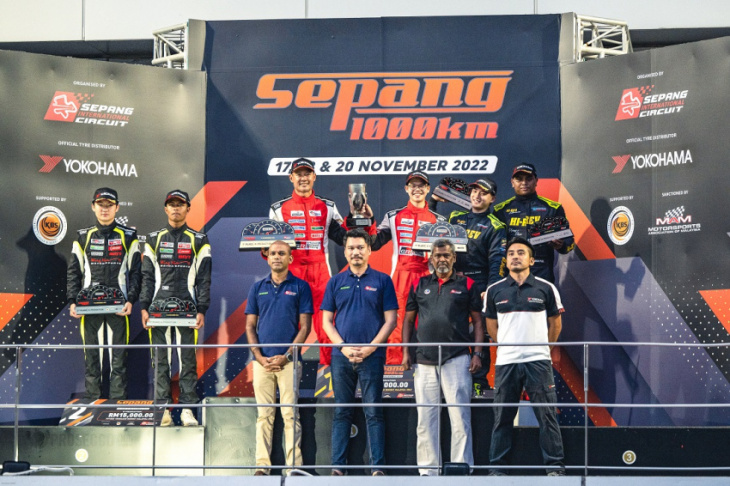 Toyota bagged a historic 1-2 finish on its return to the prestigious Sepang 1000KM endurance race. Moreover, in the gruelling 9-hour race at Sepang International Circuit, 3 Toyotas managed to finish in the top 5 overall positions and in the Malaysian Touring Car (MTC) Class. This is only Toyota’s 2nd year participating in the race so it seems like the effort and experience in the Vios Challenge series had paid off for the drivers and teams. 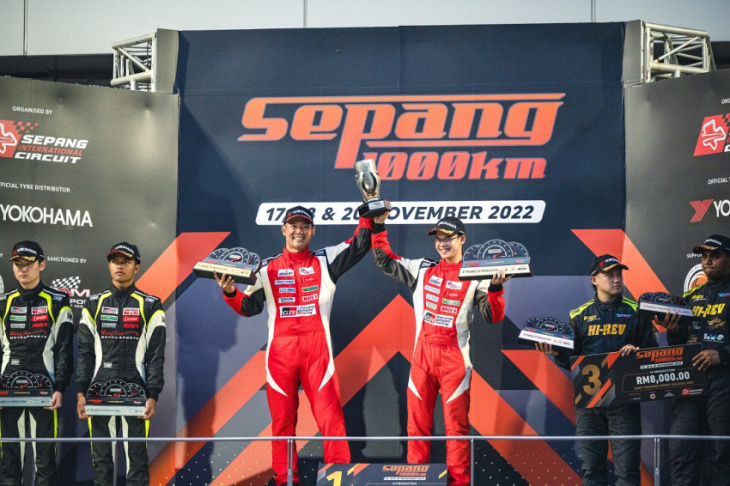 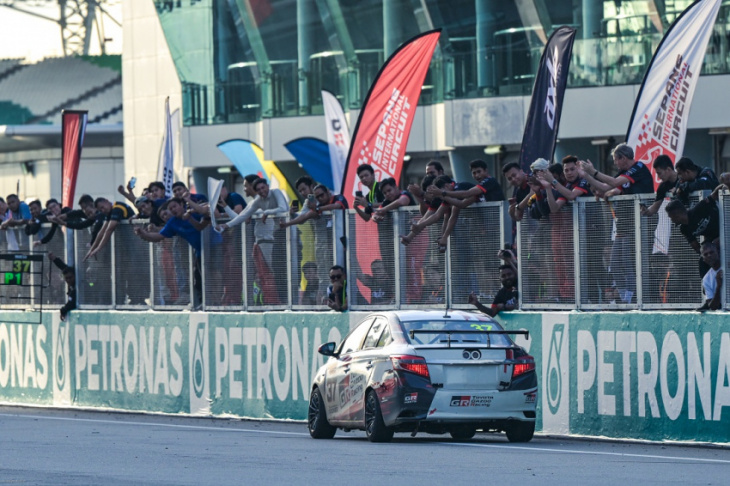 “2021’s was all about learning and gaining track time to develop both the Vios and Yaris to take on the prestigious 1000KM challenge. We had an extensive program in place as well as competitive cars, and we went on to win the race but we had to accept a penalty which classified us 3rd in the MTC Class. Going on to win the race this year and doing it in the manner where we not only led from start to finish but had 3 cars in the top 5 positions overall more than makes up for that setback,” said UMW Toyota Motor President Ravindran K.

“From its standard production model form competing in 5 seasons of the Vios Challenge race series to its debut in the Vios Sprint Cup which is a 1-hour race and now winning a 9-hour endurance race, the Vios has against all odds firmly established itself as a competitive model on the track.”

More importantly, Ravindran said Toyota’s involvement in Malaysian motorsports has contributed to helping uncover and groom many new young driving talents. “It’s about giving back to the community and in our case it means providing potential young Malaysian talent with the right platform and the opportunities to grow as competitive drivers. This has been consistent throughout GAZOO Racing Malaysia’s program over the past 5 years which began with affordable participation in the Vios Challenge, the introduction of a Young Talent Development Program, and establishing a Rookie Class of racing in the Vios Challenge to promoting young drivers up the motorsports ladder to drive in more competitive machines and classes. I also want to thank our partners and sponsors for playing an instrumental part in the company’s racing achievements.” 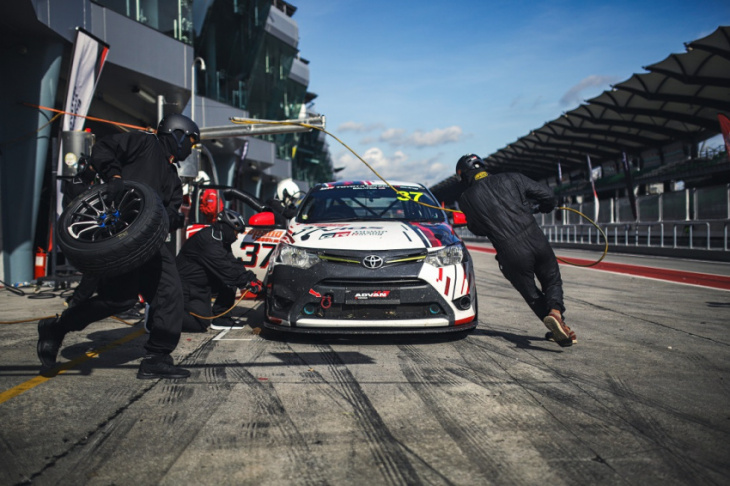 Toyota had all 3 cars consistently running the race in the top 5, showing its prowess on track. The #37 Toyota Vios of Naquib started from pole and led in the first lap before pacing in 3rd position after the first hour of racing. A slightly dislodged rear bumper due to contact had brought the car into the pit earlier than planned and cost him several minutes. In the 2nd hour, teammate Tengku Djan took over driving duties and managed to claw back a position up to 2nd place.

From the 2nd hour of racing, the pair of Hayden Haikal and Jwan Hii in the #39 Yaris dominated and led the race while teammates Boy Wong and Dannies Ng in the #38 Yaris rounded out the top 3 spots. All 4 drivers are regular contenders in the Vios Challenge series. 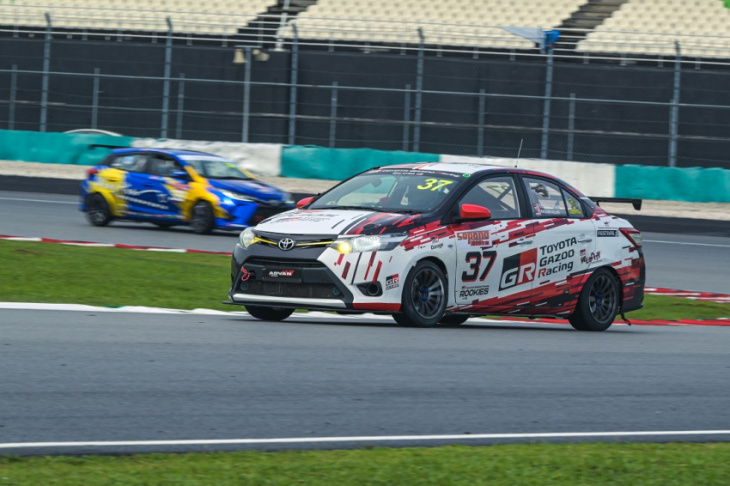 After 6 hours of running and with 58 laps to go, the pair of Tengku Djan and Naquib swept into the lead with a one lap advantage over Hayden and Hii. The #38 Yaris of Wong and Ng trailed 58 seconds in 4th, behind the Hi-Rev Dream Chaser’s Mitchell Cheah. The #38 had been running as high as 3rd where it stayed for more than an hour. But with 13 laps to go, Hi-Rev Dream Chaser’s Cheah reclaimed that position.

“I’ve done so many endurance races on simulator but this was the first time I’ve started an endurance race in real life. I’m happy to say there weren’t too many butterflies and I managed to calm my nerves. It was unfortunate that someone clipped my rear bumper in the first corner and we lost some time after being flagged in to come in for repairs. All in all, it was a great race. We wanted to make sure we had a clean race and that everything went according to plan,” said Naquib.

Naquib was one of the GAZOO Racing Malaysia’s pioneer rookie racers in the Vios Challenge who transitioned from simulator racing to real-life saloon car racing. In 2021, he was crowned the overall Rookie Class champion and went on to win this year’s overall Sporting Class championship. He will return for Season 6 next year to compete in the Super Sporting Class for elite and professional drivers. 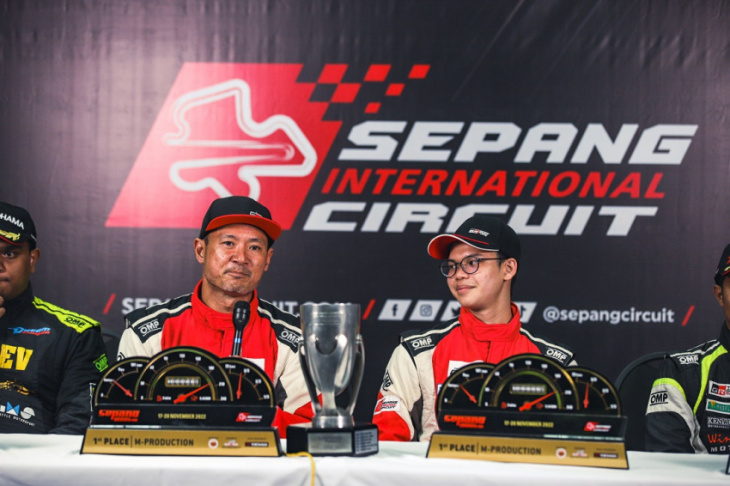 For another young driver, Hayden, who was chasing his first elusive S1K victory, finishing second was still an outstanding result after collecting 2 3rd place finishes over the last 2 years. “I misjudged the start and fell back to 4th position before catching up with the leaders and trying to maintain a good pace,” said Hayden. “It’s the same car we drove in last year’s S1K but we’ve had a whole year of familiarising ourselves with the car this time having competed in the Malaysia Championship Series. I wanted to win, I expected nothing less than a top 3 finish but I’ll take 2nd place after a very close race from start to finish.”

A total of 77 cars lined up on the grid for the start of 14th edition of the Sepang 1000KM endurance race which was run over 180 laps or 9 hours. The race featured the MTC and SP2 Classes for cars below 1,600cc and the GAZOO Racing Vios Enduro Cup which was a race exclusively for the Toyota Vios cars competing in the Vios Challenge race series.

“It was a great race and my second time racing alongside my son in the S1K. To be honest the Vios Challenge has provided Abdul Miqail with a very strong foundation to develop his driving skills ,” said Al Farouk. Victory earned Al Farouk and Abdul Miqail RM10,000 in prize money, while the 2nd and 3rd place bagged RM8,000 and RM6,000 respectively. The GAZOO Racing Vios Enduro Cup offered a total of RM30,000 in prize monies with the 4th and 5th places also taking home RM4,000 and RM2,000 respectively. A total of 14 cars raced in this exclusive class.