It may be a concept for now, but it would make a great electric performance crossover.

Lexus has provided more details about the Lexus RZ Sport Concept, detailing a 402-horsepower powertrain that we're hopeful will make production. This isn't the first time we've seen the striking design study previewed earlier this year ahead of the Tokyo Auto Salon 2023, but it is the first time we've been given technical details.

Thanks to a pair of 150 kW motors mounted on the front and rear axles, respectively, the Sport Concept produces a combined output of 402 hp.

The standard RZ 450e also employs a 150 kW motor on the front axle but has to make do with a lesser 80 kW example at the rear, generating a combined 308 hp. But with rivals like the Tesla Model Y Performance and Ford Mustang Mach-E GT, Lexus would be wise to enter the high-performance electric crossover sphere. 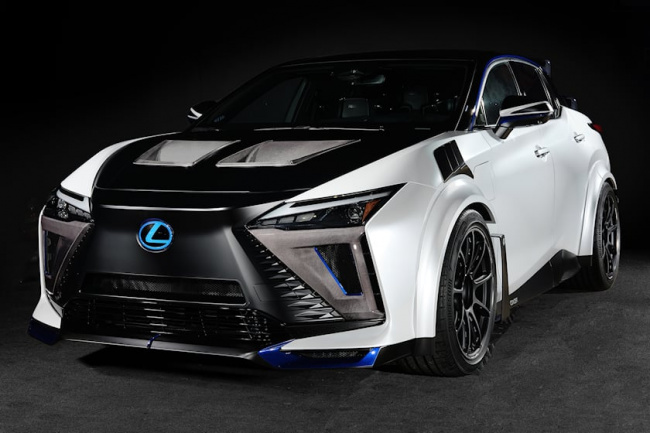 The Sport concept and its 402-hp setup have shown us it's possible for Lexus to create such a thing. There's a strong possibility we could be looking at the first signs of an electrified Lexus F crossover, but that may still be some way off. After all, Lexus representatives have said Lexus F models will probably adopt hybrid technology before going fully electric.

Then again, the incredible LFA's successor – officially known as the Electrified Sport concept – will debut as a battery-powered supercar with a manual transmission of sorts, possibly called the LFR.

Another possibility is that the more powerful RZ could debut as an RZ 500e. This would bolster the range and give buyers a choice of a high-powered model, the existing RZ 450e, and the forthcoming RZ 300e. 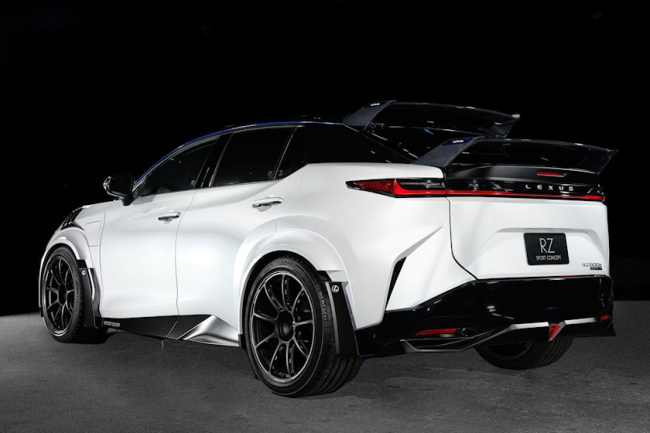 The RZ Sport concept, pictured above, also features lowered suspension and wider tires that should improve handling. While those improvements will go a long way in creating a sportier derivative, we're guessing Lexus would tone down the styling considerably. It looks great, but Lexus vehicles tend to be bought by conservative types who gravitate towards demure, understated design.

Hopefully, some of the details – like the four bucket seats – remain, but should Lexus see fit to create a high-performance RZ, we're guessing the body kit will be toned down somewhat.

Lexus is rumored to have culled development of the rumored LS F super sedan and LF SUV. Both were expected to debut with a powerful V8, but it's possible both were killed off in favor of pursuing electric performance. 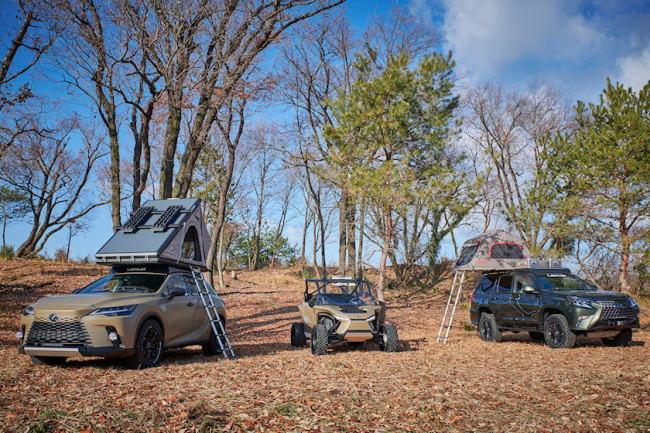 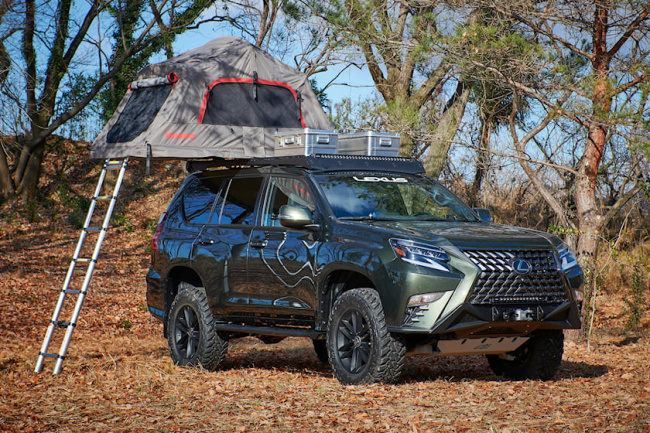 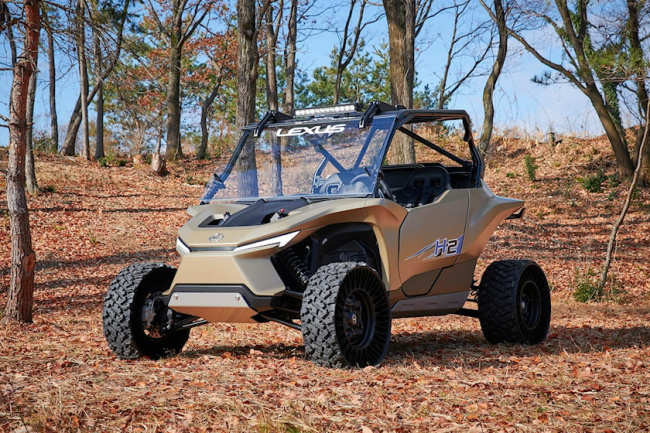 The hotted-up RZ isn't the only Lexus to have received special attention for the Tokyo Auto Salon. The RX Outdoor Concept is based on the RX 450h+ and has been designed as a plug-in hybrid vehicle for adventurers. The rugged crossover features a rooftop tent, among other things, that will contribute to a luxurious camping experience.

Thanks to BF Goodrich KO2 all-terrain rubber and an aluminum skid plate, the RX Outdoor Concept is able to traverse obstacles that would leave a regular RX in a tight spot. Those that take off-roading seriously will be drawn to the GX Outdoor Concept, based on the already capable GX 460.

Fitted with Toyo Open Country mud-terrain tires and an electrical winch, the concept GX is a dream for avid off-road enthusiasts. A roof-mounted tent and a neatly integrated equipment storage unit in the cargo area round everything off nicely. 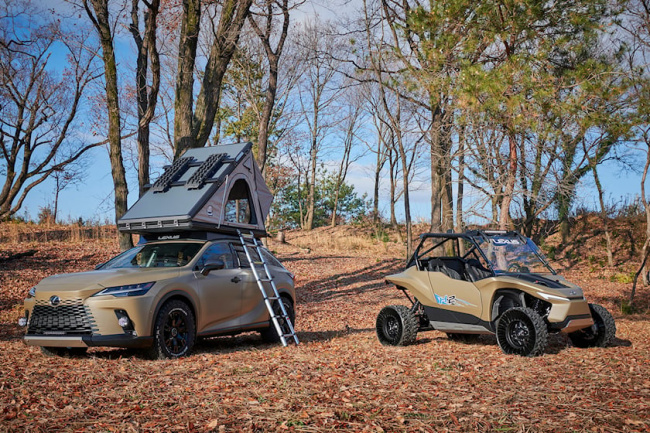 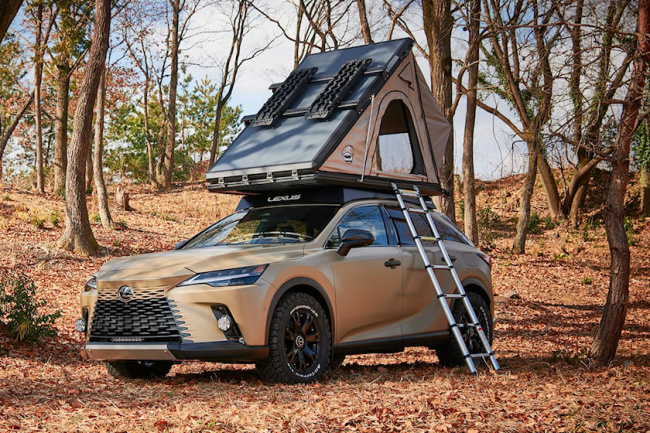 Akio Toyoda, grandson of the car maker’s founder, and one of the most colourful automotive bosses in Japan’s recent history is stepping aside as CEO of Toyota. He will be replaced as president and CEO on April 1, 2023 by Koji Sato, who is currently the head of both Lexus ...


View more: Akio Toyoda steps down as Toyota CEO, to be replaced by Lexus boss

Akio Toyoda shifting to chairman’s role after a decade at the helm as carmaker eyes transition into a “mobility company”.


View more: 2023 Lexus LS: Everything You Need to Know About This Luxury Sedan


View more: The 2023 Lexus IS Is No Match for These 2 Luxury Cars, Says Consumer Reports


View more: What Are the 6 Most Reliable Car Models According to Consumer Reports?

Luxury car sales may scale a record high this year

Only 2 Lexus Models Are Among the Longest-Lasting Cars

The 2022 Lexus LX600 Ultra Luxury Comes With Some Sacrifices

Watch Lexus IS F With 273,000 Miles Push Hard Around The Nurburgring

A Used 2013 Lexus ES300h Could Be the Perfect Luxury Bargain

How Many Different SUVs Will Lexus Make in 2023?

Lexus India announce the winners of the Lexus Design Awards

What Does the RX Stand for in the Lexus RX? It’s Not “Prescription.”