As more consumers set their sights on electric vehicles, Chevrolet is working to make the market more accessible. It offers the two most affordable new EVs: the 2023 Chevy Bolt EV hatchback and 2023 Chevy Bolt EUV crossover. Both start under $30,000.

If you’re considering one of these models, you might assume you’d be getting more for your money with the Bolt EUV. It’s the larger of the two, with a wheelbase that’s 2.9 inches longer and a body that’s 6.3 inches longer. It also costs a bit more than the Bolt EV.

However, in some areas, the EUV doesn’t offer much of an improvement over the smaller Bolt. In fact, you might be surprised to learn how these two EVs stack up. Here are four of the ways the 2023 Chevy Bolt EV tops the EUV. 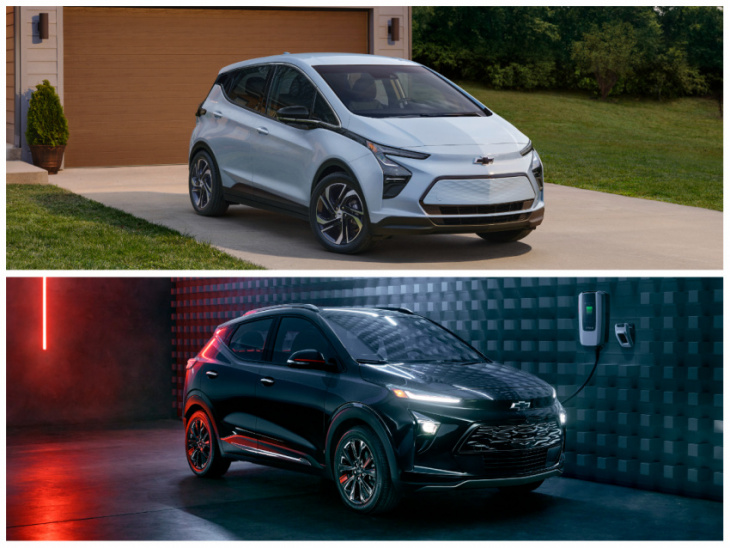 Surprisingly, the smaller model comes out ahead in this category. Although the 2023 Chevy Bolt EUV is just over six inches longer than the Bolt EV, that extra length doesn’t go toward the cargo area. According to MotorTrend, the EUV has 16.3 cubic feet of cargo space — 0.3 cubic feet less than what you’ll find in the Bolt EV.

Because the EUV is larger, it’s no surprise it’s slightly less efficient than the smaller Bolt. According to the Department of Energy, the Bolt EV boasts 120 MPGe, while the EUV gets 115 MPGe. The hatchback also has a slightly better driving range than the crossover: 259 miles on a full charge versus 247 miles.

$GM is cutting price for Chevy Bolt EV from $32k to $26k pic.twitter.com/rSkABZddFh

As for purchase price, you can’t go wrong with either of the 2023 Bolt models. Both are remarkably affordable. But the original Bolt edges out the EUV in this category as well. Its starting MSRP is $26,595, while the EUV will set you back at least $28,195. The $1,600 difference might be worth it to some buyers.

The 2023 Chevy Bolt EV wins in this comparison

When you compare the 2023 Chevy Bolt EV and EUV in the above categories, there’s a clear winner. Both have garnered considerable consumer interest as affordable EVs, and expert reviews of the two models are generally good.

The EUV has plenty to recommend it, and it stacks up well against other electric vehicles, such as the Toyota bZ4X. But compared to the Bolt EV, the crossover loses out against the hatchback in significant ways.

When it comes to the Chevy Bolt EV and EUV, this might be one of those rare situations where you come out ahead by spending less money.