The 2022 Kia Telluride is one of the best midsize SUVs on the market right now and has a lot of worthy competition. For example, Ford recently redesigned the Explorer. It’s now a capable and popular competitor in the midsize SUV segment. However, there are many differences between the two SUVs. Here’s a look at three advantages the 2022 Kia Telluride has over the Ford Explorer.

Where the 2022 Kia Telluride is similar to the Ford Explorer

Not all midsize SUVs have three rows of seats, but both the Telluride and the Explorer come standard with three rows of seats. On top of that, both automakers gave popular midsize SUVs front-wheel drive as standard, and all-wheel is also offered as an option on both. Lastly, both SUVs are going to be very safe. This is primarily thanks to the fact that both automakers gave their vehicles a long list of standard smart safety features.

The three advantages that the Kia SUV has over the Ford 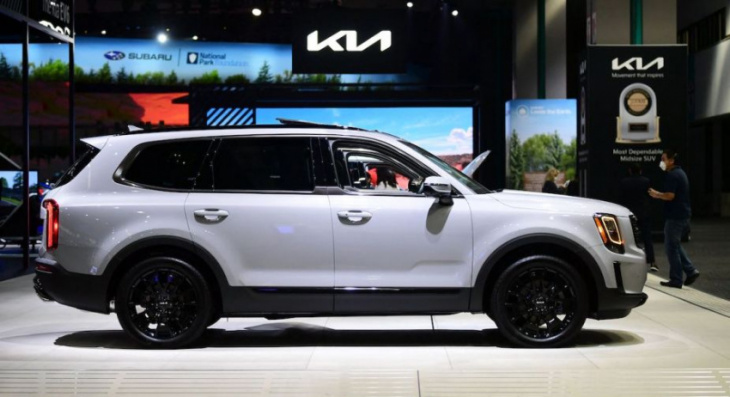 That said, while both SUVs have three rows of seats, the Kia has more seating capacity. The Explorer can seat a max of seven people, while the Telluride can seat a maximum of eight people. The seats aren’t cramped either, and as a result, there’s plenty of cargo capacity. With the seats folded down, the Kia SUV tops at about 87 cu-ft of cargo space.

And while both automakers gave their SUVs a lot of smart safety features, the Telluride is better equipped overall. Kia made Driver Talk a standard feature, and Driver Talk will allow parents to easily talk to their kids sitting in the back. The South Korean automaker also gave the Telluride a 10.25-inch touchscreen display, which is bigger than the 8-inch one that’s standard on the Explorer.

The last advantage the Telluride has over the Explorer is styling. As Kelley Blue Book wrote, the Telluride has a new grille and “handsome, solid proportions and tasteful details.” Kia also offers some stylish options, such as the Nightfall Edition, which can make the SUV look even cooler.

The specs of theses excellent SUVs

The South Korean automaker only gave the Telluride one engine option, and it’s a 3.8-liter V6 that gets 291 hp and 262 lb-ft of torque. This engine is paired with an eight-speed automatic transmission, allowing the Kia SUV to get 20 mpg in the city and 26 mpg on highways, for 23 mpg combined. Ford, meanwhile, gave car shoppers a few powertrain options.

Keyword: 3 Advantages the 2022 Kia Telluride Has Over the Ford Explorer