Yeah, 2040 is a long way off, but if you’re a DeLorean automobile designer, you need to stretch the possibilities. And you need to break away from designing SUVs and hatchbacks. That’s where something like the 2040 DeLorean Omega comes in. It is a potential future stretch at where electrification, technology, and off-roading collide. 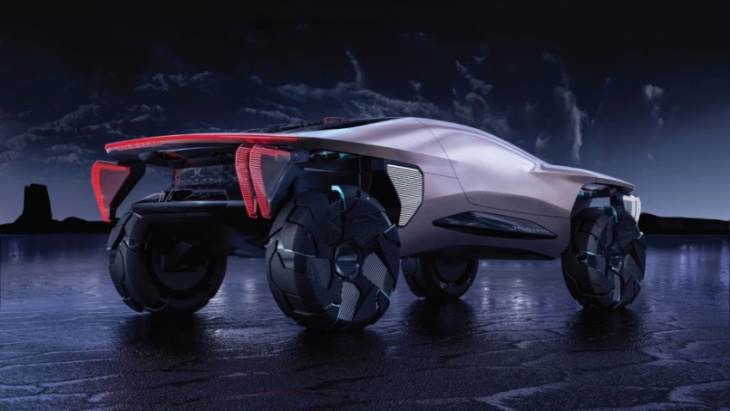 So, is this attainable? Maybe so, but probably not. There are a lot of liberties taken, with the presumption of a personal off-roader forging through rough terrain or jungles. But we love the exuberance. And especially, how compelling it is.

Would you drive the DeLorean Omega off-roader? 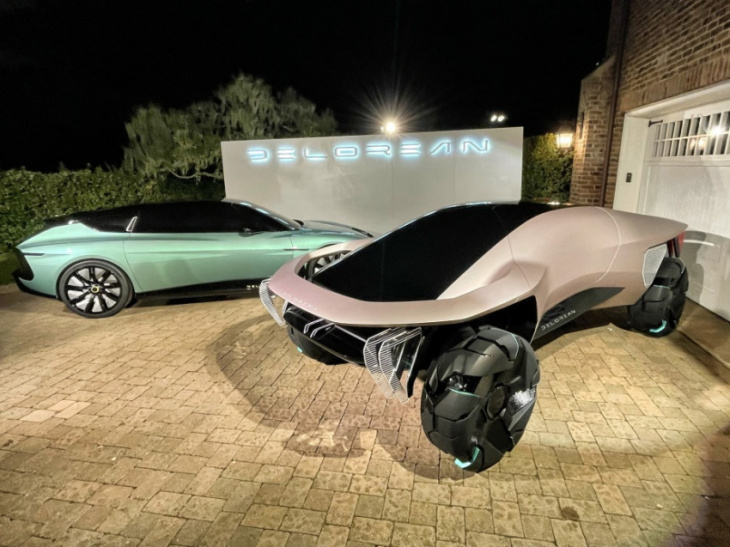 Admit it, you would love to bang this through some rocky terrain on the way to some isolated bar you can only get to with something competent going off the beaten path. Sure, a lot of what your see wouldn’t work. Those fragile taillights and similar parking lights would get torn off on the first ride.

And having side vision blocked doesn’t seem practical. Or is that one-way paint? The Omega “was designed with roots in Baja-themed off-road racing” and is a “departure from traditional automotive design,” says DeLorean. Well, yes and no. 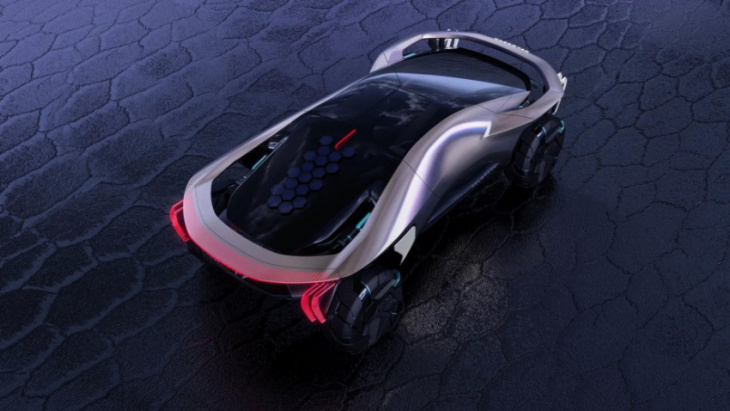 We’ve seen a more realistic concept going down the Omega’s direction from Audi. Its Ai: Trail foresees an off-road buggy with high style. With a coupe-style roof like the Omega, the silhouettes would be very similar. They are different designs for sure but have a similar vibe.

No, the Audi concept doesn’t have the swoopy gullwing doors. But aren’t those usually the first thing that goes into the concept, and the first thing to go once production is considered? But we’re not here to discuss the Ai: Trail.

There is plenty of ground clearance for any environment. Designers have integrated the tires and wheels. We love exposing the suspension. And with all of that room, we wouldn’t mind seeing more. After all, this is a machine.

Is this a real running prototype?

What you see is a mix of renderings and a 1:1 mockup pusher. There is no drivetrain and no interior. So you could call it a design exercise as much as a concept.

Will this ever see production? DeLorean hasn’t produced anything, let alone an off-road vehicle. But it does point to a couple of things. There is enough of a budget to allow for something like this, shown with the more realistic 2024 Alpha5 Plasmatail wagon concept. And it also shows it is using concepts to excite potential investors and shows it has plans far beyond its recently revealed Alpha5 coupe/sedan.

Rather than charging large, heavy Hummers through the desert, or into the woods, doesn’t something like the Omega make more sense? Small, lightweight, and fun-looking. We assume that driving it would be fun as well. We can only hope that we see these plying highways and backroads before 2040.

News Roundup: The new DeLorean and a Chinese Mini knockoff

This is the New DeLorean Alpha 5

10 Things To Know About the DeLorean

DeLorean Is Back, in EV Form, With the Alpha5 Sedan

DeLorean releases first-look at the Alpha5 with estimated performance specs

DeLorean Alpha5 is a 4-Seat Gullwing EV for the Future

Back to the future with DeLorean's new gullwing electric flagship

The four-seater gullwing EV should go on sale in 2024.

Four current DMC top executives were named in the lawsuit.

The reborn DeLorean isn't even out yet, and there's already a Hot Wheels version.

DeLorean’s much-hyped revival is facing legal challenges. Karma Automotive, the Chinese-owned firm that purchased some of Fisker Automotive’s assets in a bankruptcy auction, sued the new iteration of DeLorean in a Houston court over claims of intellectual property theft. Karma explained in court documents that it had previously worked ...

New DeLoreans will get sound systems by Cambridge Audio

Electric And no, it probably won’t pump out 1.21 gigawatts Here’s a question for you – in the Venn diagram of ‘Reads Top Gear’ and ‘Reads What Hi-Fi?’, how much overlap do you think there is? Because we’re wondering how much we have to explain Cambridge Audio and just how ...

DeLorean is now in the business of alternate timelines

Electric If this were Back to the Future, we’d need a chalkboard If you know your car history, you’ll remember that John DeLorean was a leading light in the American car industry who struck out on his own and started an eponymous car brand with a luxury sports car. You ...


View more: DeLorean is now in the business of alternate timelines

We also see the DMC-24, a real DeLorean concept sedan from the early 1980s.

Is it a DeLorean? Is it a retro revival of the Pony? No - it's a hydrogen hypercar from Hyundai!

DeLorean’s Daughter Is Furious About the New Alpha5

DeLorean: What is happening?

DeLorean will make a ‘small run’ of its Alpha2 concept

DeLorean Alpha and Omega Concepts: In Beta for Now, but Promising

DeLorean Alpha5 brings an old name back to the future

Karma Automotive's Lawsuit Against DeLorean Motors Reimagined: Here's What You Should Know

The DeLorean Returns as the Alpha5; Electric 2-Door, 4-Seater

New DeLorean Alpha 5 Turns to the Future, Forgets About the Past

The New DeLorean Debuts With the Alpha5 Concept

Great Scott, the DeLorean is back! Meet the 188mph Alpha5

The DeLorean is back

DeLorean Alpha5 Revealed As Electric Coupe With 300 Miles Of Range

DeLorean EVolved unveiling moved up to the 31st of May

DeLorean EVolved Will Reportedly Debut Sooner, On May 31

New DeLorean Debut Moved Up, Now Set For May 31