Specifications of Kia’s upcoming electric flagship SUV appear to have been released to customers, along with estimated US-market pricing.

The Korean brand has given us an idea of what to expect from the upcoming Kia EV9 in a market research survey sent to a Kia Telluride owner and seen by Car & Driver.

It’s set to be offered with a choice of single-motor rear-wheel drive and dual-motor all-wheel drive powertrains.

Five variants were detailed in the survey, with the base single-motor model offering 149kW of power and 339Nm of torque and a claimed 0-60mph (0-96km/h) time of 8.5 seconds. 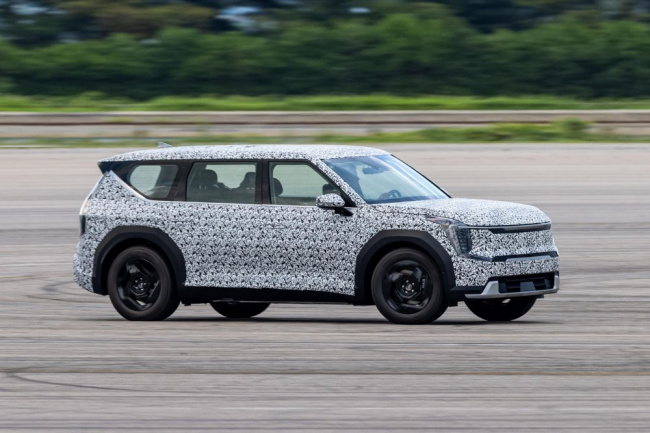 While the battery size wasn’t specified, this base grade has a claimed range of 354km but no towing capacity. It rides on 19-inch alloy wheels.

It’s unclear what test cycle these range figures are based off, but they could be estimated US Environmental Protection Agency (EPA) figures, and the EPA cycle is known to be quite strict. 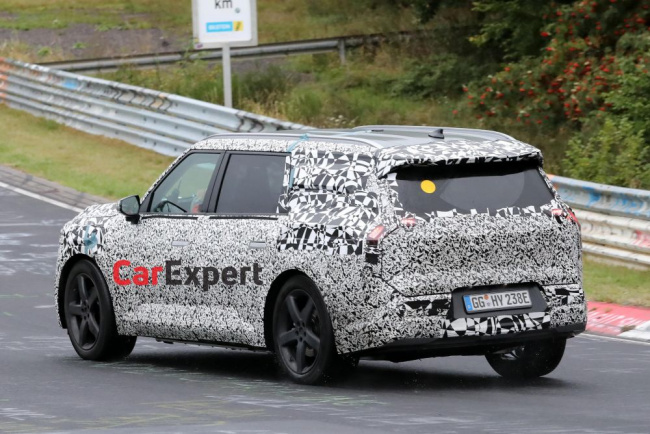 Range is reduced to 418km but towing capacity is increased to 1588kg. It rides on 19-inch alloy wheels. 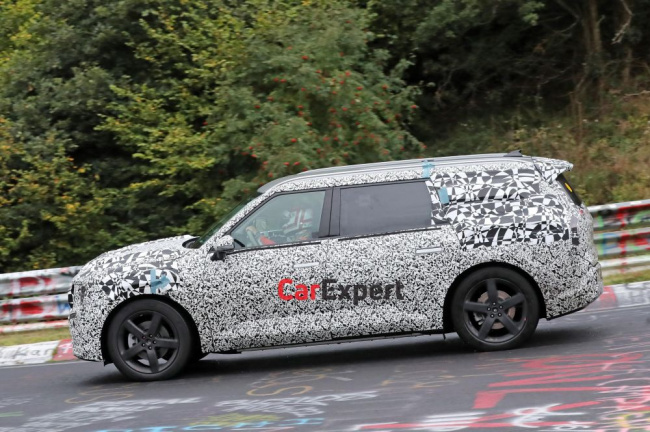 It’s the quickest member of the proposed EV9 family, with a 0-60mph time of 5.2 seconds. The survey also notes it rides on 21-inch black wheels with black exterior trim, plus an extra 10mm of ground clearance.

Kia in the US tends to give its highest-spec SUVs a more rugged look with black or dark grey exterior elements.

“Like other car companies, we are constantly evaluating the market and often conduct research on a regular basis to inform future product development,” a spokesperson for Kia told Car & Driver. 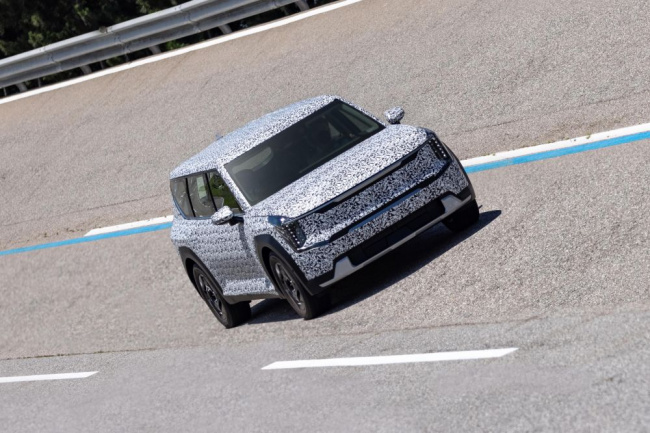 A spokesperson also told Electrek that final specifications are “very much in flux at this time as the launch is not until later this year”.

It remains to be seen how closely the EV9 hews to these proposed specifications.

It has yet to be revealed in production guise, though a debut is set for the first quarter of this year.

First shown in concept guise in November 2021, the EV9 will be Kia’s flagship model and the company’s Australian arm has said it’s putting its hand up for any EV it can get. 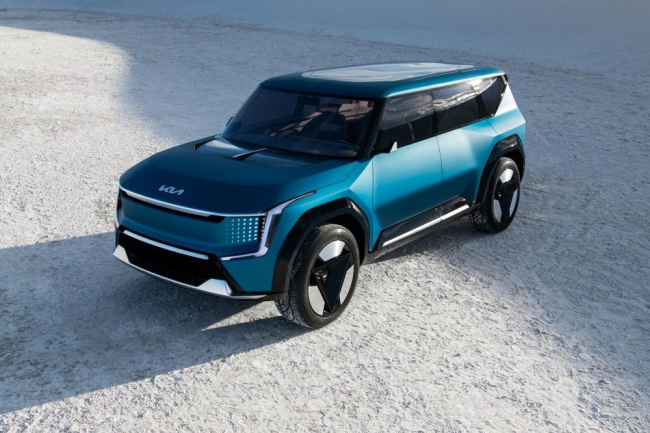 Kia released images of prototypes in the final testing phase last August, with EV9s being put through the paces both on- and off-road.

Through the camouflage we can see it bears a close resemblance to the Concept EV9, though some of that vehicle’s wilder elements like its 22-inch wheels and suicide doors have been either toned down or removed.

The production EV9 also has some visual kinship with the popular Telluride crossover, such as its vertical lighting elements and boxy shape, though certain elements have been exaggerated like the beltline up-kick and the wheelbase length.

It’s expected the production version of the EV9 will be a similar size to the concept. 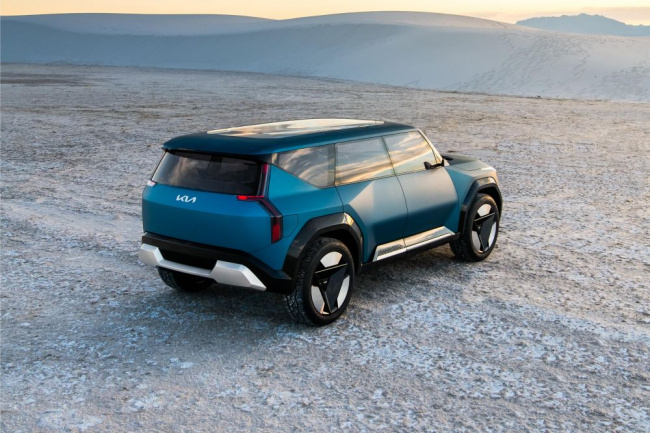 For reference, that’s 50mm shorter, 80mm wider, and 40mm taller than the Hyundai Palisade, a close relation to the Kia Telluride.

The Concept EV9 also has a 200mm longer wheelbase than the Palisade, for maximum interior room.

A large, boxy three-row SUV, the Kia EV9 will be built on the modular E-GMP platform which underpins the EV6, as well as the Hyundai Ioniq 5 and Ioniq 6 and Genesis GV60. 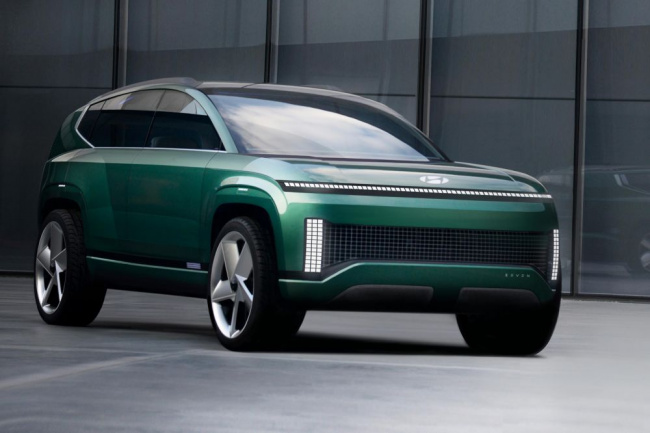 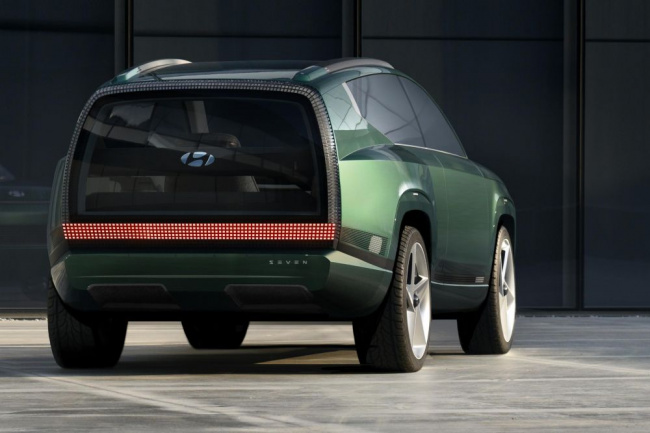 Hyundai also has a large three-row SUV of its own in the works, previewed by the 2021 Seven concept, set for a 2024 launch. It’ll wear the Ioniq 7 nameplate.

Genesis is also rumoured to be working on a flagship, three-row EV SUV of its own, possibly wearing the GV90 nameplate.