Jimmy Fallon and Ford CEO Jim Farley are checking out a pixelated version of the new pony. 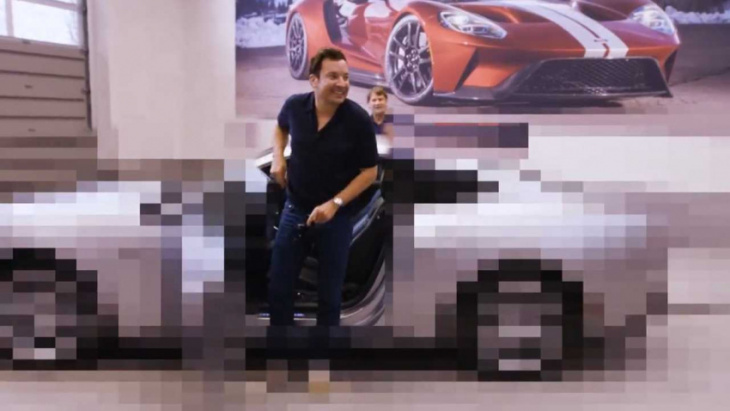 The big day for the Ford Mustang is almost here. The seventh-generation pony car will debut in Detroit on September 14, which means there’s time for one more teaser video to keep excitement boiling.

This time around, the teaser comes from the official Ford Mustang Twitter account. It’s a short 47-second video featuring The Tonight Show host and Saturday Night Live alum Jimmy Fallon checking out the car. He’s joined by Ford CEO Jim Farley, though unfortunately for us, details of the 2024 Mustang’s design features are pixelated. The duo also apparently mentions some sensitive information, as there are a few moments where the audio is censored with the sounds of a revving V8 engine.

Even with the blurred video, we get an idea of the Mustang’s proportions and basic shape. Things come into a better perspective if you zoom the video out, where we can make out a 5.0 badge on the fender. The 2024 model will retain the low roof and sharply raked fastback design that appeared on the sixth-generation ‘Stang in 2015. Previous teasers suggest some notable changes are coming to the rear of the car, notably with the absence of the black insert between the taillights. Spy photos and leaked images also point to a heavily revised front face with smaller headlights and a larger grille.

Inside, we can expect digital displays and that’s reinforced in the new teaser. Farley tells Fallon the “industry is going digital” while sitting in the car. The extent of the Mustang’s digital upgrades are as-yet unknown, but we do know the enduring pony car will still offer an analog experience. Paired with its V8 engine will be an old-school six-speed manual transmission for those who want to shift gears. An automatic gearbox will also be available.

Fallon and Farley have a curious connection that goes beyond this teaser video. The Ford CEO and legendary comedian Chris Farley are cousins, with Chris rising to fame as a star of Saturday Night Live. He exited the show in 1995, three years before Fallon would join the cast. Sadly, Chris Farley passed away in 1997.

The 2024 Ford Mustang will be revealed in downtown Detroit as part of a big celebration called The Stampede. You can watch the livestream event and reveal here at Motor1.com begining at 8:00 pm Eastern Daylight Time. In the meantime, check out the Rambling About Cars podcast for more Mustang talk and the latest automotive news, available below.

Keyword: 2024 Ford Mustang Teased For The Last Time Ahead Of September 14 Debut

“If you don’t want a [Mach-E] GT after you’ve driven it, you’ve got no blood in your veins,” according to a Ford executive. Ford wants to build “insanely great” electric vehicles, even if they’re not as environmentally friendly as they could be. That’s because it believes customers are choosing ...


View more: Electric cars must be 'insanely great' because customers don't care about being 'green': Ford

A Rare 1969 Mustang Mach Super Cobra Jet 3.91 A Mach 1 Meant For Street Racing 1969 Mustang Mach 1 Up For Restoration Soon The 1960s was definitely a decade for American muscle. Carmakers such as Ford were seemingly not content with base versions of their offerings, so they spiced them ...

Ford manufactured these first generation cars in March ’64 until 1973. The few of them which came out early in ’64 are still lovingly called 1964.5 Mustang. They are legendary in terms that they were the first pony cars of the world. Interestingly, Lee Iacocca and team threw a ...


View more: Here’s What Was So Special About The 1964.5 Ford Mustang

When Ford re-introduced its Ranger as a midsize truck in 2019 the concept made sense to Chris Skelton. “I don’t think a full-size truck is entirely necessary unless you’re a contractor,” the Airdrie-based driver suggests. “It’s certainly not an option I’d ever consider, they’re just too big.” While Skelton is ...