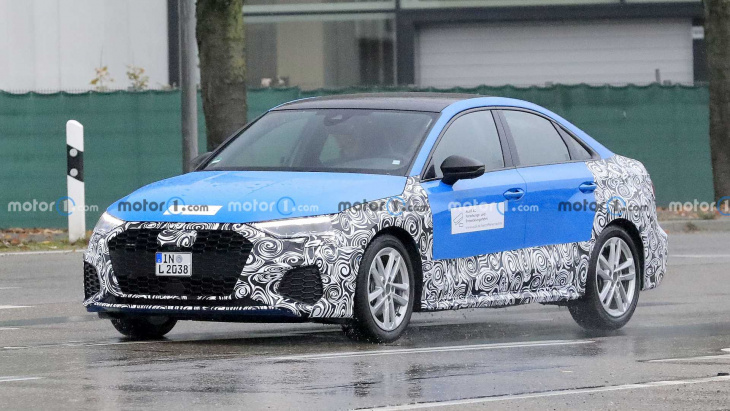 The compact sedan appears to be an S Line model with Quattro all-wheel drive.

Even though the A3 has been around for only a couple of years and therefore it still feels relatively fresh, Audi seems to be in a hurry to give it a mid-cycle facelift. Car paparazzi have spotted a disguised prototype of the compact sedan testing on a rainy day. Judging by the front bumper with its massive (and fake) air intakes, it appears we’re dealing with the S Line model. It’s not the fully fledged S3 since it lacks the quad exhaust tips.

Painted in Turbo Blue, the test vehicle has fairly small wheels by luxury car standards and appears to be hiding a “Quattro” badge on its corporate Singleframe grille. Curiously, Audi decided to hide the Four Rings both front and rear. Speaking of which, the facelifted A3 will likely wear the updated badge introduced last week with a flatter design and devoid of chrome.

The stickers on the front doors say the A3 Sedan was conducting a research and development trip. Cosmetic changes are likely to be limited since the only significant update we noticed is at the back where the red reflectors are vertical instead of horizontal. The fourth generation is still very much a new car, so Audi is unlikely to make any drastic modifications to how it looks.

The facelift could come along with the high-riding derivative we’ve been spying on for quite a while. It’s likely to be called A3 Allstreet to mirror the A1 Allstreet supermini updated for 2023 by changing its name from A1 Citycarver. The current car’s interior has been criticized for feeling plasticky and not premium enough for a luxury car, but it seems unlikely that will be addressed within the same generation.

This facelift or whatever Audi is planning for the car won’t be the last update for the A3 since the Ingolstadt-based marque has pledged to do a next-generation model. Unlike the current car, it’ll assume the role of an entry-level model following the demise of the A1 in the following years.

Audi will launch its last new ICE-powered car in 2025, and since the next-gen A3 will probably arrive after that, it can only mean the compact hatchback/sedan will morph into an EV.

Is the Audi A3 convertible?

What is Audi A3 Technik package?