Toyota invested $391 million in the San Antonio manufacturing plant specifically for the new Sequoia and Tundra. 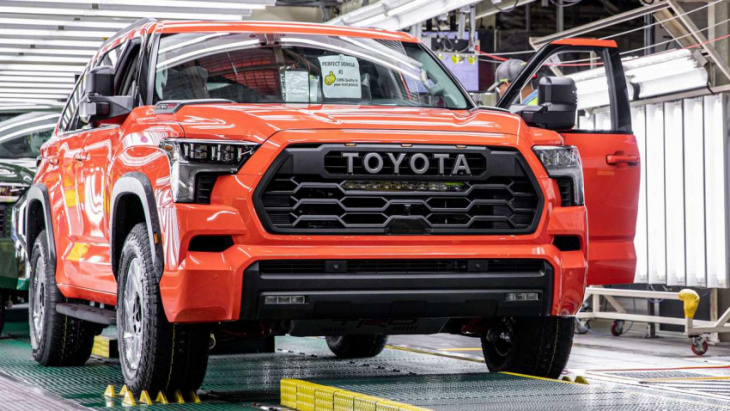 The last day of summer in the northern hemisphere was the first day of production for the 2023 Toyota Sequoia. The third-generation SUV is rolling off the line at Toyota Texas, the automaker’s large manufacturing facility in San Antonio and the new exclusive location for Sequoia production.

The sprawling facility employs over 2,600 workers, though Toyota says 3,600 employees and 5,300 suppliers prepped the plant for the 2023 Sequoia’s debut. $391 million was invested in the location to accommodate Sequoia production, which shifted to Texas from Indiana for the current generation. Toyota Texas also assembles the Toyota Tundra, which has been a staple of the plant since 2006.

“The third-generation Sequoia marks a new era of electrified vehicles that will help move us closer to carbon neutrality while delivering on and exceeding customer expectations for this iconic SUV,” said Kevin Voelkel, president of Toyota Texas. “Our team members are beyond proud to add the Sequoia to our Texas-built production line-up and take on new challenges as we deliver vehicles that customers love and fit their lifestyles.”

It’s been a minute since the 2023 Sequoia debuted. The covers were lifted in January 2022, revealing a completely new vehicle riding on a platform shared with the Tundra and Land Cruiser. However, with the Land Cruiser exiting the market in North America, the Sequoia inherits the mantle of flagship SUV in Toyota’s stable.

Taking on that role, the 2023 Sequoia trades the V8 from the outgoing model with a twin-turbocharged 3.5-liter V6 hybrid powertrain. It develops 437 horsepower (326 kilowatts) and 583 pound-feet (790 Newton-meters) of torque, a considerable upgrade from 2022. A 10-speed automatic handles shifting duties.

The powertrain is available across all Sequoia trim levels. That includes the entry-level SR5 with two-wheel drive, though it’s pricey at $59,795. By comparison, that’s nearly $10,000 more than the base SR5 from 2022. A range-topping Toyota Sequoia Capstone 4×4 will set you back $79,795.

Photo: Toyota Connected services in cars and via mobile apps are rapidly spreading across the auto industry. Many customers love them—until the free trials end and they have to start paying monthly fees to keep using these services. Good news if you plan to buy a new Toyota or ...

Why does the Wards award matter? The Tundra is now the most-powerful Toyota The i-FORCE MAX could be in more vehicles What other engines did Wards recognize? Truck motors are not efficient. They are, though, powerful and stout, and truck buyers like tried-and-true versions of engines they know because ...

Why is the Toyota RAV4 Hybrid so popular? Do you really save money with a hybrid? Does a RAV4 Hybrid need to be plugged in? What is better, a hybrid or plug-in hybrid? Toyota is no stranger to hybrid technology. The Japanese automaker has been dabbling in hybrid tech ...


View more: Why Is the Toyota RAV4 Hybrid so Popular?

A fitting send-off for the iconic off-roader

Electric vehicle market growth across the globe Toyota ranks last in decarbonization efforts Toyota sticking to its hybrid strategy despite calls for EVs Electrek’s Take It looks like Toyota is still not getting the message: people want electric vehicles, not hybrids. Despite all the evidence pointing to the inevitable ...

Akio Toyoda spoke to reporters on Thursday. YOSHIKAZU TSUNO / Contributor/ Getty Toyota’s president said he celebrated when the automaker topped the US sales list in 2021. “I actually did a little happy dance in my office,” Akio Toyoda told dealers, per Reuters.  Supply shortages are starting to bite, ...


View more: Toyota's president said he 'did a little happy dance' after the company dethroned GM to become the bestselling carmaker in the US last year