Porsche loves to pay homage to its past. When your halo model has been in production since the 1960s, there’s a rich history to tap into. The 2023 911 Carrera T is the latest to get the retro treatment, although it’s certainly no old-school sports car. Intended to evoke the feeling of the original 1968 Carrera T, the new one adds performance-enhancing goodies from elsewhere in the 911 lineup while reducing weight and trimming luxuries to create a purist’s sports car.

This isn’t Porsche’s first contemporary T model for the 911, as it relaunched the trim during the 991-generation car’s tenure. More recently, Porsche has introduced a Macan T SUV, as well as 718 Boxster T and 718 Cayman T models, all using a similar lightweight, performance-enhanced formula. The 911 Carrera T feels focused and provides just enough modern-day amenities to avoid being under-equipped. 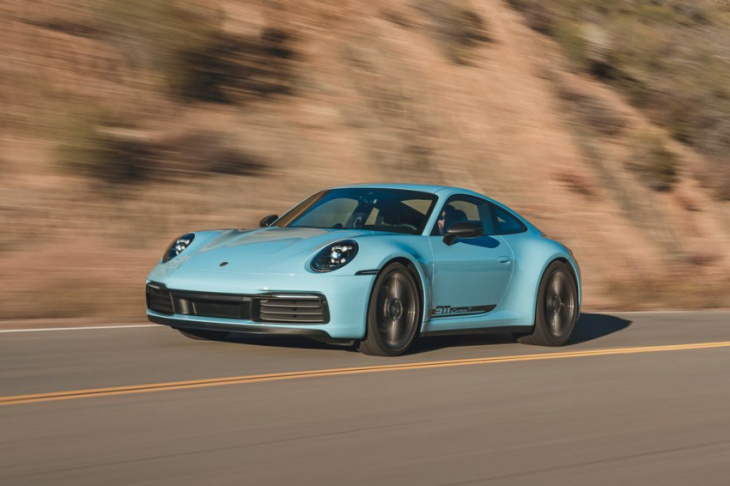 The entry-level 911 Carrera has a 379-hp twin-turbocharged 3.0-liter flat-six engine but comes only with an eight-speed PDK automatic transmission, whereas the more expensive Carrera S ups output to 443 horsepower and can be had with Porsche’s excellent seven-speed manual. The Carrera T essentially splits the difference, sticking with the 379-hp version of the flat-six but opening up the availability of the seven-speed manual. Porsche will build you a Carrera T with the PDK, but doing so negates some of the T’s weight savings. For what it’s worth, the automatic car is said to be quicker, with Porsche claiming a zero-to-60 time of 3.8 seconds for the PDK and 4.3 for the manual.

In addition to the standard stick shift, the Carrera T adds a mechanical limited-slip differential, Porsche’s PASM active suspension system with sport-tuned dampers, and staggered-fitment wheels and tires. The 20-inch front wheels wear 245-section-width rubber, while the 21-inch rears wear wider 305s. A rear-axle-steering system is optional, although our Gulf Blue example didn’t have it. All Carrera Ts come standard with the popular Sport Chrono package and feature Agate Gray exterior trim and a sport exhaust system with gloss-black tailpipes. 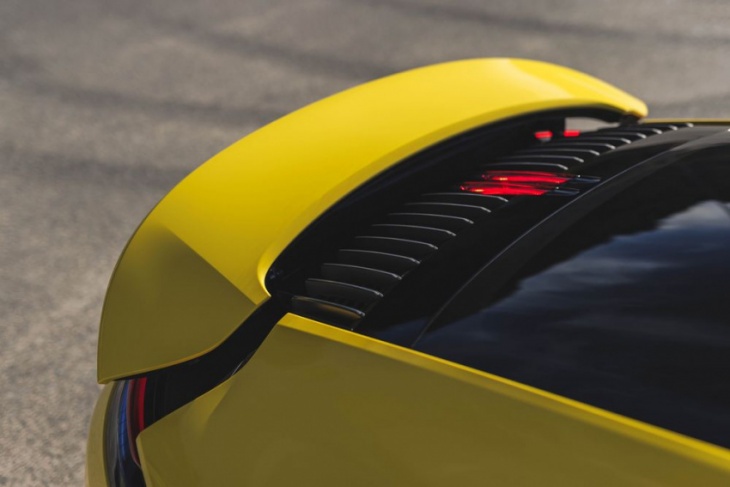 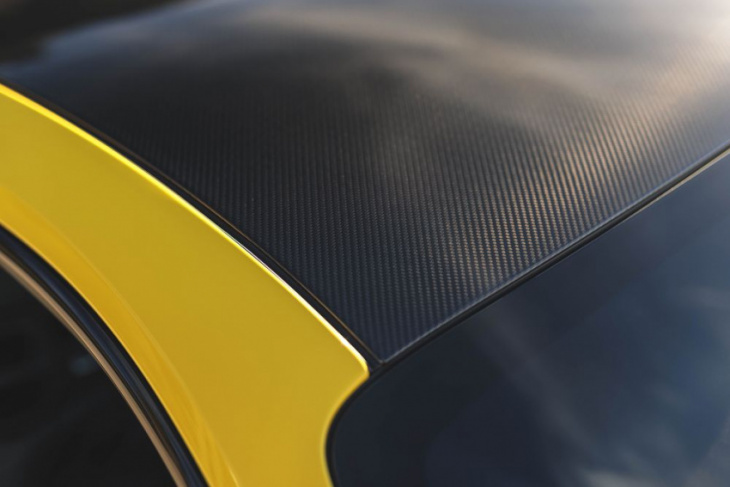 Porsche says the Carrera T weighs 100 pounds less than the base model despite the extra equipment. Weight-saving measures include deleting the rear seat, reduced sound deadening, a smaller battery, and thinner window glass. More sound permeates the cabin as a result, which is both a good and a bad thing. When hustling, you hear more of the engine’s melody, including the turbos spooling, but when cruising at steady highway speeds the engine note booms inside the cabin and can be a bit fatiguing.

The Carrera T is surprisingly approachable, and even novice drivers will find it easy to wind through corners with surgical precision. At the same time, its ride is surprisingly compliant, and the suspension does a good job managing rough stretches of pavement, rounding off the sharp edges of most bumps.

Twisty canyon roads—like the one where we drove the Carrera T near Los Angeles—are where the car feels most at home. Its steering is crisp and communicative, and so is the manual transmission, which has an unambiguous clutch takeup point. Although these controls feel entirely natural, the brakes take some getting used to. Early in the pedal travel, the brakes bite aggressively, and smooth modulation is a learned behavior. 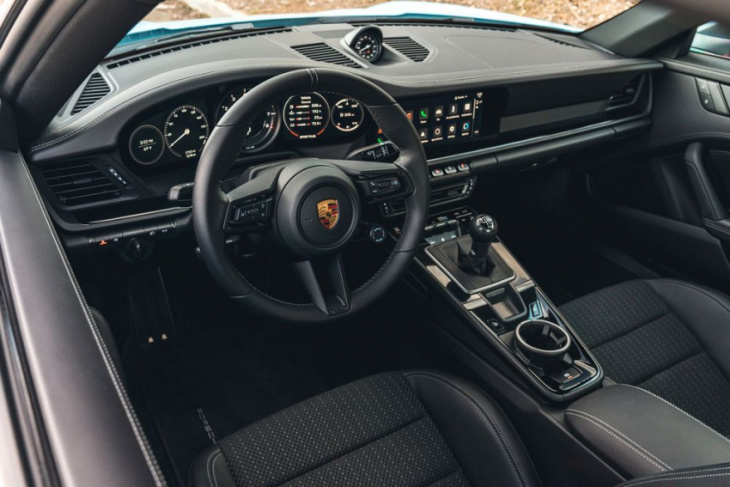 The all-black cabin of our test car appeared a little drab. While it’s nicely put together, it’s not quite flashy enough for the Carrera T’s $118,050 starting price. Besides removing the rear seats, Porsche has also stripped down features to save weight. That helps with the Carrera T’s purist-focused feel, but we’d have appreciated full-power-seat adjustments rather than power recline combined with manual fore-aft movement.

The seats themselves are comfortable and supportive, with bolstering suitable for hard driving but not uncomfortable for daily use. The optional Interior package adds some color inside by way of stripes on the seats, seatbelt coloring, and embroidered logos on the headrests and floor mats in your choice of Slate Gray or Lizard Green. Leather upholstery for the doors and dashboard is also available, as are 18-way power-adjustable seats. Porsche’s extra-aggressive carbon-fiber racing-style seats are also available.

As with other 911 models, there are few places to stash small items throughout the cabin, but the upside is that there’s a generous parcel shelf where the rear seats would normally be, offering space for a suitcase or a pair of duffle bags. Rear seats can be added back at no additional cost if you want them, but we’d guess most drivers would welcome the additional cargo room instead. 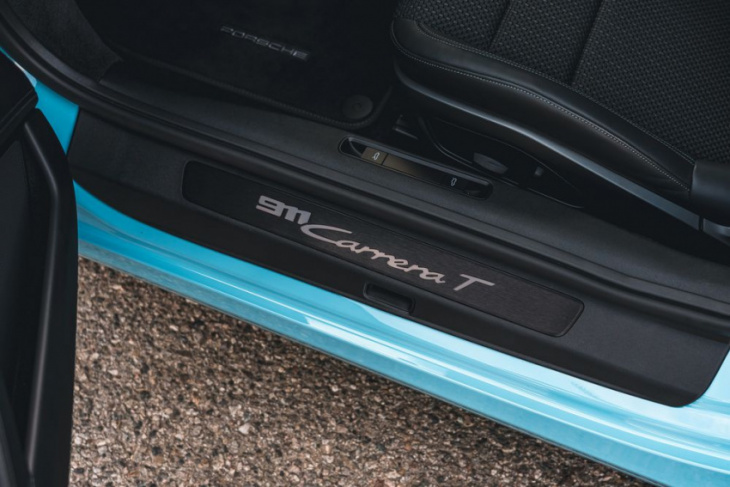 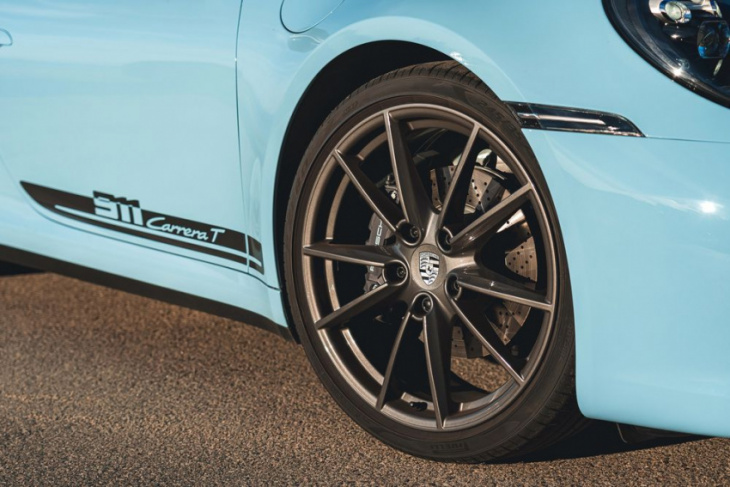 Overall, the Carrera T captures the spirit of the stripped-down ’60s original despite being a thoroughly modern car. The 911’s lineup is broad already, and it seems as though yet another variant would have trouble finding a niche. But Porsche’s aim with the Carrera T is to blend performance, simplicity, and relative affordability. For true enthusiasts, it’s a niche worth filling.