A base-engine 911 with some handling upgrades and a seven-speed manual is lots of fun. Shocker. 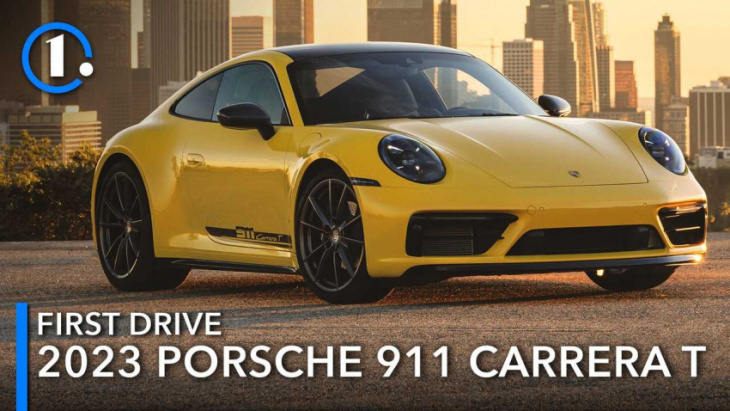 The Porsche 911 seems to find its way into the news more often than a certain date in January these days. The Stuttgart-based automaker is hellbent on making sure that every sub-section of the six-figure sports car market is covered, with trim levels ranging from the track-bound GT3 RS and the retro-tinged Sport Classic to the dune-hopping Dakar.

Those undeniably hot variants occupy the top end of the lineup, but what of the entry level? Is there any fun to be had in a rear-engined sports car that costs merely $120,000 or so? With the arrival of the 2023 Porsche 911 Carrera T, the answer to that question is an unequivocal yes, yes, dear Lord, yes. The 911 Carrera T features a turbocharged 3.0-liter flat-six that makes 379 horsepower and 331 pound-feet – the same engine as the base Carrera – but comes standard with some of the handling equipment as the more expensive Carrera S. All for $118,050 to start, including destination.

A vehicle’s verdict is relative only to its own segment and not the new-vehicle market as a whole. For more on how Motor1.com rates cars, click here.

Among those performance-enhancing drugs are PASM Sport suspension, which lowers the car 10 millimeters, and a mechanical limited-slip rear differential. Neither feature is offered on the base Carrera, mind you, leaving no doubt as to the Carrera T’s intentions. Underscoring its role as the [relatively] cheap-speed option in the 911 lineup, the Carrera T does away with rear seats and uses less insulation and thinner glass to shave weight. Tipping the scales at 3,254 pounds, the T is 100 pounds lighter than the regular Carrera (although adding the zero-cost rear seat back closes the gap a bit).

The ‘tweener model (that is not what the T stands for, of course) comes with its own unique visual signature, with Agate Grey mirror caps, bodyside decals, and rear deck slats that coordinate very nicely with the Titanium Grey wheels. This 911 is otherwise rather subtle, and I like the use of grayscale much more than today’s more common glossy black accents. The Carrera T has a more sophisticated appearance than its GTS sibling for this reason alone. 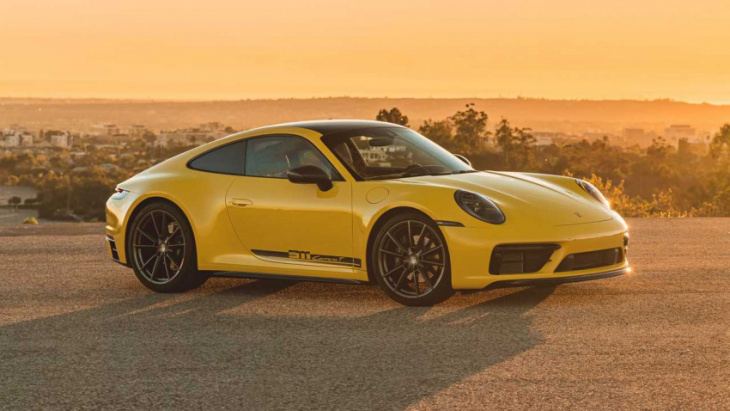 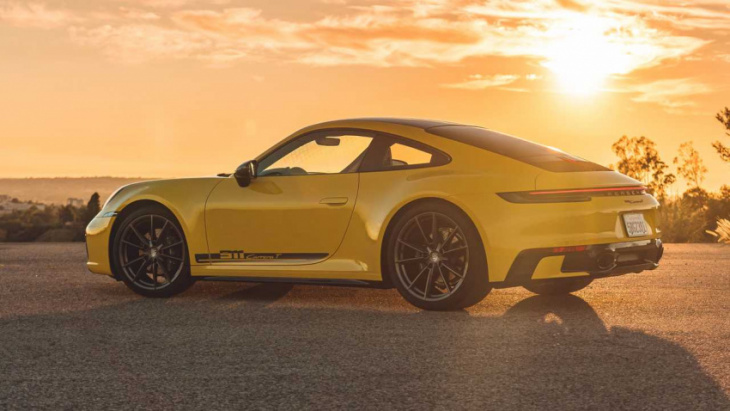 Inside, the Carrera T gets retro-fantastic upholstery, with checkered cloth seat centers and leather bolsters on standard four-way power seats – height and recline are electric, while fore-aft movement is manual. Sybarites might want the 18-way adaptive sport seats, but I think the standard chairs are perfect. If you simply must have the most, then Porsche will fit its Alcantara-trimmed, fixed-back bucket seats for $5,900 – my tester had them, and while they are supportive, they also are overkill, which doesn’t fit the T’s approachable mission.

The Carrera T’s best cabin feature is its standard seven-speed manual transmission – heretofore unavailable with the 911’s base engine – making it the most involving way to put a rear-engined Porsche in your garage for less than $120,000. And involving it certainly is, from the first turn of the left-side ignition switch to the ping-ping-ping its brakes and exhaust make as it cools down at the end of a long canyon run. 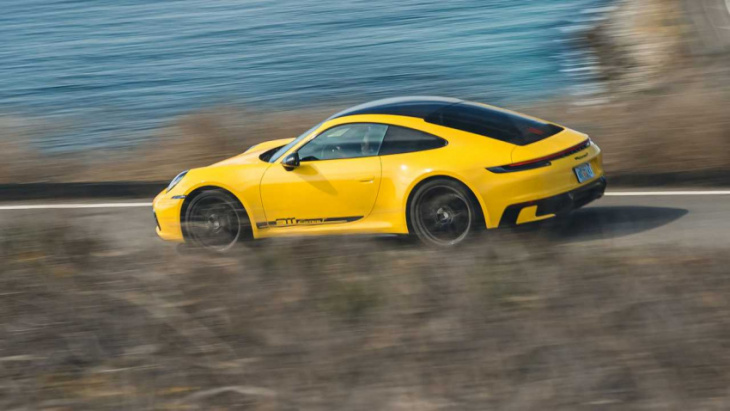 Porsche says that the Carrera T will hit 60 miles per hour in 4.3 seconds when equipped with the manual gearbox, the slowest of any current-generation 911. But while the numbers may not tell a very compelling story, the drive experience does. A multi-mode sports exhaust comes standard, and it gives the Carrera T a throaty snarl in its loudest mode, and the exciting whir of the turbochargers is plainly audible at low speeds. Lag is almost non-existent and torque is plentiful, so stirring the seven-speed stick is a matter of pleasure rather than obligation thanks to a positive-feeling lever and appropriately firm clutch pedal.

As fun as it is to row a Porsche through the gears on a freeway onramp, the 911 Carrera T’s raison d’etre is brisk motoring on a scenic road – the T stands for “touring,” after all. The standard 20-inch front and 21-inch rear wheels (the same design as the Carrera S wheels, by the way) come wrapped in Michelin Pilot Sport 4S rubber, conspiring with the communicative, heavy steering to provide immense confidence when nosing into a corner. Turn-in is just sharp enough to be fun without feeling nervous or darty, and the PASM Sport suspension seemingly eliminates body roll and provides impressive wheel control. 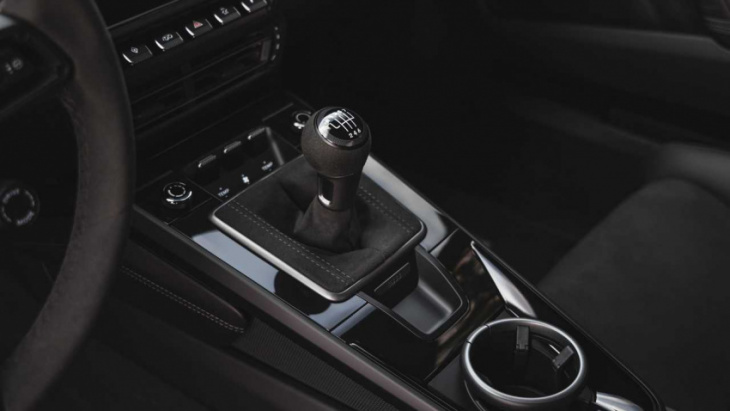 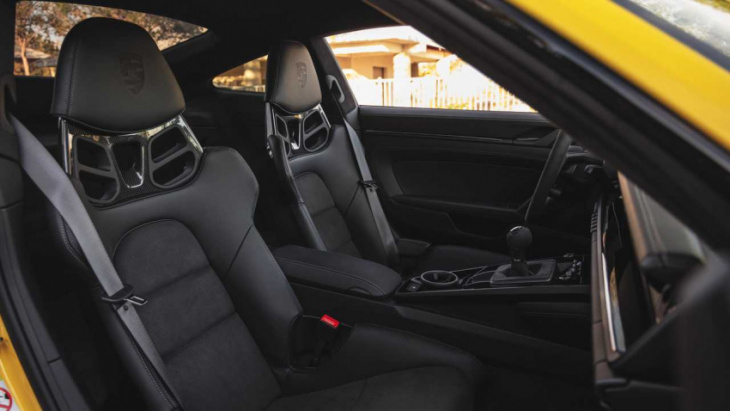 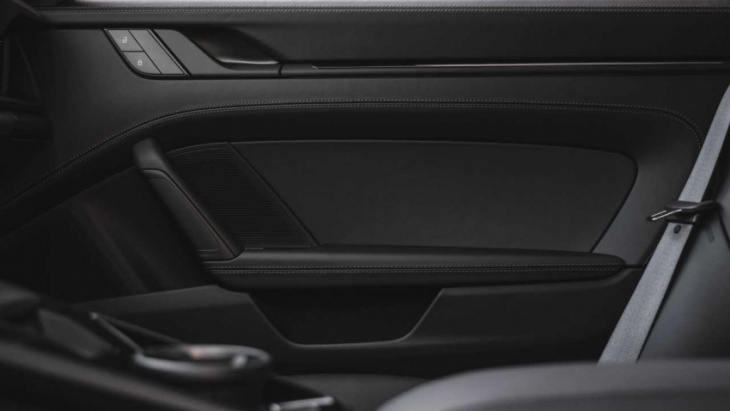 And in spite of its rear-drive–only format, the Carrera T never lacks grip or feels unstable thanks to that aforementioned limited-slip rear diff (dubbed Porsche Torque Vectoring). Get on the throttle a hair too early and the 911 will compensate by sending power to the wheel with the most grip – and if you’re dumb enough to fully disengage stability control on a public road, you’ll also get a totally controllable amount of oversteer. But even with the nannies on, the Porsche will hook up and go, helping you get where you want without interfering with the fun at all.

The 911 Carrera T isn’t available with carbon ceramic brakes, but you won’t miss them. The pedal is firm and progressive, so even if you enter a corner with a bit too much speed, it’s easy to dial in just enough trail braking to bring everything back in line. And I didn’t notice any fade at all, even after a long afternoon of hard driving through Angeles National Forest. The only negative symptom I could find in the base braking package was a thick film of dust on the wheels, so you might still want to invest in some ceramic – coating, that is. 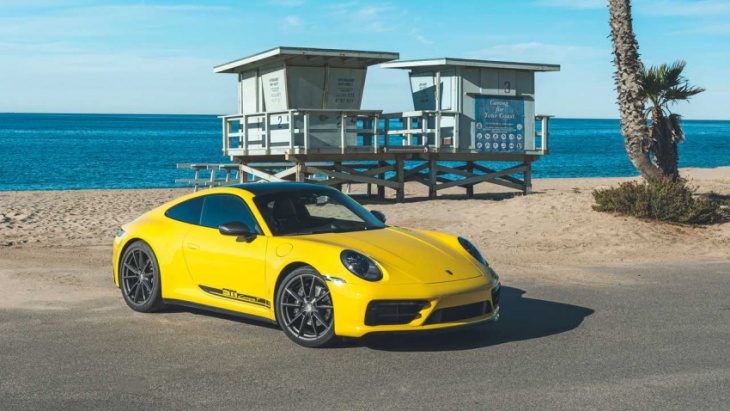 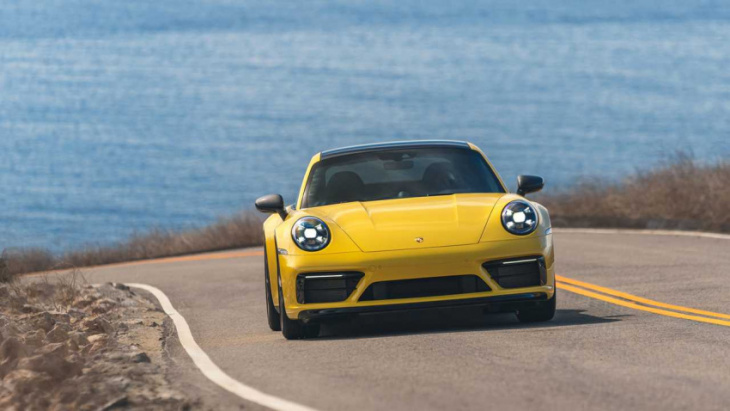 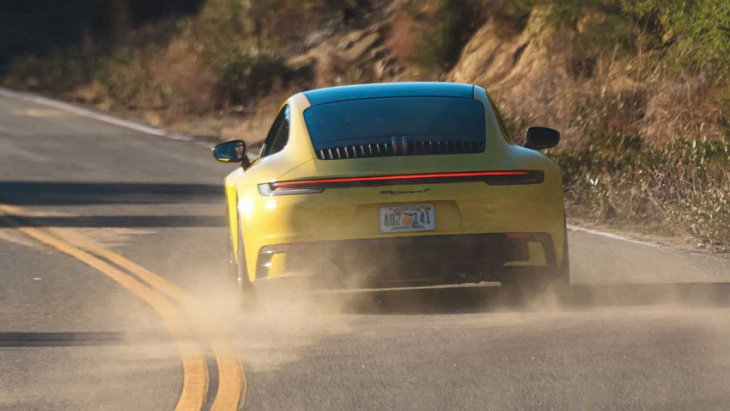 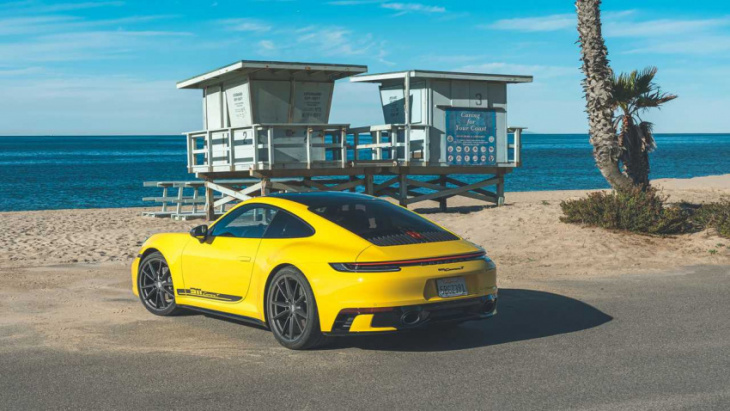 There just isn’t a limiting reagent in the Porsche 911 Carrera T’s formula. Unlike the bombastic Turbo S, power is snappy but not excessive, and the T offers a more street-friendly ride than the likes of the GT3 (yet is still willing to wag its tail if the mood strikes). The intimidation factor is missing too. If the words “cheap and cheerful” could ever apply to a 911, they apply to the Carrera T.

From that list, I’d keep the last piece only, giving me a commendably sporty 911 Carrera T for less than $125,000. And while that’s not pocket change, it still seems to be a pretty incredible value for sports car shoppers who prioritize a do-it-yourself transmission, manageable power levels, peerless balance, and a premium-feeling interior.

Driving the 2023 Porsche 911 Carrera T feels like you’re in on a little secret. It’s a special edition, but one that only the truly informed will notice. It’s a communicative and analog experience, but with a healthy dose of modern stability. It’s a hilarious thrill ride, but one that never feels like it’s going to end poorly. Although one of the more humble 911 debuts of late, the 2023 Carrera T deserves plenty of recognition all its own. It’s just that good.