After a successful but limited run in 2017, Porsche has revived the 911 Carrera T trim level for the 992 generation. The Carrera T slots just above the base 911 and below the Carrera S, borrowing a bit from each trim to create a sweet-spot model that feels like 90% of a 911 GTS at about 80% of the price.

So what comes from where? Let’s start with the star of the show: The 911 Carrera T borrows its engine from the base 911. The 3.0-liter, twin-turbocharged flat-six gas engine produces 379 horsepower and 331 pound-feet of torque. That power routes to the rear wheels through a mechanical limited-slip differential and a standard seven-speed manual transmission, although an eight-speed PDK dual-clutch automatic is available. The Carrera T also happens to be the only way to pair the base engine with a stick.

The limited-slip diff comes from the Carrera S, but the Carrera T inherits a lot more from its slightly more powerful sibling. It takes its staggered-diameter alloy wheels (20-inch fronts, 21-inch rears) from the Carrera S. It also borrows the two-mode PASM Sport suspension, in addition to the Sport Chrono Package, which includes that nifty timepiece on the dashboard and multiple drive modes available through a dial on the steering wheel. The Carrera T also picks up a two-mode sport exhaust, a sportier steering wheel and four-way power seats as standard, although slightly more hardcore buckets are also available. Rear-axle steering is available as a $2,090 option.

But wait, there’s more! To help keep mass in check, the rear seats have been deleted, some of the sound deadening has been removed, and the standard glass gets swapped out for thinner stuff. Throw a lightweight battery into the mix, and the Carrera T rings in at 3,254 pounds with a manual, which makes it 100 pounds lighter than a base Carrera. Of course, if you opt for the PDK, most of that weight savings is negated. But considering how much extra content is standard on the Carrera T, it’s still a win. 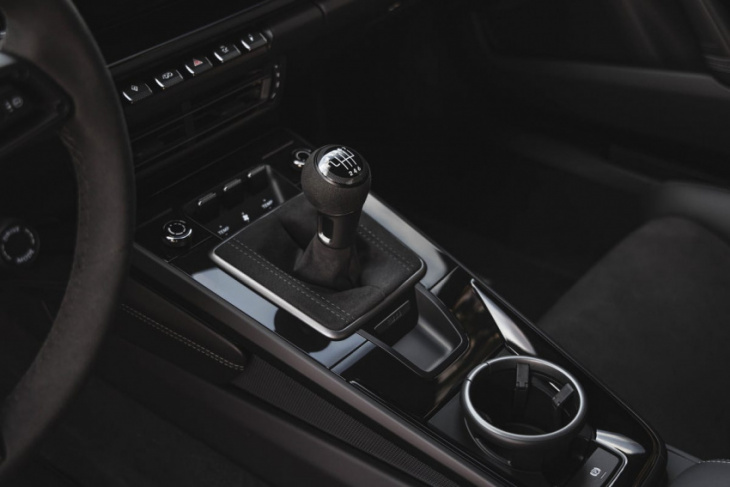 All those nips, tucks and tweaks coalesce into a package that is simply a delight on the road. As I worm my way up Angeles Crest Highway outside Los Angeles, the 911 Carrera T feels like the proverbial just-right porridge. The twin-turbo H6 provides ample thrust across the rev range, so long stretches in third gear still give me all the forward motion I need between tight mountain curves. And it sounds great the entire time, too; the only time the lack of sound-deadening material leads to exhaust drone is in seventh gear at highway speeds. And even then, switching the active exhaust to its quieter setting nips that problem in the bud.

While I could very well stay in third the whole way up Angeles Crest, the Carrera T’s six-speed manual is far too fun to ignore for long. Simply put, Porsche makes some of the best sticks in the industry. The clutch has the right amount of feedback, and swapping gears feels nice and precise. Auto rev-match activates in Sport and Sport Plus modes, and it’s better than my feet could ever be. 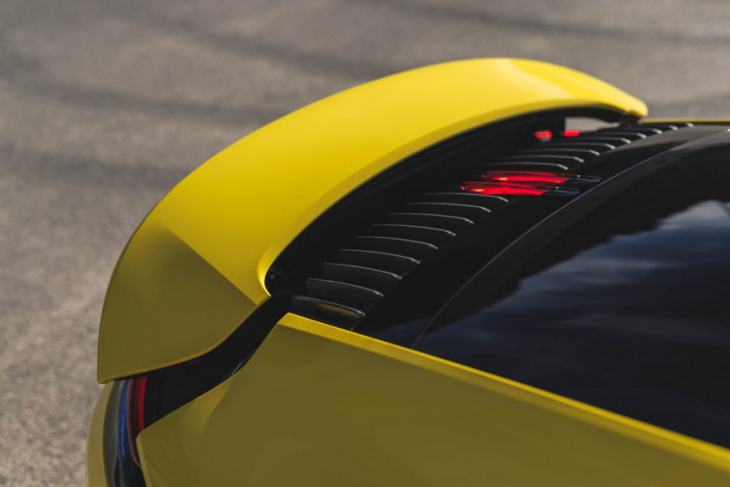 The 911 Carrera T’s deployable spoiler will automatically extend once you really give it the beans, but you can also activate it manually so you can hard-park to your heart’s content. Porsche

PASM Sport is a fabulous suspension. In its softer setting, the T is still sports-car stiff, but there’s enough compliance to daily-drive it without getting frustrated or uncomfortable. Turn the mode dial to Sport or Sport Plus (or just tap the dedicated suspension switch) and whatever hints of body roll existed disappear. All that’s left is effortless weight transfer and the confidence to cane the car even harder. Rear-axle steering is available, but the car I’m in doesn’t have it. While the agility it offers is tough to top, there’s still enough lateral hustle on tap without it.

Find the right car for you View Local Inventory

This 911 Carrera T’s speed-sensitive steering ($280) offers a bit more heft at speed, with excellent communication and directness that makes it one of the most rewarding wheels on sale today. The brakes are equally peachy: 13-inch steel rotors on each corner are happy to shed speed with each approaching curve, never feeling tired on my blasts up and down the mountain. The pedal is a little sensitive at the top of the throw, but really leaning into it reveals a pleasant linearity. 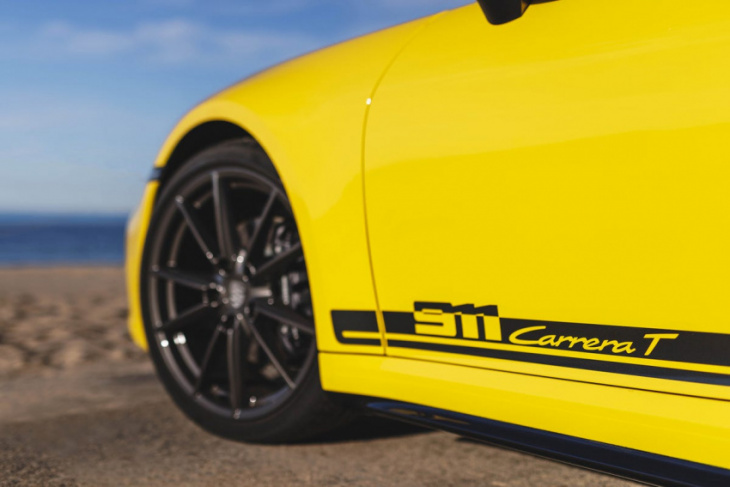 You can remove the Carrera T graphic on the side, but why would you? It looks cool. Porsche

The remaining bits of the 911 Carrera T experience are the same as I find in every other 911 on the market. Outward visibility is fabulous, and the four-way power seats provide excellent positioning for drivers of nearly any shape and size. The seats themselves are supportive, and the cabin never feels claustrophobic. The frunk will handle a couple of backpacks and coats with a bit of room to spare, and whatever doesn’t fit up front can get jammed where the back seats used to be. While I almost never look at it, the PCM infotainment system is easy to get used to, and the center console has just enough space to house my phone so it can run Apple CarPlay (or Android Auto, if you’re a green-bubble type) without being tossed about.

At Newcomb’s Ranch, the roadhouse that serves as my turnaround point on the drive, I run into several Porsche owners having a weekly hangout. Spurred by one curious 911 Turbo S owner, we discuss the 911 Carrera T and whether there’s such a thing as a right amount of power. This conversation reinforces my belief that the Carrera T is about perfect for my current situation. When I’m bombing mountain curves, with LA’s notoriously heinous traffic book-ending the journey, 379 horsepower is more than enough to keep things fun. The car is so impressively balanced that I feel any additional power would simply overwhelm the equation. Sure, who wouldn’t want 200 extra horsepower? But at no point in my journey am I feeling like the Carrera T is lacking in any conceivable way.

And that’s why I think the Carrera T is the true sweet-spot 911. Motive force alone isn’t everything; sometimes you must look at the bigger picture. The power it offers is approachable, and finally mating this flat-six to a manual transmission gives me that extra dollop of engagement that enhances the overall experience. It feels more than lithe enough for any sort of spirited driving, and with a $118,050 starting price (including $1,450 for destination), it also happens to be the second-least expensive 911 on offer.