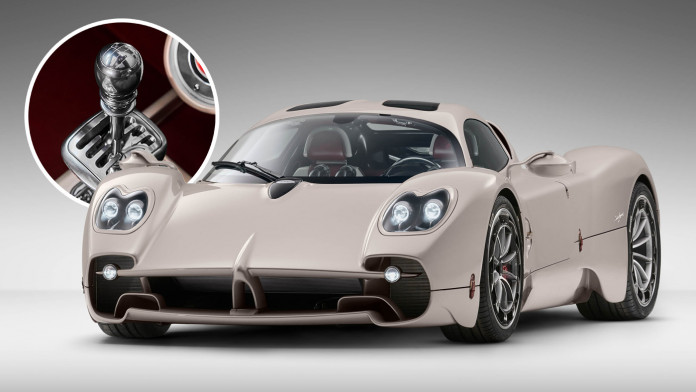 In the era of electrified supercars, massive infotainment screens, and quick-shifting automatic transmissions, Pagani is rebelling with the debut of the Pagani Utopia. Looking rather unassuming on the outside with minimal aero bits, this latest Pagani houses an AMG-sourced V12 engine in the middle with a seven-speed manual gearbox.

Before we go on with the hard numbers of the Pagani Utopia, let’s first appreciate the simplicity of the exterior. To the average person, it just looks like any other Pagani with a ‘Touring Package’. At the front, the headlamps resemble that of a Vespa Scooter or something Mitsuoka would have come up with.

The Pagani Utopia sports a flowing and curvy design without a multitude of spoilers. Pagani says the Utopia has incorporated the functions of the usual ‘wild’ aero bits into the Utopia’s overall shape, achieving greater downforce and reduced drag solely by means of its design. The chassis in use is a carbon monocoque chassis with composite materials like Carbo-Titanium and Carbo-Triax

Standing out on the exterior of the Pagani Utopia are the forged wheels with turbine-shaped carbon fibre extractors. The extractors draw hot air away from the brakes and reduce underbody turbulence. Wrapping the forged 21- and 22-inch wheels are a set of Pirelli P Zero Corsa tyres. Also notable on the exterior is the brand’s signature titanium quad exhaust. Coated in ceramic to dissipate heat more efficiently, the exhaust system weighs just a tad above six kilograms.

In the cockpit, the Pagani Utopia’s rebellion against current trends continues. The only digital display sits behind the steering wheel, and everything else is analogue. When combined with the Burgundy colour scheme, the cabin gives off steampunk vibes. There are no huge infotainment screens in the Utopia as the company aims for a more timeless look.

Pagani has taken the opportunity to be creative with every component of the car. They have even re-invented the wheel (quite literally) by fashioning the steering wheel from a solid aluminium block (from the spokes and hollow rim to the steering column boss, which contains the airbag). Also made from a single block of metal are the pedals. The manual seven-speed shifter is exposed, being the main highlight of this V12 supercar.

Powering the Pagani Utopia is a Mercedes-AMG-sourced 6.0-litre V12 engine that makes 864 hp @ 6,000 rpm and 1,100 Nm @ 5,900 rpm. The highlight of the powertrain is the seven-speed manual gearbox, which Pagani admits was not an easy task to design.

Thus, Pagani sought assistance from Xtrac, a high-performance transmission manufacturer, to create a seven-speed manual gearbox with synchronizer rings that could handle 1,100 Nm of torque. Customers can also opt for an automated version of the seven-speed manual box in case they’re not fond of shifting their own gears.

As for suspension, the Pagani Utopia sports forged aluminium alloy independent double wishbone suspension all around with helical springs and electronically controlled shock absorbers. The brakes are by Brembo, being ventilated carbon ceramic disc brakes with six pistons each at the front and four pistons each at the back.

Debuting with a symphony composed by Vincenzo Parisi and performed by the Symphonic Orchestra of the Milan Conservatory, the Pagani Utopia challenges the current trend of supercars and hypercars. Only 99 units of the Pagani Utopia will be made and have already been assigned to privileged enthusiasts.