The big e-Ute has everything the EQS sedan offers, plus more room and a surprising amount of off-roadability. 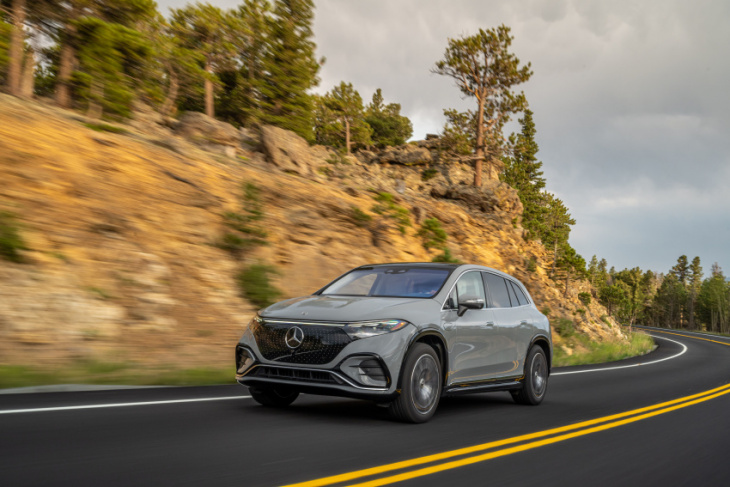 Mercedes-Benz continues its march toward carbon neutrality with this latest addition to the all-electric EQ family: the EQS SUV. It is big, it is loaded, and it is powered by nothing but electrons. The EQS is the latest step forward in what Mercedes promises will be “the next era of mobility.”

“We call it Ambition 2039—our strategy to create a carbon-neutral fleet of passenger vehicles across the globe within the next 20 years,” Mercedes says.

And there is no turning back.

“What I think we should be certain about is that we need to decarbonize,” says Mercedes CEO Ola Källenius in a satellite interview from Stuttgart recently. “So, if you’re looking at all the scientific research, I speak from time to time to a fellow Swede named Johan Rochstrom who leads the Potsdam Institute (for Climate Impact Research in Germany. He’s also a professor in Earth System Science at the University of Potsdam).

“That is one of the leading climate research institutes in the world. He’s one of the leading scientists. If you speak to a guy like that you take all the political noise out of the debate and you look at what’s happening. It’s very easy to come to the conclusion we need to do something.”

And that something is electric cars and SUVs. Mercedes has a first-class seat on the electric gravy train and it’s powering full-speed ahead.

“We have made a very clear decision as far as Mercedes-Benz is concerned,” Källenius says. “Once you have the sense of urgency, somebody has got to solve the problem. And where does the problem end? On the desk of our engineers.”

So far, those engineers have delivered the Mercedes EQS sedan and the smaller EQB SUV, both on the market now. The EQE sedan and SUV are coming. But herewith they deliver the newest entry, the EQS SUV. 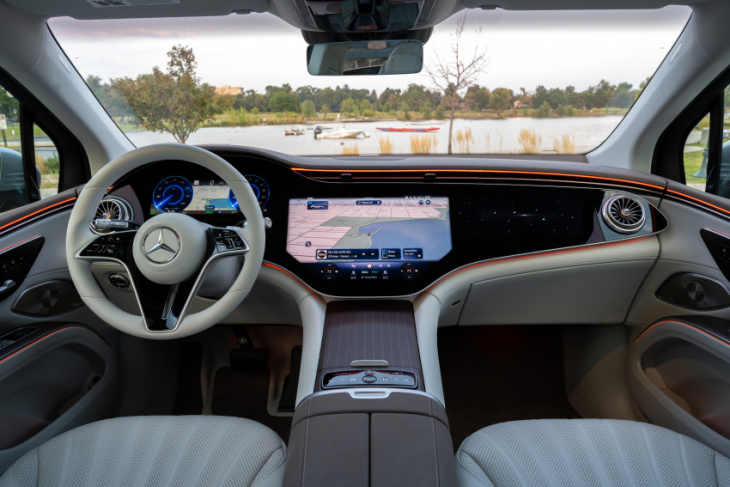 “The SUV offers plenty of space, comfort and connectivity for up to seven passengers in its avant-garde, luxurious interior,” Mercedes touts. “Thanks to powerful electric motors, responsive 4Matic all-wheel drive and an intelligent OFFROAD driving mode, the EQS SUV is capable of tackling light terrain with ease.”

It is big—a feeling you can’t avoid once you crawl inside, but if you look at the specs it sits on the same 126.4-inch wheelbase as the EQS sedan. The front and rear overhangs are more abbreviated, so it’s actually a little shorter than the sedan overall (201.8 inches versus an even 207). Of course, it has more ground clearance, as much as 8¾ inches when you crank the adjustable air suspension to off-road and gain an extra inch.

And it can go off-road. You may be surprised how much you can accomplish in the dirt in one of these luxo-liners. Mercedes set up a steep off-highway loop in the mountains outside Denver for us, and it was really something to see the big brute crawl up some fairly steep dirt on its M&S tires and then use its optional 10 degrees of rear steer to wrangle through tight turns. The turning radius is 39 feet with the stock four degrees of rear steer and 36.4 feet with optional ten degrees. 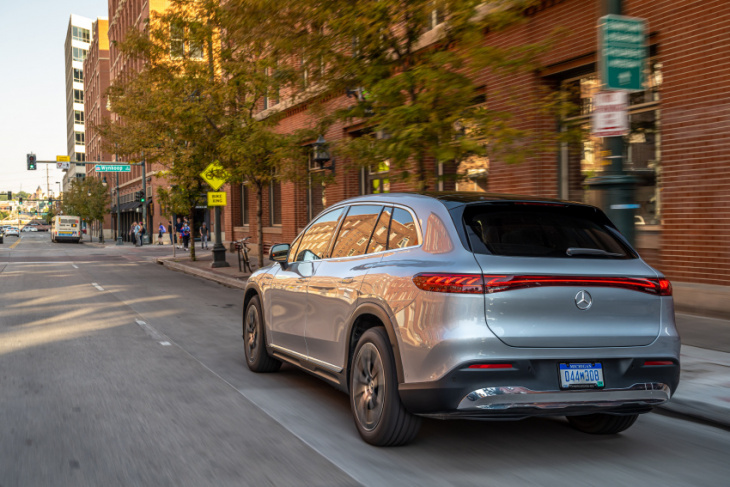 Most of the time EQS SUV owners will be confined to city dwelling, where the optional seven-seat configuration will coddle the carpool way more than the carpool deserves. I actually sat in the third-row seat and put the second-row seatback into position and I survived, albeit somewhat claustrophobically. Middle and front-row occupants will have no complaints at all.

Inside, the EQS SUV is very much like the EQS sedan, albeit with a higher roof. In front of you sprawls the optional and possibly overindulgent MBUX Hyperscreen, wherein MBUX stands for Mercedes-Benz User Experience. It is the be-all end-all of automotive dashboards, at least until they get holograms inside cars. It runs virtually the width of the dash, transmitting pretty much any information you could ever imagine you’d want, and taking requests for infotainment you might not have known you needed. If you weren’t interested in overindulgence, you probably wouldn’t be shopping EQS SUVs.

There is up to 74 cubic-feet of cargo space inside, too. Underneath all this luxury is the same all-new chassis on which rides the EQS sedan. It’s not a converted ICE chassis, but one made just for electric motors and big batteries. In this case the battery is 108.4 kWh, enough to keep the 6228-pound brute of a ute going for up to 300 miles. 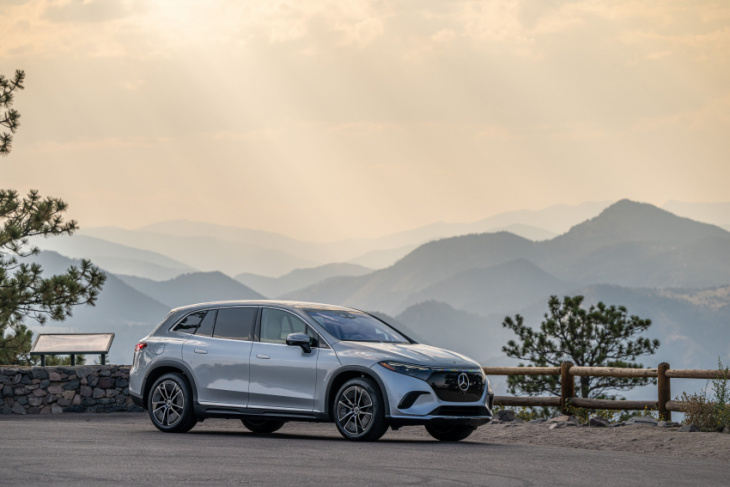 The EQS SUV launches in two models: the 450+ offers a rear-mounted electric motor driving the rear wheels with 355 hp and 419 lb-ft of torque, while the EQS 580 4Matic gets one motor in front and one in the rear, with 536 hp driving all four wheels. The EQS 580 also makes a hill-climbing 633 lb-ft of torque. More versions are expected, including a Maybach somewhere down the line that may look like the car shown in Munich last year at what used to be known as the Frankfurt auto show.

The SUVs offer ranges of 285 miles for the EQS 580 4Matic and 305 miles for the rear-wheel-drive-only 485+ (though some engineers at the launch were quoting 300 miles for the RWD model). Towing capacity is just under 4000 pounds, though how much that affects range was not included in the discussion.

I drove both models on many different roads, including twisty mountain two-lanes. There, the 6000-pounder wrestled the corners mightily, cranking down the body almost before it could start rolling. The large SUV had to manage its mass somehow and comes away feeling artificial to anyone raised on cars with passive springs and shocks, which is to say, all of us.

Of course, no one buys a three-row SUV for handling. In city and suburban traffic, where these SUVs will spend their entire lives, the EQS left me wanting for nothing. All the infotainment, the “Hey Mercedes” voice activation, and even the adjustable disco bordello interior light trim package were all luxurious. 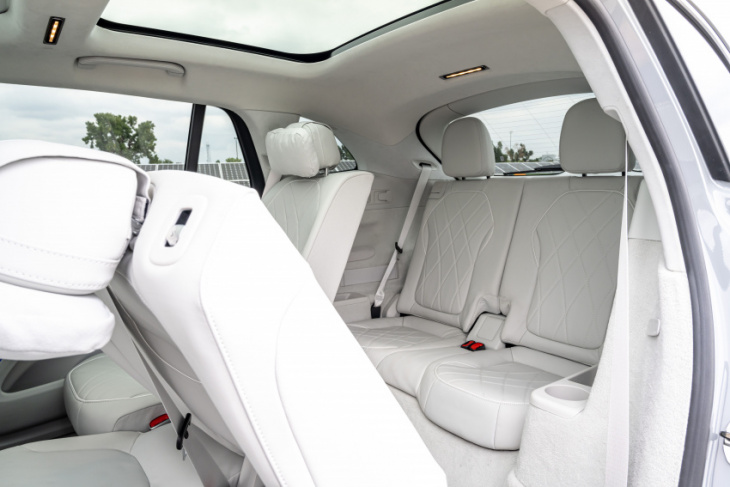 What would you compare this to? A summer’s day? How about a GMC Yukon or a Ford Expedition—bigger than an EQS but only half the cost? They pollute, too. The Mercedes ranges from $105,550 for a RWD EQS 450+ Premium to $133,350 for the top-of-the-line EQS 580 4Matic Pinnacle and spits out only electrons in its wake. The Lexus LX 600 is still fairly new, costs 20 grand less to start, and is loaded with luxury, but it has tailpipe emissions and an ugly spindle grille.

The Range Rover is about ten grand less and loaded with prestige among the swanky real estate agents who crave them, but dependability rests at the bottom of the JD Power charts. The Tesla Model X has been around forever and has a similar number of surprise and delight features, but is matched with outrage and PO features, too, at least according to anecdotal information, which is as close to statistically significant data as we can get on that SUV.

So where does the Mercedes EQS SUV fit in this crazy, changing world? Mercedes’ history of new and innovative engineering backs up the brand as it boldly goes into a zero-carbon future. Unlike at Tesla, at Mercedes there are 400 guys named Gunther all making sure the door latches work, and even more than that, making sure the drivetrain lasts forever. Or close to it.

Welcome the all-electric future. And if you have more than 100 large to spend on a car, welcome the new EQS SUV into your driveway charging port.

190E The Mercedes W201 is now four decades old. And, if you’re actually old enough to remember (count us out for that one), it was called the ‘Baby Benz’ at its launch. However much that title wants for some imagination, it is rather fitting – Mercedes’ big push into ...

The electric Gelandewagen, called Mercedes-Benz EQG, is due to be unveiled sometime in 2024. Even though that is still at least a year away, Mercedes-Benz engineers are already hard at work to make sure it’s as capable as the reputation its name carries, or even more. As part of ...