New CLA to get a facelift for 2023, with an updated design for both the saloon and Shooting Brake bodystyle 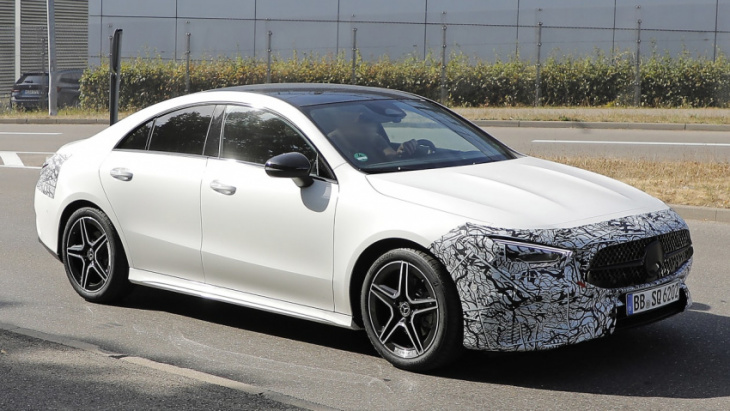 Updated versions of the Mercedes CLA saloon and Shooting Brake estate model have been seen testing, ahead of an anticipated debut later this year. The refreshed models should make it to UK showrooms in 2023. Although changes are expected to be minor, they should help the CLA compete against the latest BMW 2 Series Gran Coupe.

The Mercedes A-Class has already been seen testing, and like the model it’s based upon, cosmetic changes to the CLA appear mild. Both cars are expected to receive a revised front grille using a mesh pattern, giving the facelifted models inline the same design theme as recently-released Mercedes models.

A new Mercedes front badge could also hide sensors for advanced driver-assistance systems (ADAS). The sides have been left uncamouflaged during testing, suggesting there will be no changes between the front and rear of the vehicle, however a new alloy wheel design is likely.

At the rear, the clearest change will be to the rear lights, modernising their aesthetics as well as bringing the CLA in line with newer Mercedes models. The shooting brake is expected to receive the same styling tweaks. Inside, the infotainment and switchgear is likely to remain unchanged, although the latest Mercedes software may bring some subtle changes to the user interface. More notable changes to the interior are likely to come in the way of refreshed seat designs, with a possibility of different colour materials available.

Engine choices will likely remain the same as the outgoing model, although Mercedes engineers may make mild tweaks to boost efficiency and power from the existing engine choices. Currently the CLA is sold with a 1.3-litre and 2.0-litre petrol, along with a 2.0-litre diesel. The plug-in hybrid model is currently paired to the 1.3-litre petrol engine making a combined 215bhp, and will continue as a favourite among company car buyers. The sportier CLA 35 AMG, and CLA 45 AMG are also expected to continue in the saloon, with no word yet on whether the more powerful version will be offered in the CLA shooting brake.

Prices of the current Mercedes CLA start at £33,070, and we expect this to rise slightly for the facelift model.