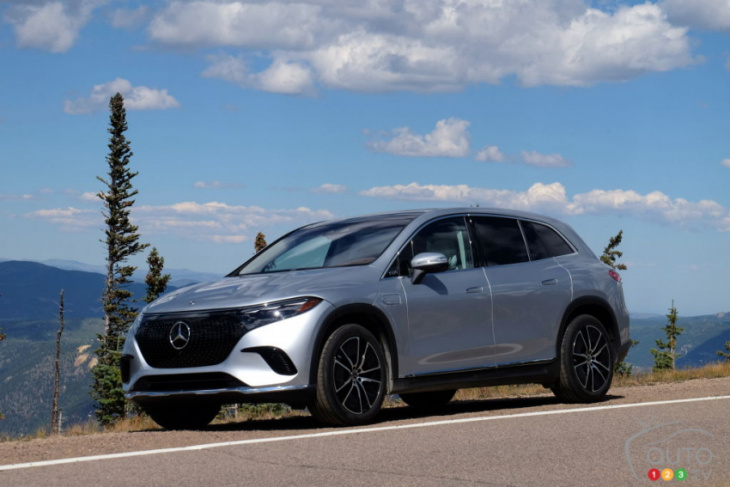 Auto123 gets in a first drive of the all-electric 2023 Mercedes-Benz EQS SUV.

Denver, CO – I think it’s probably safe to say most future owners of the 2023 Mercedes-Benz EQS SUV – or of any luxury vehicle costing upwards of $160,000 (CAD) for that matter – will never balance their vehicle on two wheels. At least not intentionally. But we did.

This little exercise we carried out on the “moguls” section of an off-road course near Denver, Colorado was born from the German automaker’s understandable desire to show us some of the extraordinary things its first all-electric SUV can do. Some of which go far, far beyond what any sane owner of such an expensive vehicle would ever risk.

The drive program we attended included much more than that off-road portion, of course, and the large scale of the event underscored the importance to Mercedes-Benz of the new all-electric flagship SUV about to inhabit its lineup. 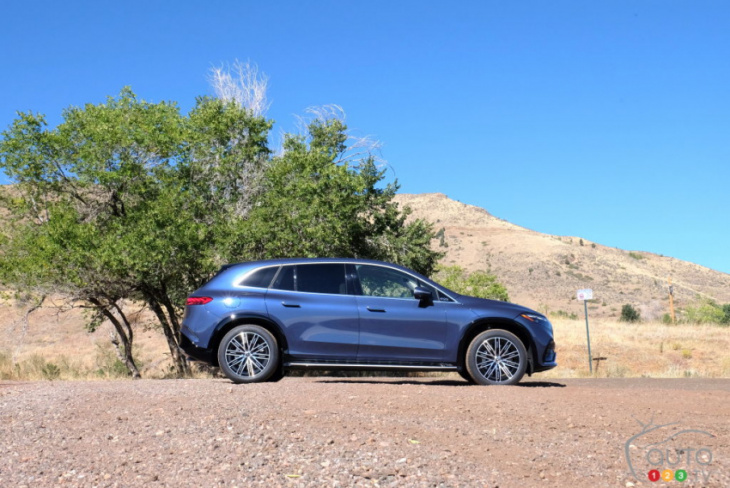 Non-identical twins
In some ways, we already knew a lot about the EQS SUV, from the EQS sedan already on the market. Both are built on the same EV-specific platform, for one, and many of the elements, particularly inside, are the same in both configurations. So we get the same hyper-impressive Hyperscreen that dominates things in the front row (in certain versions), the same super-comfortable, soft-head-cushion-toting seats both in front and in back, including the optional Executive Rear seat, the same extremely quiet cabin, the same first-class finishing and attention to detail, etc. etc.

At 3,210 mm, wheelbase is the same as the sedan as well, while overall length is 5,125 mm (50 mm shorter than the sedan). But this is an SUV and so it stands higher off the ground (height is greater by 20 cm), and it weighs 2,804 kg, compared to 2,585 kg for the car; there are thus questions of weight distribution and handling and acceleration abilities, for example, that are distinct from what we saw with the EQS sedan.

The over-the-air updates introduced in the EQS are here as well, but the whole package has been expanded, though mostly the new functions haven’t been activated yet and will only work in some areas. 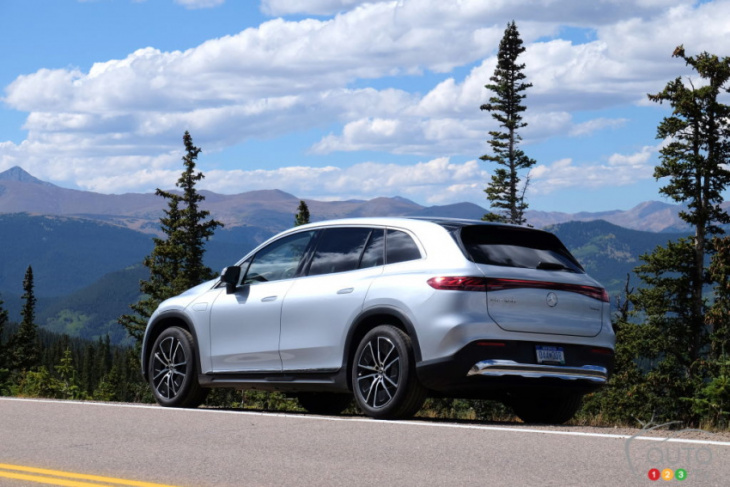 The EQS SUV in Canada
Canadian buyers get two trims to choose from, the EQS 450 4MATIC and the EQS 580 4MATIC, both of course with two motors and thus all-wheel drive. Then there are trim packages, also similar to what’s offered with the sedan: Premium, Sport, Sport Interior, Premium Rear seating and Executive Rear seating. Finally, the SUV can be had in five- or seven-seat configuration, though as you’d expect, those third-row seats are strictly kid stuff or for emergency use only.

There are five drive modes available to drivers in both models offered in Canada: Eco, Comfort, Sport, Individual, and, yes, Offroad. That’s for when you want to risk doing something to your $160,000 Mercedes. On the other hand, you might not do anything, because you’ll able to manoeuvre in some mighty tight spots thanks to the heright clearance, raised when in that mode, and especially the standard 4.5-degree rear-wheel steering capability (there’s an option for a 10-degree system). 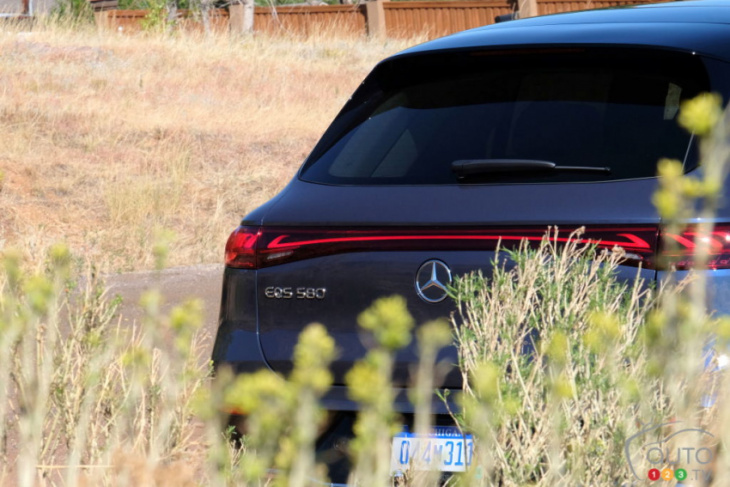 Cost
As for pricing, we don’t have specifics yet but Mercedes has ventured estimated starting prices of $140,000 CAD for the 450 4MATIC and $158,000 for the 580 4MATIC. The latter version comes standard with Mercedes’ HEPA (High-Efficiency Particulate Air) filter as well as the 1.41-metre-wide Hyperscreen (the 450 “makes do” with the S-Class sedan’s 12.3-inch instrument cluster and 17.7-inch media display, unless you option in the Hyperscreen). 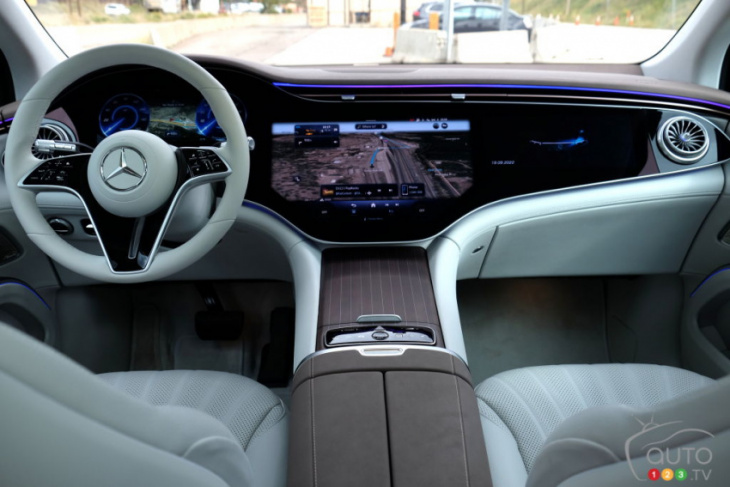 Hyperactivate
Bring anyone at all into the new EQS SUV, and chances are you’ll be talking first about the Hyperscreen. It can almost make you feel like you’re sitting just a little too close to your mega-inch TV screen in your cramped basement. Almost, but not, because frankly it’s a pleasure to use the system and enjoy its high resolution and great graphics, at least it is once you figure it all out. There’s a LOT here to absorb, so don’t stress if as a new owner you feel a little lost.

Lost or not, this series of connected curved screens spans basically the entire width of the interior, and I defy anyone not to be impressed by the show on display. The data screen is large, the centre screen is even larger, but most unique is the 12.3-inch OLED display for the front passenger, which delivers a ton of functionality and independence for the user sitting there. 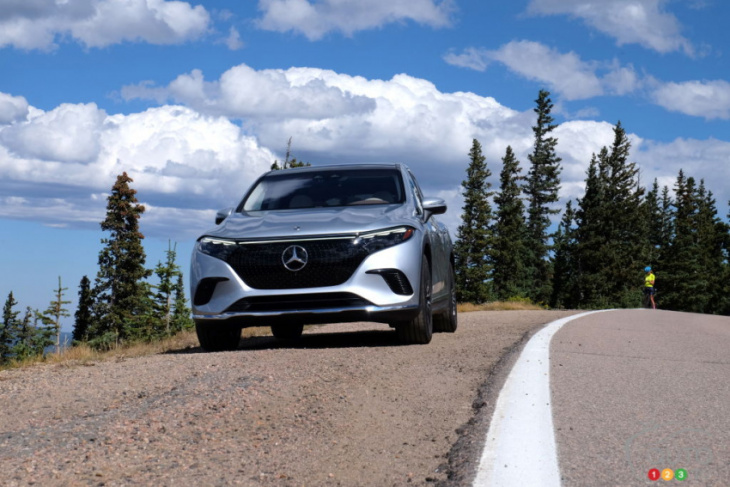 On the road
So, you’re resting your butt and back on the premium seat and your head on the soft cushion. Your ears are bathed in the sublime acoustics of the Dolby Almos audio system and quiet cabin of this ICE-free vehicle. Your eyes are feasting on the fantastic graphics spanning a mile-long stretch of dashboard in front of you. But eventually, you’re going to set the 2023 EQS SUV in motion. How does it do then?

Well if you were expecting a mediocre ride I don’t know what you were thinking. The 580 4MATIC that we drove first delivers an output of 536 hp and 633 lb-ft of torque (available immediately, of course); with that kind of kick, this thing can move, and it does, with a lightness that is pretty un-SUV-like. Even the 450 4MATIC is pretty quick on its feet, though it is a bit more relaxed about getting up to speed.

Otherwise, body roll from this roughly-GLS-sized SUV is, if not absent, not much an issue when cornering at higher speeds. Unless you get far more aggressive than you are ever likely to get with such a costly piece of machinery. 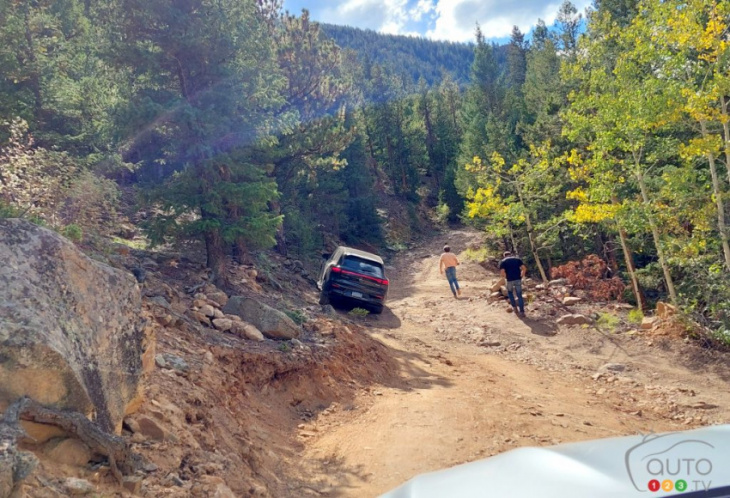 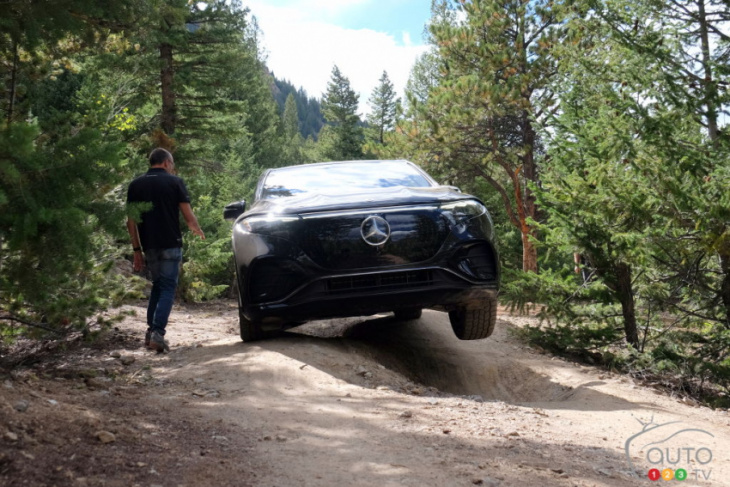 Hit the dirt
Which brings me, of a sort, to the off-roading part of our adventure in the Rockies. Even the Mercedes guides who helped us through our short but entertaining course admitted no owner is likely to punish their EQS SUV in this fashion. But hey, who were we to refuse the offer of abusing the EV as we direct it over obstacles, though troughs and around trees? Or even, the chance to balance a $160,000 luxury EV on two wheels on a moguls run? At the least, it allowed us to appreciate the bite and precision of the braking system and, once again, the incredible impact of the rear-wheel steering capability.

Back on the road, we took note of several qualities that will be highly appreciated by owners of the EQS SUV in more common contexts. For instance, the quiet ride and the effectiveness of the vehicle's air suspension system. Also the quick response of the climate control system, the clarity and detail of the nav system image, even the vehicle’s head-up system, which obligingly makes its 3D data appear “farther out” ahead of the driver than most other systems, so there’s less taking one’s eyes off the road. A nice optical trick, that.

The rear seats are just as sumptuous as those in front, with leg-, shoulder- and head-room all more generous than in the sedan, no surprise there. The cargo area is reasonable in size at 645 litres for the five-seat configuration and 565 litres with seven seats, but one thing I noted was the relatively constricted opening with the hatch opening. 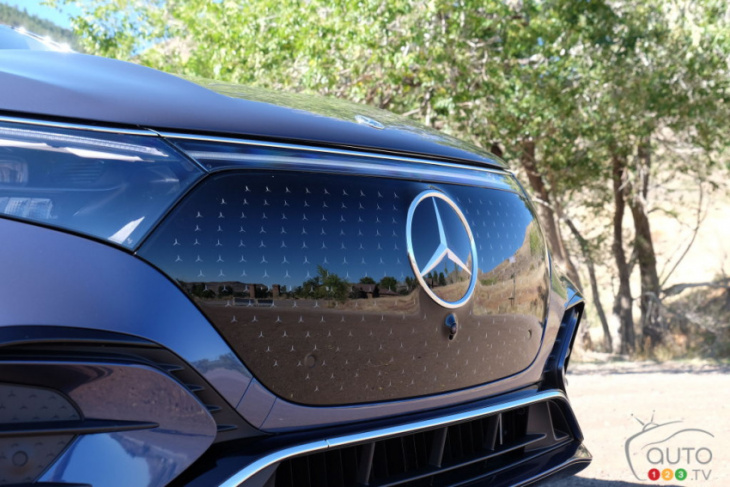 The last word
Our drives through different corners of the Rockies outside of Denver confirmed to us that Mercedes-Benz has spared no effort on this third EV to sit on its new electric-only architecture. And that’s only right, since this new SUV will carry the flag for it as it embraces electrification going forward.

From the outside, it’s not the most exciting-looking new SUV to launch in recent times – I find the exterior design tasteful and well-proportioned but a bit anonymous – but the real fireworks are inside, and within the cutting-edge powertrain.

The 2023 Mercedes-Benz EQS SUV is expected to arrive at Canadian dealers in the coming weeks.

Wonderfully refined, quiet ridePlenty of punch from the powertrainRange is more than acceptable (we’ll see in winter, mind you)Hyperscreen is something to behold
Rear-wheel steering helps make it as agile as a compact car in tight turns