The Lexus RX looks more aggressive and aims to handle better with parts from TRD.

Toyota Racing Development, known as TRD, has announced a series of upgrades and visual modifications known as F Sport parts for the new 2023 Lexus RX SUV, with a focus on improving handling and visual aggression.

The Lexus RX, in its flagship RX500h Performance variant, is already a fairly handy thing, with a 2.4-litre turbocharged petrol engine paired with two electric motors for a total 273kW and 551Nm output.

TRD’s aim, it seems, it not only to give the RX a bit more bark to match its bite, but also help it make the most of its power and torque with suspension modifications.

Under the bodywork, a steel front ‘performance damper’, or sway bar, and a similar addition to the rear aim to reduce noise and vibration while steadying the RX through high-speed cornering.

Sports mufflers and a rear diffuser are also part of the kit, while options of 20- and 21-inch forged aluminium wheels set the RX off with a little bit more individual style. 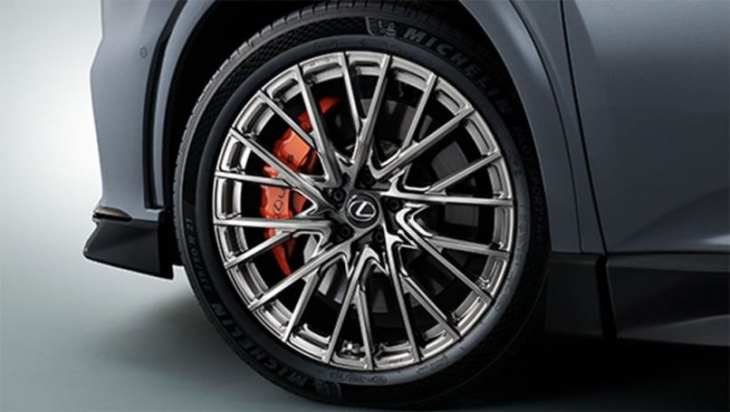 Similarly, the front spoiler lip and side skirts, as well as a roof mounted spoiler and ‘aerodynamic’ side mirror covers top off the TRD F Sport parts list.

Unfortunately for most of the world, the upgrades are only available in Japan, with pricing in Yen.

In Australia, the Lexus RX kicks off from a starting price of $87,500 before on-road costs for the RX350h Luxury 2WD, topping out at $126,000 for the aforementioned RX500h Performance.

It arrives in local dealerships in the first quarter of 2023.