Kia dropped the PHEV’s entry-level SX trim from the lineup. 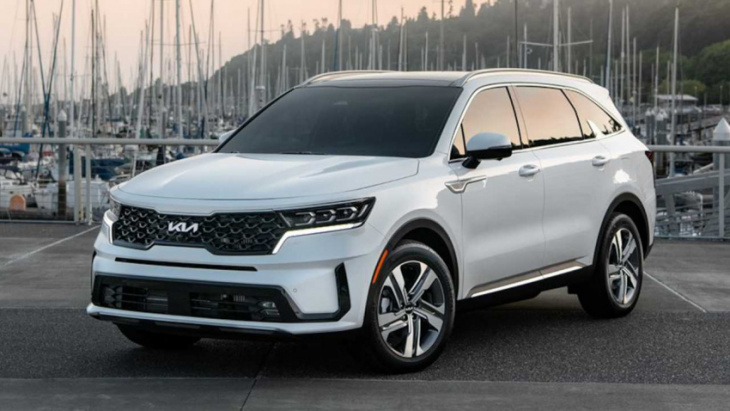 When the 2023 Kia Sorento Plug-In Hybrid goes on sale, it’ll be, like many things nowadays, more expensive than before. The new price coincides with the automaker revamping the trim lineup to eliminate the PHEV’s SX, leaving just the SX-P (Prestige). It will start at $51,185.

It has ventilated and heated front seats, a powered tailgate, a Bose 12-speaker premium audio system, a panoramic sunroof, and a 10.25-inch touchscreen infotainment display.

The Kia gets its power from a turbocharged 1.6-liter four-cylinder engine that makes a combined output of 261 horsepower (195 kilowatts) and 258 pound-feet (350 Newton-meters) of torque. Kia pairs it with a six-speed automatic transmission. The electrified powertrain allows the Kia to travel up to 32 miles on a single charge, requiring 3.5 hours to recharge with a Level-2 charger.

The fourth-generation Kia Sorento arrived new for 2021, and the automaker is already readying the crossover’s mid-cycle refresh. Camouflage and cladding hide the revamped model’s revised design, but the powertrains underneath the new sheet metal shouldn’t change that much. We expect the hybrid and plug-in hybrid variants to continue. The revamped Sorento isn’t expected to arrive until the 2024 model year, and we might see prices increase again.