It loads the interior with extra equipment and adds black elements to the body. 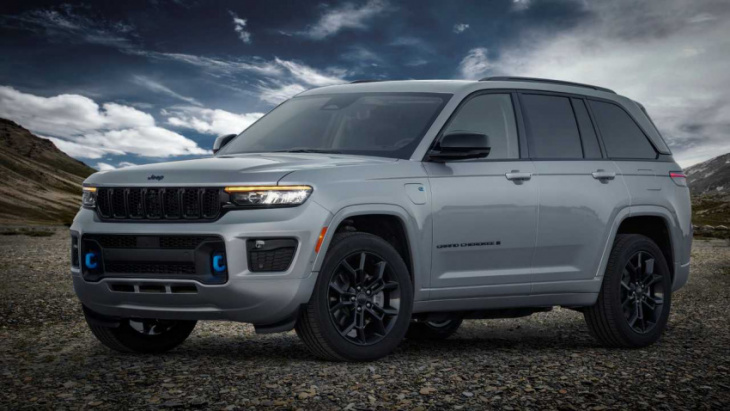 The Jeep Grand Cherokee celebrates three decades of combining a premium cabin and off-road ability. To mark the occasion, the brand launches the Grand Cherokee 4xe 30th Anniversary. You can see the special edition posing with the original in the gallery below.

The 30th Anniversary edition outfits the Grand Cherokee 4xe with black exterior trim, including on the grille and lower fascia. It rides on black 20-inch wheels with a Y-shaped spoke design. The tow hooks are blue. Other exterior elements include a dual-pane sunroof, body-color rear fascia, and badges identifying this vehicle as the special model.

Inside, this special edition has black Capri leather seats. Other amenities include ventilation for the front chairs, a wireless charging pad, a nine-speaker Alpine stereo, a 10.1-inch infotainment screen with navigation, and wireless support for Apple CarPlay and Android Auto. Front and rear park asssist, rain-sensing windshield wipers, a digital rearview mirror, and a 360-degree camera system are among the safety features.

Other than these tweaks, this special edition is like any other Grand Cherokee 4xe. The electrically assisted 2.0-liter turbocharged four-cylinder makes a total of 375 horsepower (280 kilowatts) and 470 pound-feet (637 Newton-meters). The 17-kilowatt-hour battery provides an estimated 25 miles (40 kilometers) of electric driving range. The vehicle can tow 6,000 pounds (2,720 kilograms).

To provide off-road ability, the Grand Cherokee 4xe has the Quadra Trac II 4×4 system with a two-speed transfer case. It has a 47.4:1 crawl ratio. In Trailhawk form, the vehicle has the Quadra-Drive II 4×4 tech with a limited-slip differential at the rear, Selec-Terrain traction control, and 10.9 inches of ground clearance.

The 30th Anniversary edition will add $4,700 to the price of the Grand Cherokee 4xe. Jeep will begin taking orders later this year, and deliveries will start in early 2023.

The Grand Cherokee debuted at the North American International Auto Show in Detroit in 1992 and was first on sale for the 1993 model year. Since then, Jeep has sold more than seven million of them.


View more: What Is a Jeep Wrangler Unlimited?

Prototype Jeep Is The Hellcat You Really Wanted