Priced at $4,700, the 30th Anniversary package bringing styling tweaks and more features will be available for a limited time only. 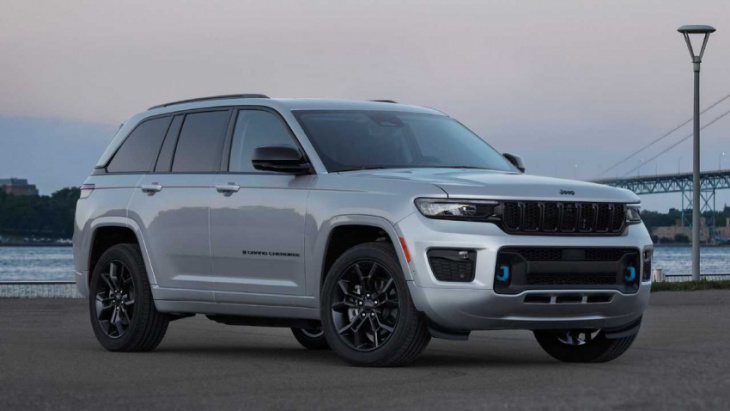 Called the 2023 Jeep Grand Cherokee 4xe 30th Anniversary edition, the new model has its world debut today at the Detroit Auto Show at Huntington Place hosted by the NAIAS.

The anniversary model is based on the most technologically advanced and 4×4-capable Jeep Grand Cherokee yet, the 4xe plug-in hybrid. The electrified SUV delivers 25 miles (40 kilometers) of all-electric range and 56 miles per gallon equivalent (MPGe) from a hybrid system that delivers 375 hp and 470 pound-feet (636 Newton-meters) of torque and max towing of 6,000 pounds (2,721 kilograms).

“When the original Jeep Grand Cherokee debuted in 1992 by famously crashing through the glass at Cobo Hall, it literally shattered expectations and redefined what a premium SUV could be. Three decades later and more than 7 million Grand Cherokees sold, the most awarded SUV ever is still forging new ground with the electrified plug-in-hybrid 4xe model.

The Grand Cherokee 4xe 30th Anniversary edition underscores how far the Grand Cherokee has come and is yet another example of the Jeep brand’s goal to be the electrification leader in SUVs.”

The 2023 Jeep Grand Cherokee 4xe 30th Anniversary edition will be available for a limited time with a U.S. manufacturer’s suggested retail price (MSRP) of $4,700 for the package. Orders open later this year, with deliveries to follow in early 2023.


View more: Is the Jeep Cherokee 4XE or the Toyota Sequoia the Better $60K Hybrid SUV?

It’s official: Jeep is yanking the 3.0-liter EcoDiesel V6 from the Wrangler lineup, celebrating the loss with the 2023 Wrangler Rubicon FarOut Edition. A thread at the JL Wrangler Forums got hold of an e-mail to dealers that broke the news a few days before Stellantis got to it, ...


View more: The Best Used Jeep Cherokee SUV Years: Models to Hunt for and 1 to Avoid

Can You Still Buy a Jeep Grand Cherokee Trailhawk package?