Available in two colors, with different color handguards depending on which color you choose. 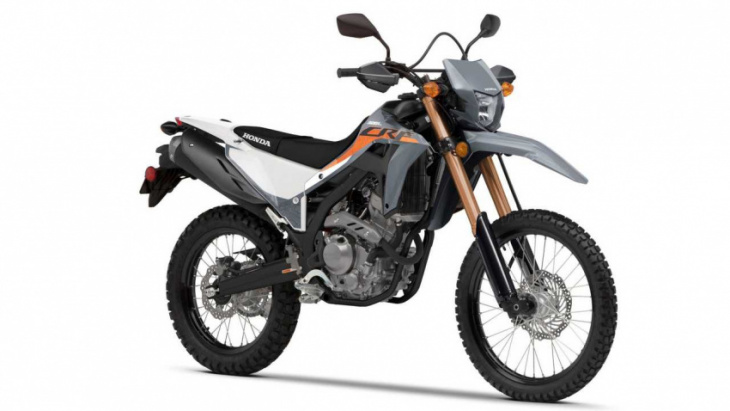 On December 1, 2022, Honda Motor Europe rolled out the 2023 CRF300L. What’s new? Knuckle guards now come fitted as standard, with the color of those guards varying based on which color of CRF300L you choose. Additionally, the reliable, small-displacement dual-sport machine gets a new color and graphics for 2023.

The new Swift Gray color scheme on the 2023 CRF300L comes with a pair of black knuckle guards, which echo the color, shape, and size of the stock mirrors on this bike. The primary color is gray, though there are orange and white accents, as well as a black CRF decal on the side of the bike. The seat is black, with the Honda name logo picked out in white along the rear corner.

Go for Honda’s Extreme Red color instead on your 2023 CRF300L, and you’ll get matching red knuckle guards instead of black ones. The saddle is also red, and there are white and blue accents to break up the red that’s the primary color of this bike. The Honda logo on the seat is white this time instead of black.

For 2023, the CRF300L’s 286cc, liquid-cooled, dual overhead cam, single-cylinder engine that produces a claimed 20.1 kilowatts (or 27 horsepower) at 8,500 rpm and 26.6 newton-meters (or 19.6 pound-feet) of torque at 6,500 rpm remains unchanged. Bore and stroke are still 76 x 63mm, and compression ratio remains 10.7 to one. This mill is mated to a six-speed gearbox, which also remains unchanged for the new model year. An assist and slipper clutch comes standard.

The CRF300L gets a 21-inch front wheel and an 18-inch rear wheel. The front fork is a 43mm Showa inverted unit, and a Showa shock absorber and Pro-Link rear suspension adorn the rear. Braking is accomplished with a single 256mm disc up front, along with a two-piston brake caliper. In the rear, the 2023 CRF300L gets a 220mm disc and a single-piston caliper. Dual-channel ABS is standard.

Pricing and availability will vary by market within Europe. So far, Honda has only announced the 2023 CRF300L’s details for the European market, but in the case of Honda, that usually means it’s the first announcement, not the only announcement. As and when we have more information regarding additional releases in other markets, we’ll be sure to keep you updated.