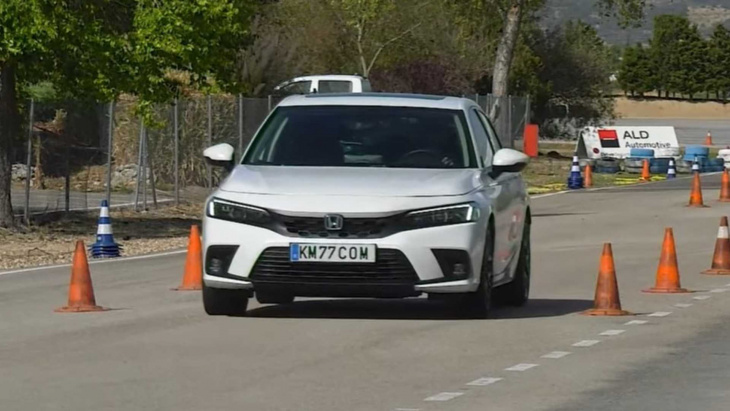 You don’t have to buy the Type R to have a Civic with good handling.

The 2023 Honda Civic in non-Type R form may not be the most engaging new vehicle to drive but it is surely not unstable or unpleasant behind the wheel by any means. In fact, it turns out even the regular Civic e:HEV has a pretty decent road behavior as a recent moose test by the folks over at km77.com shows.

It’s important to note that the vehicle you’ll see being evaluated in the video above is for the European market but there aren’t any major differences between the Euro-spec model and the one for the United States. It’s also worth pointing out that this car is equipped with 18-inch wheels, fitted with 235/45 Michelin Pilot Sport 4 performance tires.

Probably the biggest difference between this European model and the US Civic comes under the hood. The white liftback has a 2.0-liter Atkinson-cycle gasoline engine supported by two electric motors and a small lithium-ion battery package. The Japanese automaker claims this setup has 41 percent thermal efficiency but that’s not the most important thing in this test. Finally, let’s talk about the results of the moose test.

The short version of the story is that the 2023 Civic passes the evaluation between the cones with flying colors. The highest achieved speed is 48 miles per hour (77 kilometers per hour) and it is more than what the majority of models manage in the test. At a higher speed, the car remains stable and controllable but the driver is not able to go through the curve without hitting any cones.

The test pilot also points out the car feels exactly as heavy as it actually is. And in this configuration, the Civic e:HEV weighs 3,344 pounds (1,517 kilograms), but the steering remains very precise under heavy load. Combined with the excellent grip provided by the tires, the tested vehicle is also very fast in the slalom test. For detailed results – watch the video at the top of this page.