The high-revving supercar will be sold in numerous markets around the world. 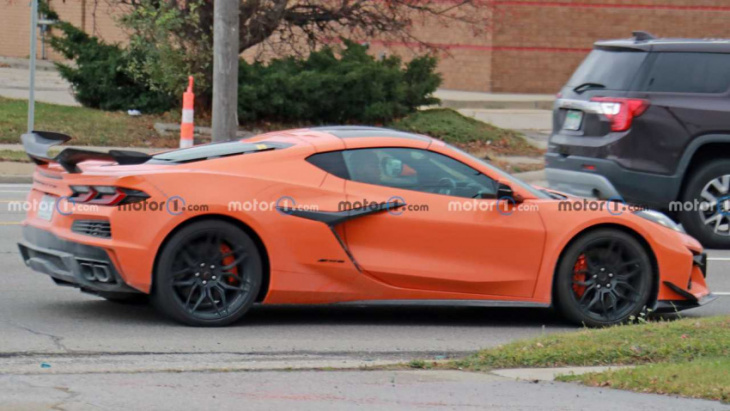 Strictly speaking, these aren’t traditional spy photos. This isn’t a secret prototype with camouflage removed. However, it is rare and for Chevrolet Corvette enthusiasts outside of North America, it’s significant. That’s because this is the hot Z06 you’re likely to get.

Just as the case was with the C8 Corvette Stingray, Chevrolet will offer a right-hand-drive version of the 2023 Corvette Z06 for markets where folks drive on the left side of the road. This particular Z06 was spotted in Michigan wearing a manufacturer license plate and equipped with the Z07 package. It’s impossible to miss the big rear wing, but the small winglets at the front are rather subtle. The big brakes also look like carbon ceramics, further confirming this is a Z06 in its hottest trim.

Aside from the steering wheel being on the wrong right side of the car, another interesting feature of global-market Z06 models is the exhaust. In the States, the high-revving 5.5-liter V8 sings through four megaphone tips lined up neatly in the center of the rear fascia. Elsewhere, the finishers are at the corners in the same format as the C8 Stingray. This won’t be the case for every Z06 sold around the world; Chevrolet has stated the side-exit exhaust leaves room for a particulate filter. In areas with stricter emissions regulations, this is the car you’ll see.

It means less visual punch, but the DOHC LT6 V8 under the engine cover still packs a wallop. It develops 670 horsepower (500 kilowatts) at a lofty 8,400 rpm. That’s just 200 revs shy of the 8,600-rpm redline, making the C8 Z06 unlike any other production Corvette in the car’s long history. It’s also the most powerful naturally aspirated V8 engine ever offered in any production car, and under optimal conditions, it sends the Z06 to 60 mph in 2.6 seconds.

2023 Corvette Z06 deliveries are already underway in the United States. Other markets should see the supercar soon.

Why yes, we would like this new Chevrolet Corvette GT3.R racer

Somebody wanted this 2023 Corvette Z06 bad enough to pay a substantial premium, and it isn’t even fully loaded. It’s no secret that the 2023 Corvette Z06 is the one of the most coveted new vehicles on the planet at the moment, one that’s facing extreme demand with little ...

Judging by the early response to the Corvette E-Ray, it seems as if many folks are pretty excited about the electrified sports car. Revealed a long time ago, the recently-launched 2023 Corvette Z06 is still one of the hottest entities on the new vehicle market, thanks to high demand ...


View more: Camping at MacMulkin Chevrolet to Get on the E-Ray Reservation List!

C8 Corvette production is a fascinating, complicated process that involves countless moving parts – no pun intended. The eighth generation Corvette was a massive success from the day it debuted, and has remained in low supply and high demand since the mid-engine machine launched for the 2020 model year. ...

Two titans went head to head at Barrett Jackson with custom Corvettes. Dave Kindig vs Jeff Hayes. Which one do you think sold for more? Which one would you rather buy, and why? Cruisin’ through CorvetteForum today, I happened upon a terrific thread titled, you guessed it, Dave Kindig ...


View more: Dave Kindig vs Jeff Hayes: Who Made a Better Custom Corvette?

Harry is 80-years-old and owns a C7 Corvette. It’s his only car. It’s also his only truck. So he uses it for hauling, camping, and hunting. Harry is our new favorite Corvette owner. #GOAT As most Corvette fans are well aware by now, General Motors plans on expanding its ...


View more: Who Needs a Truck When You Can Daily Drive a C7 Corvette Like Harry!

MacMulkin Chevrolet became a makeshift campground ahead of the start of the E-Ray ordering process.

General Motors is investing in the lithium producer Lithium Americas, thus securing access to the Thacker Pass mine in Nevada, the largest known source of lithium in the USA and the third largest in the world. In addition, GM has secured its supply for another component for its electric ...

2023 Chevrolet Malibu Colors: Which Malibu Hue Is the Best Pick for You?

Chevrolet Blazer Insurance Costs: Everything You Need to Know if You Have Bad Credit