BMW's big high-performance SUV is built alongside the X5, X6, and X7 in South Carolina. 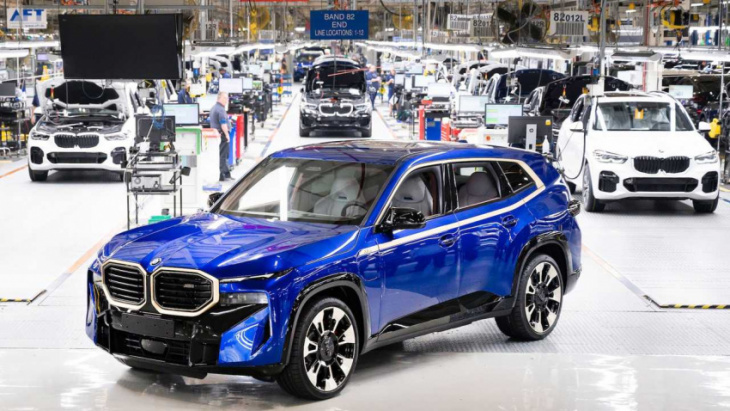 “We are excited to add the first-ever BMW XM to our plant’s portfolio,” said President and CEO of BMW Manufacturing, Dr. Robert Engelhorn. “The modern, future-oriented design and powerful performance of the BMW XM has generated a lot of enthusiasm. As the center of competence for X models, BMW Plant Spartanburg is prepared to build this vehicle with the highest premium quality that our customers deserve.”

The XM debuted in September to no small amount of fanfare. It’s the first M-specific vehicle since the iconic BMW M1, but with 644 horsepower and a mass of over three tons, it’s no M1 successor. It’s the heaviest production Bimmer ever offered, and it’s also the first to feature an electrified powertrain from BMW M. And then there’s the exterior design, which is as polarizing as it is unique. Any way you slice it, the XM stands out.

In case you missed the debut, the 2023 XM combines a twin-turbocharged 4.4-liter V8 engine with an electric motor built into the eight-speed automatic transmission. The engine generates 483 hp on its own, with the electric motor adding another 194 ponies. With everything synced up, we get the combined 644-hp rating and it’s enough to send the XM to 60 mph in 4.1 seconds. If that’s not enough for you, BMW will offer a Label Red edition with 738 hp but it doesn’t arrive until the fall of 2023.

BMW’s Spartanburg facility is also home to BMW X5, X6, and X7 SUV production. It’s a very active location, clocking 257,876 total exports from the plant in 2021 alone. BMW doesn’t offer any estimated production figures for the XM, but with a starting price of $159,995, it’s safe to assume volumes will be lower.

Looking for more on the BMW XM? Check out the Rambling About Cars podcast, available below.