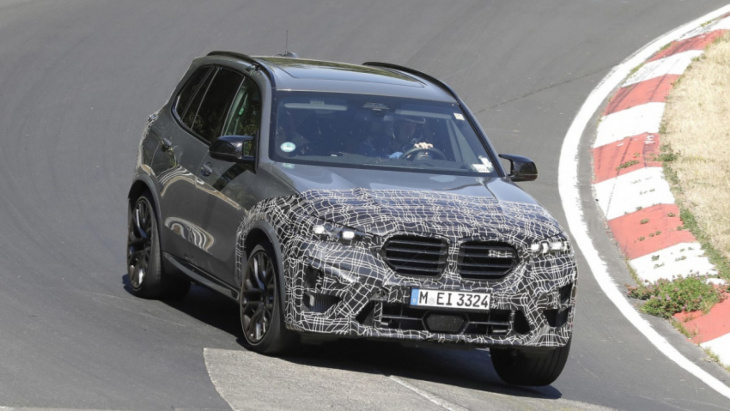 BMW has been spotted putting an updated version of its BMW X5 M Competition through final sign-off testing at the Nürburgring, leading up to its reveal either late this year or early next. The new M model will correspond with a wider range update for X5, but will pick up a selection of new design motifs specific to the M Competition, plus a few updates under the skin.

Its aesthetic changes will focus around a new look front and rear. It’s clear from these images that the new X5 will pick up a slimmer set of LED headlights and a reshaped grille, but specific to the M are new horizontal slats within the kidneys that will also be found on the upcoming M2 and flagship XM SUV.

Underneath, the new lower bumper will be reshaped, but otherwise retain a key function of supplying copious amounts of air to the twin-turbo V8, but we expect it to have an even more aggressive design in-line with BMW M’s new and more eclectic design language. 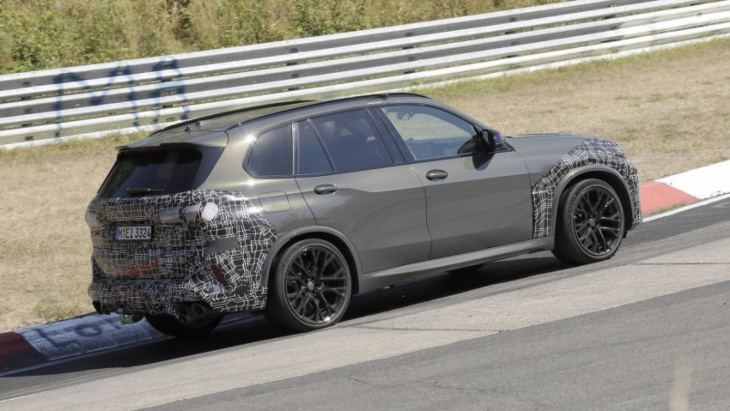 Out back, the changes are likely to be more subtle, with new lights and some reshaping to the bumper and tailgate, but the key M elements like its four drainpipe exhaust finishers and double-profile roof spoiler will remain. Inside, we expect the X7’s new interior to be essentially carried over wholesale, incorporating BMW’s curved dual-screen display, sat on a new dash that’s both slimmer and more ornate in its detailing.

We can’t yet say whether the X5 M will offer any more power than the existing car, but with 616bhp already available from the twin-turbocharged V8 engine, we’d be surprised if it did. From our experience, it certainly doesn’t need the extra power, as the X5 M is already one of the more extreme high performance SUVs, both in terms of performance and handling. 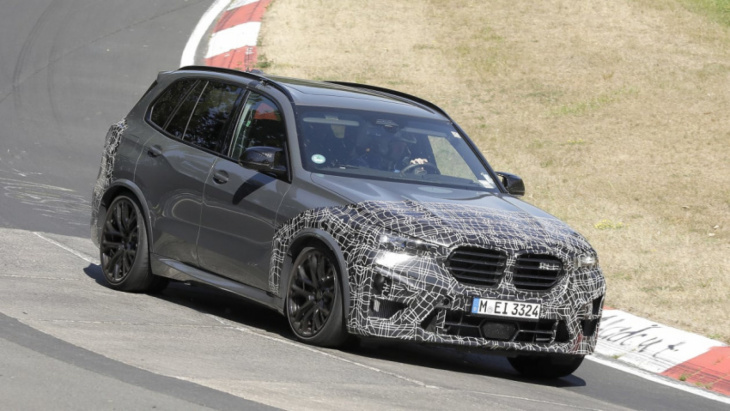 And to that end, we expect that like BMW’s done with its updated X3 M Competition, the X5 M Competition will be adjusted in its setup, rather than given a wholesale change. Unlike all of its rivals, it features technical elements like simpler coil-spring suspension and an electronically-controlled limited slip differential matched to an extreme rear-bias to the all-wheel drive system that genuinely makes it feel less like an aggressively set up SUV and more like a big saloon. But it’s how these elements are calibrated that make all the difference on the road.

We have a complex opinion of the current car. On the one hand, it’s sheer power, aggressive chassis tune and hilariously lairy handling balance make it one of the more enjoyable SUVs to pilot. Yet in order to achieve that capability, things like the basic ride quality have been completely compromised, making it more of a struggle to drive day-to-day than you’d ever expect of something with an X5 badge.

With BMW M’s current form, and the extent to which BMW is refining the new X5 M’s handling package for what would otherwise be a mild mid-life update, it’ll be interesting to see what it has in store.

Rolling with the ROCBy: Juandre It’s all-things Porsche as Ryan O’Connor chats with South African rally driver Jon Williams. From a local motoring career to representing the Stuttgart automaker in the dunes, the pair discuss the latest Porsche 911 Dakar model and its antecedent; the revered Dakar Rally-Winning 959 ...

Porsche is said to begin production of the Macan EV sometime in 2024. Porsche has been working on introducing the Macan EV for quite some time now. Spy images of the Porsche Macan EV undergoing testing have been released on multiple occasions. However, the latest spy shots of the ...

Dempsey Hill, Singapore – Visitors of The Pantry at Dempsey Hill will be treated to a splash of colour as Porsche Singapore’s pop-up event takes over the space. Dare Forward: A Porsche Macan Experience, is an open event that will be happening from the 17th to 21st of November ...

Retro Only ten were believed to have been built, and this gorgeous Bimmer is one of them The BMW M1 story need not be repeated here because you already know it, suffice to say: BMW M wanted to go racing, built one of the finest cars in its history, missed ...

It's similar to the current Macan's greenhouse, with some notable exceptions.

This classic Porsche 911 has been covered in coral for art

Porsche Has A New CEO For Great Britain