BMW’s third-gen entry-level crossover is bigger, more powerful, and stylish, and sports a new interior that does away with a lot of fussiness. 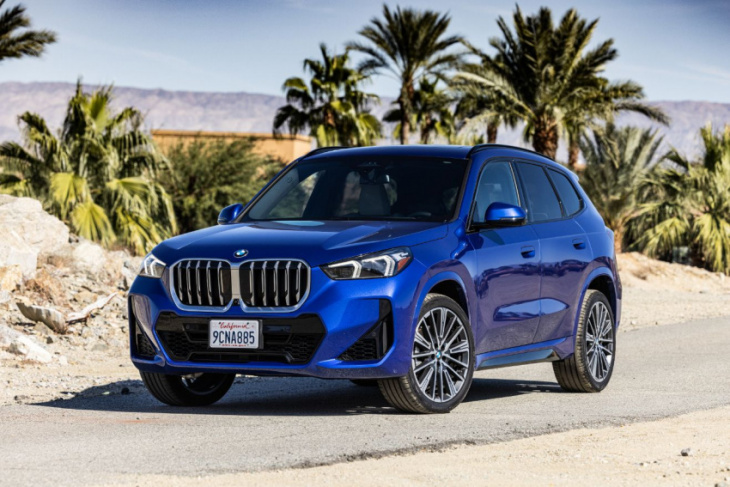 While BMW launches refreshed versions of its X7 SUV and 3-Series sedan, along with the all-new 7-Series flagship that includes the first all-electric i7, it might be easy to overlook the practical, more affordable X1 compact crossover, which is all-new as a 2023 model and launching now.

But this third-generation X1, which BMW describes as a compact sports activity vehicle, warrants attention for its accessibility, its familial design, its interior appointments, and its overall performance.

Battery-electric vehicles seem to have most of Munich’s attention these days, so it’s encouraging to see an all-new vehicle with a gasoline-fueled combustion engine. 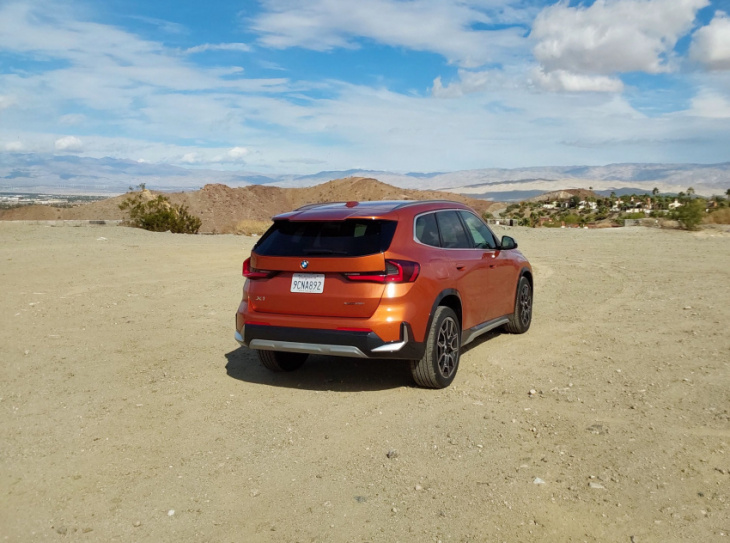 The outstanding B46 2.0-liter turbocharged four-cylinder that powers most of BMW’s smaller models gets some meaningful upgrades, including the Miller combustion cycle for greater efficiency and revised geometry for the combustion chambers.

Plus, the new X1’s four-pot will have eight fuel injectors (direct and multi-port for each cylinder), a belt-and-suspenders approach pioneered by Toyota and Lexus some 20 years ago.

The overall result is a substantial increase in output, to 241 hp (from 228 hp on the outgoing X1) and 295 lb-ft of torque (up from 258 lb-ft), available starting at a mere 1500 rpm. The powertrain upgrades make the new, athletic X1 spirited and fun to drive, while delivering a reasonably spacious second row and cargo hold.

The EPA fuel-economy ratings improve from 27 mpg combined on the previous model to 28 mpg on the 2023 X1. 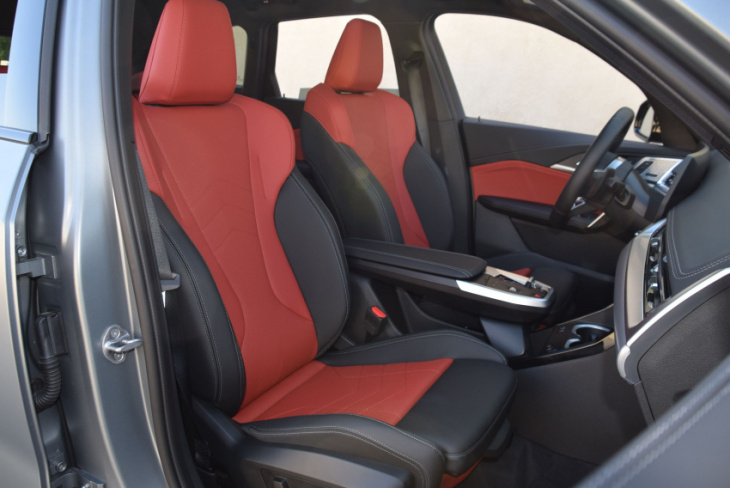 With 121 hp per liter, BMW says the new X1 can sprint to 60 mph in 6.2 seconds and reach a top speed of 149 mph with performance tires, representing slight improvements in both metrics compared to the previous X1.

All versions of the new X1 get xDrive AWD, supported by a quick, responsive 7-speed DCT, which replaces the eight-speed automatic that powered the previous model’s rear wheels or all four. The rear-drive offering goes away now with the ’23 model.

The re-engineered X1 weighs in at 3750 pounds, 53 pounds heavier than the predecessor, reflecting the new dimensions: nearly 2 inches longer and taller and nearly an inch wider. It looks more upright and more substantial.

Yes, the signature twin kidneys up front look a bit too large, but they at least appear to be correctly proportioned relative to the headlamps (which can’t be said of the new 7-Series) and the rest of the front end. There must be significant underhood cooling benefits—rather than aesthetic purposes—to BMW’s oversized kidneys. 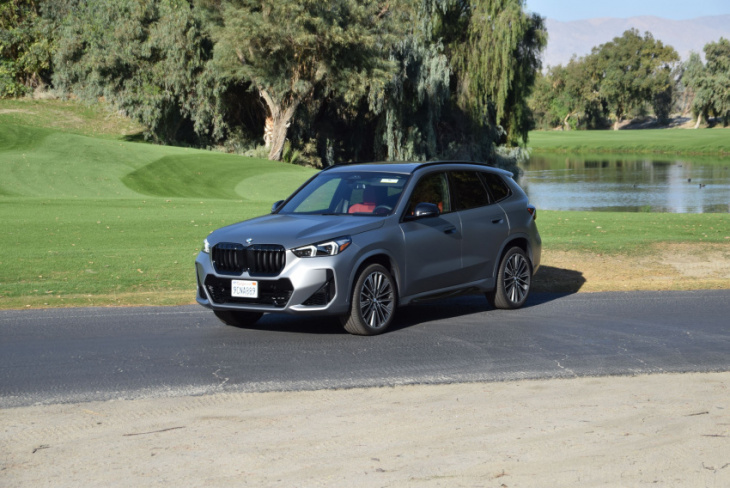 We test drove two 2023 X1 xDrive28i models—one painted Utah Orange, the other Frozen Pure Grey—carrying a mainstream-leaning base price of $38,600, so it’s best to approach this entry-level ute understanding that 7-Series levels of comfort, materials, and features will be missing.

Although functional, the previous X1 had a lot of old-school hard buttons for climate and radio presets dominating the prime real estate of the center stack, to the right of the steering wheel. And the instrument cluster was conventional, with gauges protected by a dome-shaped brow—all very familiar cockpit design. 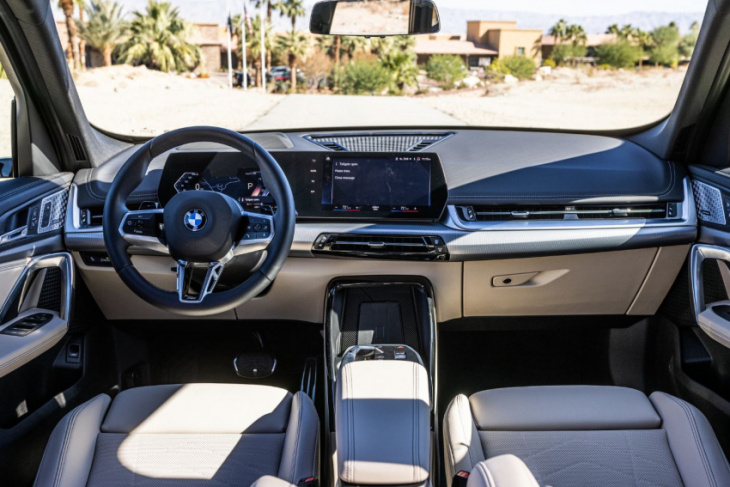 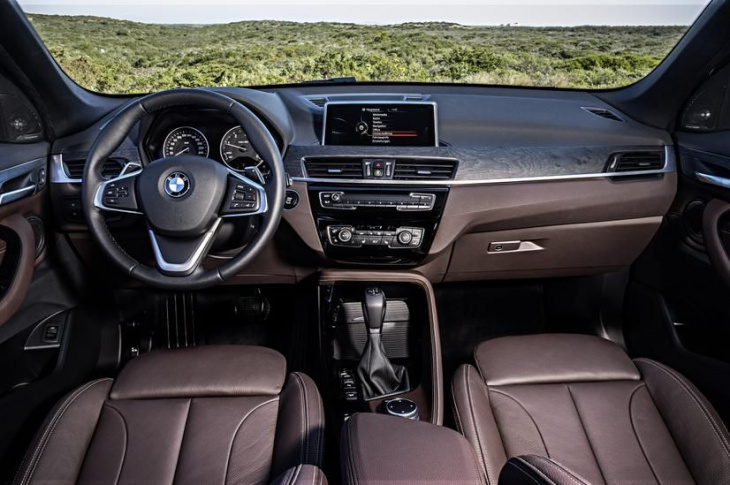 But all bets are off now as automakers purge most of the hard buttons and in some cases combine a reconfigurable digital instrument cluster with the primary upper screen above the center stack.

That’s exactly what BMW did with the new X1, and the result is a much cleaner aesthetic as the two screens now reside behind one sheet of glass—a configuration pioneered by the 2014 Mercedes S-Class.

Certain traditionalists take issue with this layout because an instrument cluster without a brow can be exposed to too much glare. But Tesla’s wildly popular Models 3 and Y have no brow (or even an instrument cluster in front of the driver), and most other new EVs have followed this trendline.

Other big changes are found in the center console of the new X1, where the conventional protruding gear shifter and BMW’s polarizing iDrive controller on the previous model have disappeared, replaced by a simple lever for changing gears, a few buttons to select drive modes, and a volume roller positioned near the passenger’s left hand.

The lack of an iDrive joystick means the center screen will see a lot of finger taps, or voice activation can be used, too.

The protruding gear shifter and BMW’s polarizing iDrive controller have disappeared from the new X1.

Our two test models were handsomely appointed in perforated SensaTec imitation leather—one model in light mocha brown, the other in two-tone red and black. Each was equipped with a $4200 premium package that included heated steering wheel and front seats, surround-view camera, wireless phone charging, Parking Assistant Plus, and other goodies. 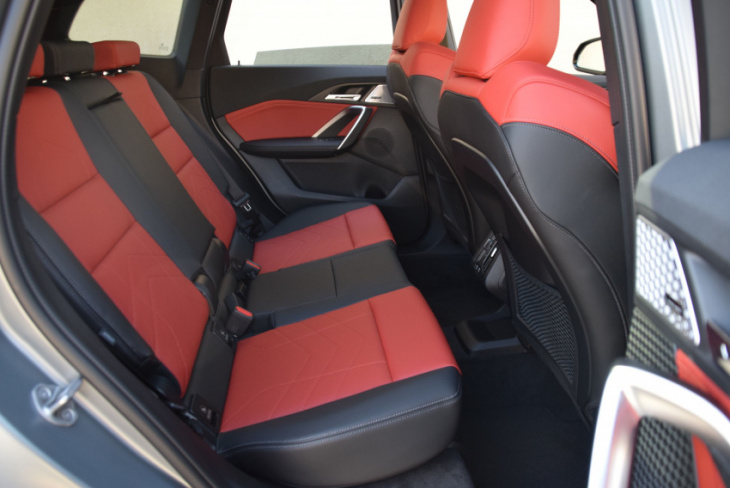 Without the M Sport package, the Utah Orange X1 stickered for $46,795.

BMW originally launched the X1 in 2009, then followed it in 2018 with the X2 (which was three inches smaller despite what the nomenclature would suggest). The X2 is currently out of production as the plant in Regensburg, Germany, (where X1 is built, too) retools for the next-generation X2. Stay tuned for word of its on-sale date. The new X2 will be similar in size to the 2023 X1.

The outgoing X1 finished 2021 with more than 18,000 deliveries in the US—good for a third-place finish behind the Audi Q3 and Volvo XC40. 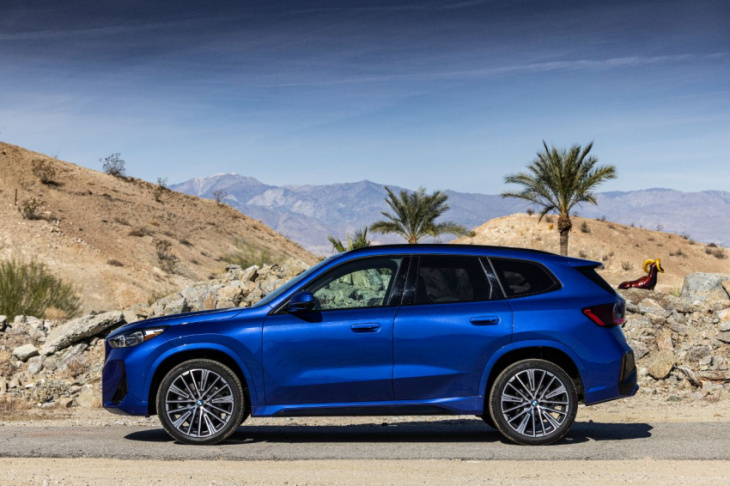 So far this year X1 tallies have trailed off severely during model changeover, and the outgoing model is at the bottom of the pack, behind the Q3, Lexus UX, Mercedes-Benz GLA, and XC40.

Munich has high hopes the fully redesigned X1 can fight for segment leadership.

There are many aspects to hydrogen that could play a role in the future of motoring.


View more: Here's Why BMW Still Hasn't Given Up On Hydrogen