At least at launch, the M2 seems to be coming with rear-wheel drive. 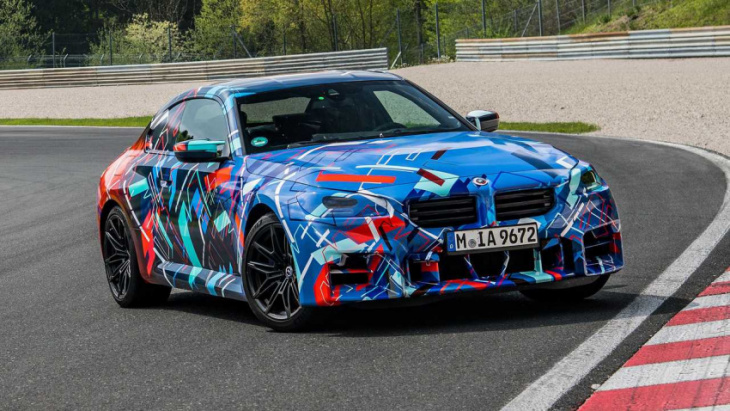 The new BMW M2 debuts in October, reportedly on the 11th. A member of the Bimmer Post forum did some digging and found an internal document showing the S58 twin-turbo 3.0-liter inline six makes 453 horsepower (338 kilowatts) in this application.

If this document is accurate, then it would mean the version of the S58 in the M2 is a bit less powerful than the application in the X3 M and X4 M. That variant of the mill has 473 hp (353 kW). While the listing doesn’t show the torque figure for the M2, the powerplant in the performance crossovers has 457 pound-feet (620 Newton-meters).

The internal listing doesn’t list the M2’s gearbox, but it says the drive as “Heck,” which is the German word for rear or tail. This would mean the model is rear-wheel drive.

A previously leaked technical document showed that an all-wheel-drive M2 was also happening eventually. The system allegedly has five driving modes. The torque distribution prioritizes sending the output to the rear wheels until additional traction is necessary.

Judging from the camouflaged prototype (above), the M2 has more inlets in the lower fascia and horizontal slats in the upper grille. The ride height is lower than a regular 2 Series, and the fender flares are more pronounced. Quad exhaust outlets are below the rear bumper.

If the regular M2 isn’t exciting enough for you, there’s a rumor about BMW developing a hotter version that might wear the CS or CSL moniker. It would reportedly push the engine’s output to 473 hp (353 kW). Only an eight-speed automatic gearbox turning the rear wheels would be available. In addition to the extra power, there would be tweaks to the suspension and brakes. We have no details yet about when this model might debut.

BMW M division boss Frank van Meel confirms that the new M2 is nearly the end of the line for purely combustion-powered offerings from the team. Although, the upcoming, limited-run 3.0 CSL seems to be the actual finale. We already know that the next-gen M5 adopts a plug-in hybrid powertrain.