2022 Polaris Slingshot SL Review: This 3-Wheeled Wonder Is Not for Everyone 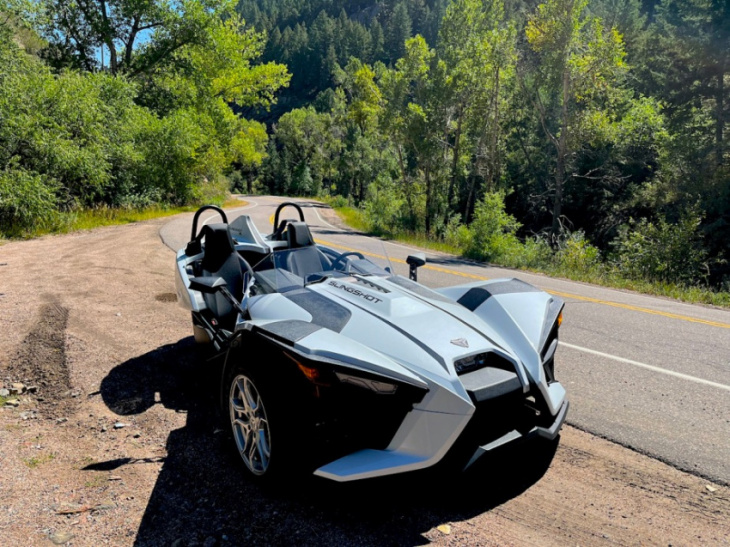 A front view of the Slingshot SL on a canyon road. | Joe Santos, MotorBiscuit

After spending some time in the 2022 Polaris Slingshot, it’s clear that it’s made for a certain type of buyer. If you’re the type that likes the wind in your hair, the sun beating down on your skin at all times, and the sound of a go-kart engine wailing through your full-face helmet, then the Slingshot could be for you. Or you could just buy a motorcycle.

However, if you’re like me and you like having doors, air conditioning, and a radio that you can listen to with the top down, then buy a convertible instead. That’s not to say that the Slingshot is a bad vehicle by any means; it’s not.

It’s fun to drive and has a unique sense of charm that fits its unorthodox three-wheeled architecture. And if you’re into that sort of thing, then this autocycle could be your next weekend warrior.

Polaris brought back the SLR trim level that features a 203-hp ProStar engine and a two-tone paint scheme. It also has a sport interior and a 7-inch touchscreen display. The Slingshot R now comes standard with a vented hood and Brembo brakes, both of which can also be added to the other models for an extra cost. Lastly, an Excursion Top, which is a removable soft top, joins the options list. I highly recommend it as my test car did not have one.

Which Polaris Slingshot trim level is right for you? 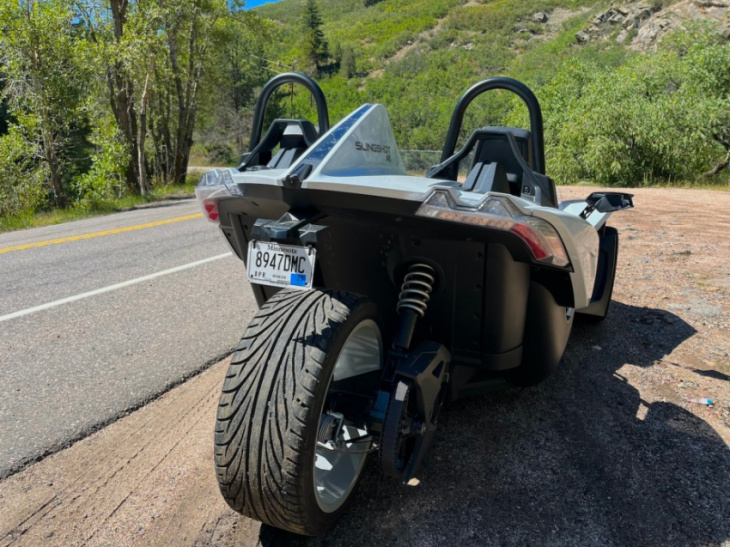 Choosing the right 2022 Slingshot trim level is easy as there are only five to choose from:

The base S and SL models each come with a 178-hp engine, while the upper trims come with a more-power 203-hp unit. More tech features like a premium audio system, onboard navigation, and Apple Carplay become unlocked the higher you move up the ranks.

My tester was a Slingshot SL model with a five-speed manual transmission. It also came with the 7-inch Ride Command touchscreen interface, a USB port, and a Rockford Fosgate premium audio system.

Have you ever gone to a go-kart track with your friends and had a friendly competition? Maybe the group of you had a couple of bets on who could get the fastest lap time and then laughed at those who spun out. A fun time was surely had, and afterward, you probably got into your normal car and drove home.

Well, the Polaris Slingshot is the vehicle you take when you want that competitive spirit every time you drive anywhere. The possible danger of spinning out is ever present if you get careless with the throttle. But unlike the go-kart track, there is no friendly competition, or friends, to keep your adrenaline rushing.

Instead, there are the thrashy sounds of the ProStar engine and whining transmission to keep your auditory senses occupied because the Rockford Fostgate sound system isn’t loud enough to hear. And instead of track workers flagging you in for the final lap, there are countless onlookers at every stoplight wondering what you’re driving and why.

Why would anyone drive a Slingshot? 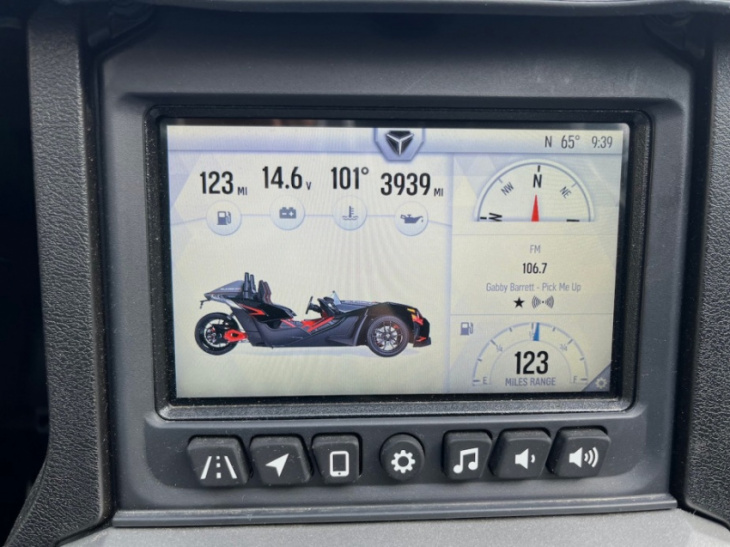 The 7-inch touchscreen in the Slingshot is responsive and informative. | Joe Santos, MotorBiscuit

I found that the only reason anyone would drive a Slingshot on a daily basis is that they want something a little more fun than a car but don’t want to buy a motorcycle. There are no airbags or doors present, and there’s barely a windshield. There are seatbelts, but there’s no roof, so be prepared to burn in the summer. A soft canopy top – the Polaris calls an Excursion Top – is available for an extra $1,800.

I highly recommend it. My tester didn’t have one, so I doused myself in sunscreen before every drive for some protection from the Denver sun.

Lack of safety aside, the Slingshot is fun to drive. My tester was equipped with an Aisin five-speed manual transmission with a shifter that feels almost exactly like a Miata’s, which is excellent. The 178-hp ProStar engine that sits underneath the long hood has an 8,500 rpm redline, which is fun to rev up to in every gear.

The power comes on quickly as the acceleration is snappy, and it builds in a linear fashion up to the red line. In my opinion, it doesn’t sound that great. It’s kind of trashy sounding like an older Chevy Cobalt engine.

Upon hard acceleration, I did get the rear wheel to step out a little. Also, the rear end did come loose a couple of times when coming in hot through a corner. So, although the weird third wheel is stable, traction is still its Achilles Heel under certain conditions.

Otherwise, driving the Slingshot is a point-and-shoot affair that doesn’t feel too much different than driving a convertible. Just more stripped down and louder. It’s also really quick, and I had no trouble getting up to the speed limit, even on the freeway. I did wish it had a little more power, so maybe the 203-hp engine is the way to go if you’re looking to buy one of these.

The Slingshot is somewhat comfortable and has barely any storage capacity 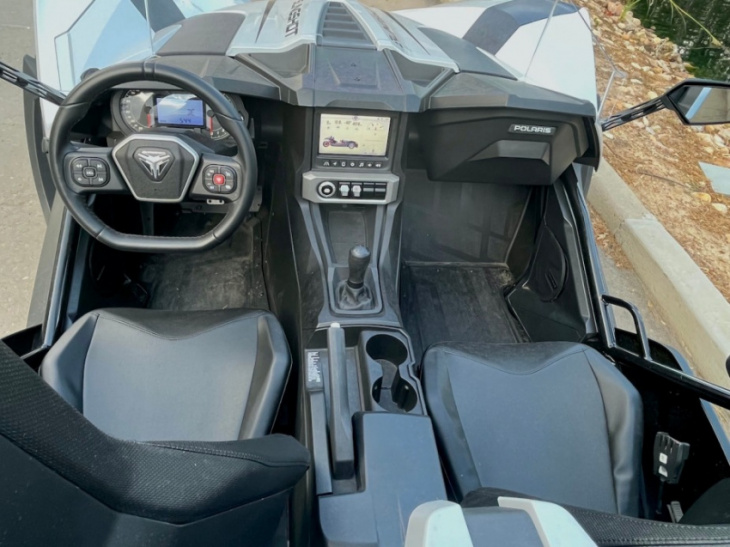 The cockpit of the Slingshot is sparse but mildly comfortable. | Joe Santos, MotorBiscuit

There are only two seats in the Polaris Slingshot, but they’re more comfortable than they look. No, there are no contours that hug your back and support you laterally, but the padding is thick enough to pass for a decent seat.

It’s comfortable enough for an hour’s drive or so, but after driving around for four hours straight, I’d lying if I said that my backside didn’t hurt afterward. I recommend short trips, if possible.

As far as storage, there are two lockable cubbies behind each seat that are large enough to fit a helmet and not much more. There are also two cupholders in the center console in addition to little storage spaces to put your phone or other small things. In terms of overall practicality, I would say that the Slingshot could work for the occasional grocery store run in a pinch. But don’t count on it for a weekend getaway.

There are two different engines to choose from 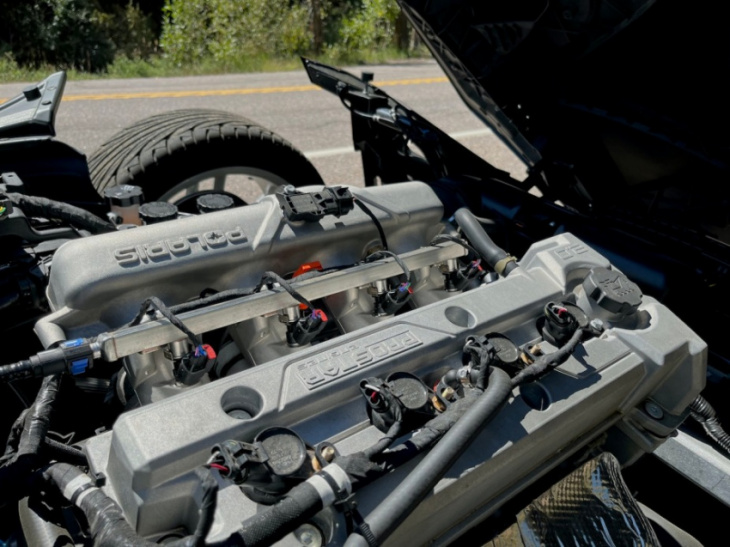 The 2.0-liter ProStar engine under the hood. | Joe Santos, MotorBiscuit

As stated before, there are two different engines that the Polaris Slingshot can be equipped with. The base engine is a ProStar 2.0-liter, four-cylinder that puts out 178 hp and 120 lb-ft of torque. The upgraded engine is a revised version of the base unit with a power output of 203 hp and 144 lb-ft of torque.

According to Polaris, the Slingshots outfitted with this engine (SLR, R, and LE) can go from 0-60 mph in 4.9 seconds. So if you want motorcycle-like performance, this is the one to get.

How safe is the Slingshot?

It’s about as safe as a hope and prayer or a motorcycle with seatbelts because that’s all you have. Well, you can also put on a helmet and other motorcycle gear to keep you safe, which I recommend.

The Polaris Slingshot is a blast to drive, but it’s not for everyone 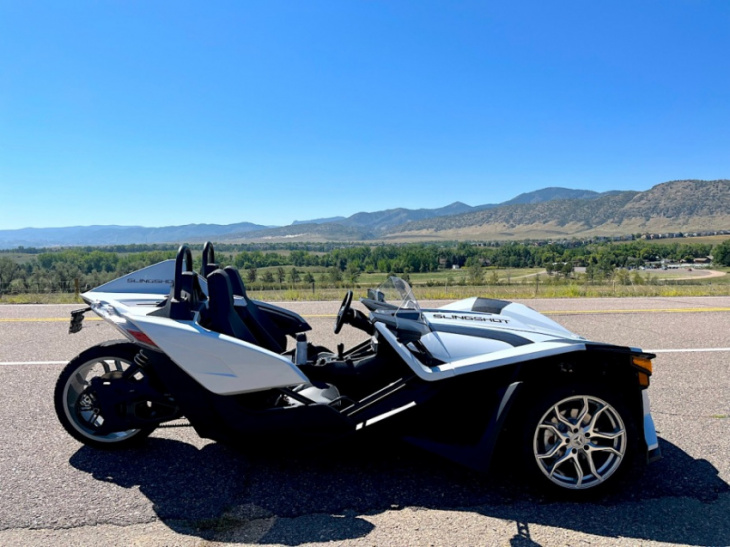 A side view of the 2022 Polaris Slingshot. | Joe Santos, MotorBiscuit

Ultimately, the Polaris Slingshot is a unique vehicle that grabs attention everywhere it goes and provides more excitement than a conventional convertible. The engine noises, whining transmission, and smell from the outside world make every drive in the Slingshot worth it, if you’re into that sort of thing. But for everyone else that isn’t into it, just buy a convertible like a Mazda Miata. At least it has doors, airbags, and a radio that you can hear.

Keyword: 2022 Polaris Slingshot SL Review: This 3-Wheeled Wonder Is Not for Everyone