Sometimes you just want to be different. I talk to a lot of people about SUVs because they almost feel like it’s an obligation to buy one. If I can’t talk them into the vanishing range of wagons on the market, we end up back at SUVs.

“I don’t want an SUV, though. They’re boring.” I hear that a bit. There are plenty of good cars of this type, and they’re hardly excitement machines – unless you’re buying a fire-breathing AMG or M or Audi RS variant with a six-figure price tag.

Every now and again I’ll latch on to the Peugeot range of SUVs. “Oh, no, too weird/French/whatever.” They end up buying a Toyota. But sometimes someone will say, “Ooh, that’s interesting. But is it any good?” I will first declare my love of les voitures Françaises and then I will tell them this: 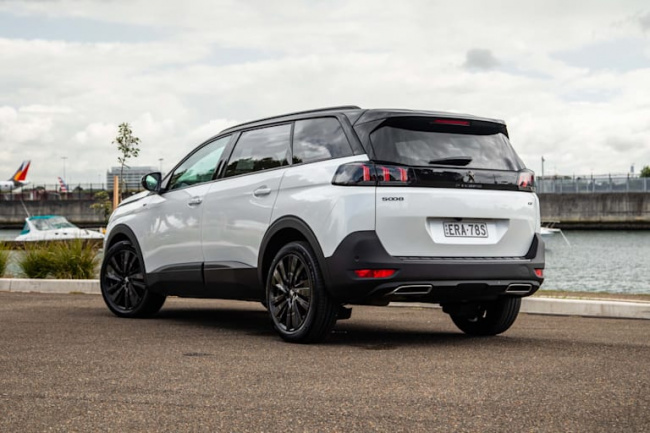 How much is it, and what do you get?

The 5008 GT Sport is a new spec level for Peugeot’s largest SUV.

Visually indistinguishable from the 3008 when viewed front-on, you’ll notice it has been stretched and the rear glass made far more upright to accommodate a third row of completely removable seats.

GT Sport means black wheels, black grille, black roof and, according to Peugeot, it’s been quite popular. It came with the SUV range facelift in 2021, but supply has meant we’ve only got our hands on one now.

For $65,657 (before on-road costs) you can have the petrol-engined 5008 GT Sport and it is only available as such. The diesel GT is about another $600 but doesn’t look nearly as good (in my opinion). 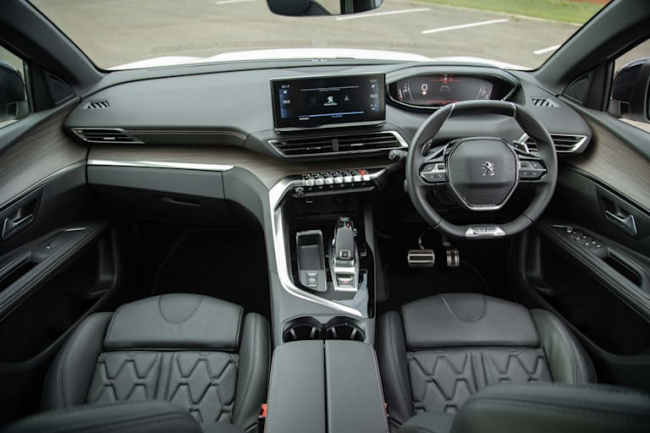 How do rivals compare on value?

There are many seven-seat SUVs, most of which start cheaper than the 5008 GT Sport. Just as well, then, that the 5008 has a lot of charm.

As well as costing more, the 5008 is shorter and slightly narrower than its rivals, which means it’s a bit more city-friendly. It’s technically a mid-sized SUV with an extra row of seats.

The most obvious rival is the Mitsubishi Outlander. Strictly speaking, it’s a 5+2 because the third row is virtually unusable. Not playing in the Peugeot’s favour is that for similar money you can have the Outlander Exceed PHEV, with its decent real-world electric-only range. 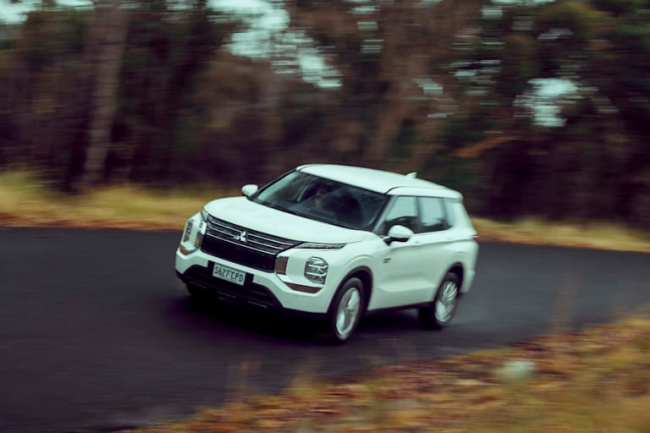 You can spend substantially less on an Outlander and get a pretty decent interior with the less exciting four-cylinder petrol engine but you won’t get the sizzle of the Peugeot’s outstanding interior.

There is also the VW Tiguan Allspace. While it does start in the low $40,000s, it’s not nearly as well equipped. You can obviously spend more and get more, but it’s got a very similar vibe to the 5008 without the inventive interior and striking exterior. 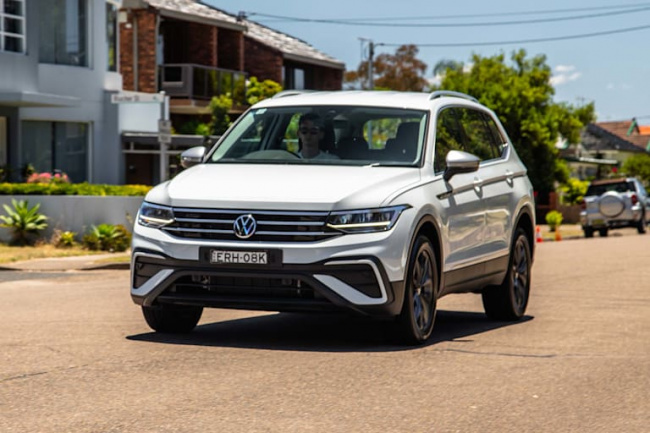 The 5008’s interior is an absolute future classic. While some of the tech is getting on, it still looks fantastic, which is just as well because Peugeot needs to eke sales out of this model for another two or three years.

Its front seats are comfortable and just the right kind of firm. Peugeot’s massage system is actually quite good with its different pressure patterns. Even some top-end cars have weaker massagers than this one.

The materials in the 5008 are lovely and the dashboard design is really cool. I’ve always loved the old-school typewriter-style keys for the shortcut buttons in that brushed aluminium effect. It really is quite lovely and makes up for the sluggish touchscreen. 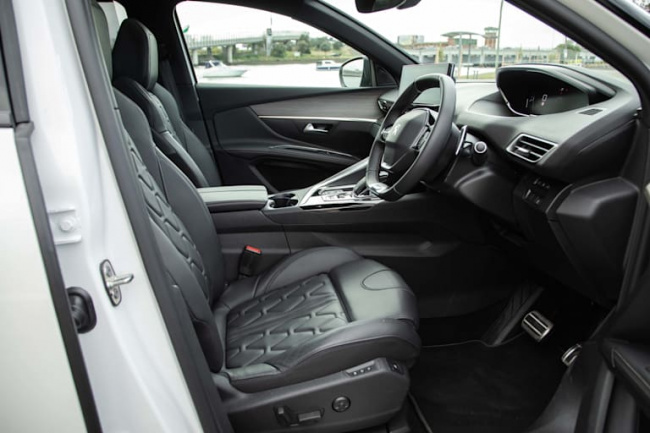 The middle row is made of three separate seats, meaning the central seat isn’t the usual too-high-and-too-hard affair, although it does mean you’ll need to be a slim-hipped trio to fit across the back. The floor is completely flat, which reduces forced footsies, too.

Patterning and stitching on the seats is very cool and as it’s three seats, they’re a 40:20:40 split-fold. There is plenty of legroom and headroom, even with the sunroof, and you can get your feet under the front seats for a little extra space.

There are also air vents to ensure cooling or heating air makes it back there and there’s a separate fan speed controller. You can slide the middle row back and forth either to improve cargo space, bring smaller kids or animals closer to the front or improve third-row legroom. 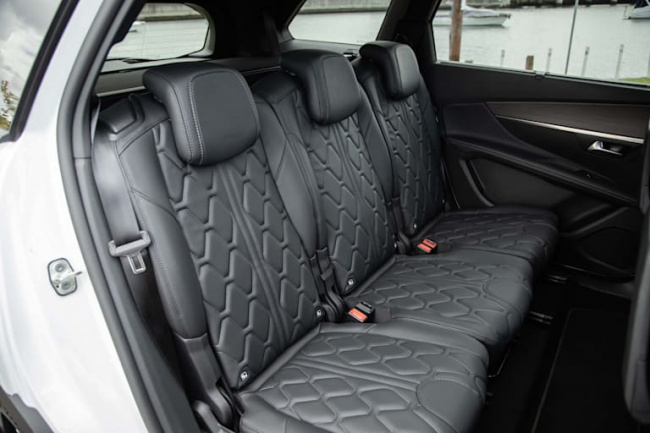 You don’t get a central armrest in the second row but there are airline-style tray tables in the front seatbacks. You can put a cup there but it may not necessarily stay there. Kids love these, though.

Access to the third row of two seats is a little dicey and once you’re in you will agree with my assessment that these are occasional seats. There’s one cup holder and a 12-volt charger, so not even a USB port to keep the devices charged without dumb bulky adapters.

Speaking of boot space and seamless segues, if you do leave the third row of seats in and put them to use, you have 237 litres, which is a small hatchback’s worth of cargo.

Folding the second row down delivers a huge 590 litres. With the middle row fully folded, you’ll enjoy 1670 litres of space (which is measured to the roof). It’s a ton of load capacity for a car that really isn’t that big. 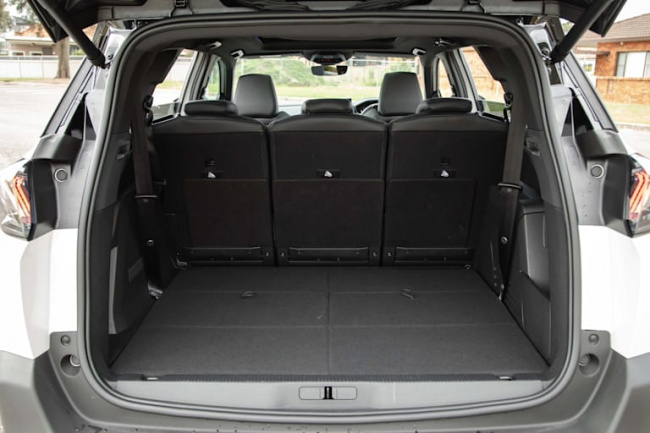 If you were able to close your eyes while driving the 5008, you’d almost swear it was exactly the same as the 3008.

Not long after having the bigger car I drove the smaller car and found it to be breathtakingly similar.

Well of course they are, you say, they’re basically the same car. And yes, they are, but although the 5008 is bigger and boxier you really won’t notice too much of a difference unless you look over your shoulder. 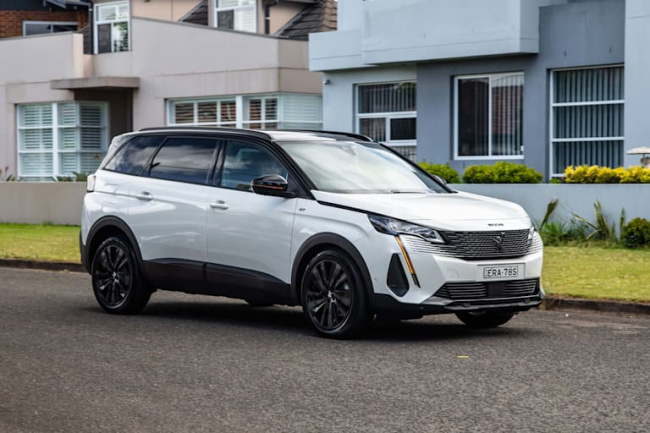 Part of the illusion is probably to do with the identical driving position and mechanical set-up. The small steering wheel instantly makes it feel darty, with an exceptionally well-sorted chassis keeping up with the quick steering.

The Ford Escape has quick steering and can sometimes feel too darty, but Peugeot engineers have successfully dialled out the lurching direction change.

Where you would notice the difference between the two is overall ride quality. The slightly longer wheelbase of the 5008 delivers a marginally more composed ride. You’ll note I didn’t say “better” because they’re both such comfortable cars with one person or a full complement on board. 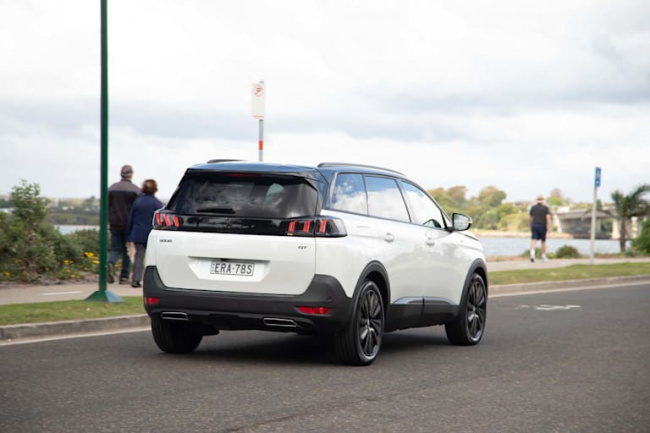 At first glance, the idea that a seven-seat SUV could be hauled by a 1.6-litre turbo with just 133kW and 250Nm seems a bit silly. And it should, but the eight-speed automatic transmission does a terrific job of making the most of modest outputs.

It will slow markedly when fully loaded, but the willing engine and well-calibrated shifts of the transmission keep things on the boil. The 1.6 isn’t as good at suppressing lag as its 1.2-litre three-cylinder version, but it’s only a short moment before you’re on your way as peak torque arrives at 1650rpm.

The diesel is torquier by quite some margin but the petrol in the GT Sport is just a better engine, with far less lag and a more flexible feel even if the diesel pulls harder.

I’ve driven both engines a lot in this car now and despite feeling slower, the petrol is nicer. 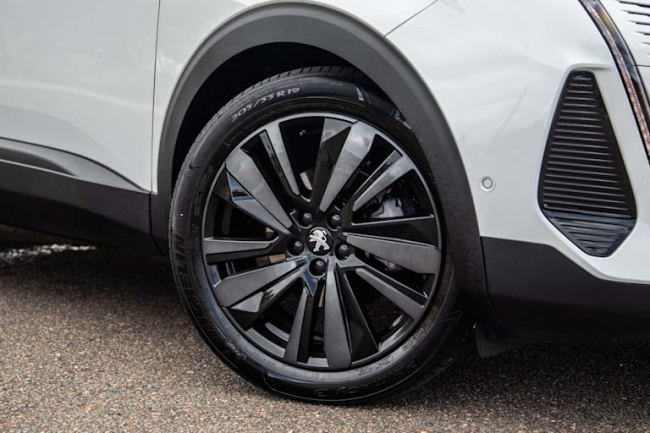 How is it on fuel?

Peugeot claims 5.6L/100km on the combined cycle, which seems a little ambitious for a big seven-seater.

I got 7.5L/100km in the week I had it, which included mostly suburban running about, so it’s not bad going. The official figure is remarkably close to the 2.0-litre diesel’s 5.0L/100km. 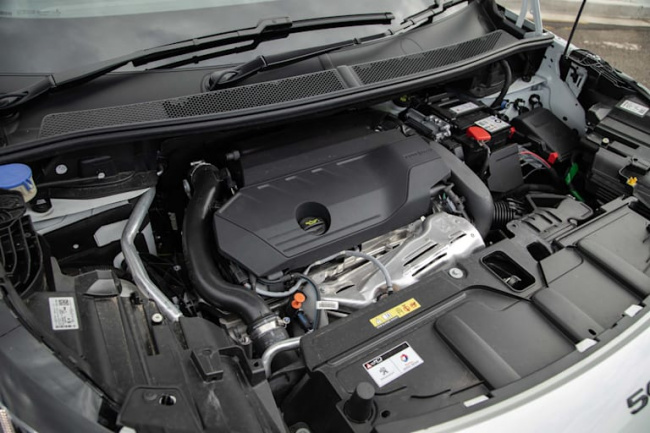 How safe is it?

The curtain airbags reach all the way to the third row, which is worth knowing if you’re cross-shopping against the larger Kia Sorento or Hyundai Santa Fe.

A capped-price servicing regime operates for five years and you’ll need to return to the dealer every 12 months/15,000km.

The company now offers pre-paid servicing plans which offer fairly hefty savings over pay-as-you-go servicing. At a recent Peugeot event for the launch of the 308, executives said that this was to combat a perception of high service costs on European cars, even though capped-price servicing has been available for some years.

Peugeots aren’t for everyone. They’re not cheap, they’re not all-wheel drive and for some, they just can’t get over a reputation that has lingered long past its truthfulness.

Peugeot, like its Citroen sibling, does interesting and does it really well.

The 5008 is not the best seven-seat SUV but it’s certainly the pinnacle when it comes to styling and charm.

It’s great to drive, looks terrific and has a good amount of space for a car of its footprint. While the tech is getting on a little, it still works just fine while the rest of the car gets on with being fun and delightful for everyone involved.

As good as its competition undoubtedly is, and often cheaper, the 5008 is properly individual – but has the substance to go with it. 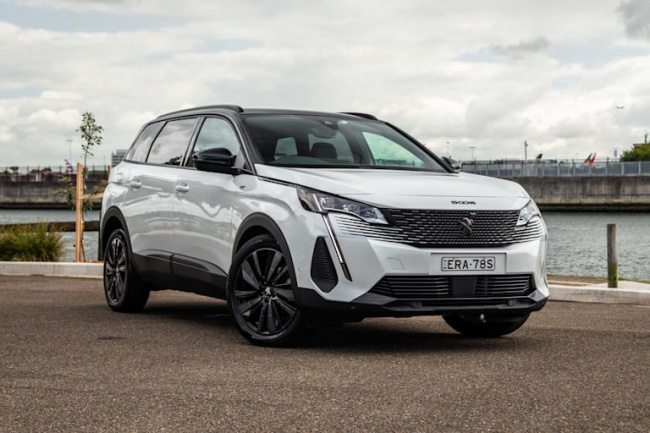 Announcing the Peugeot E-LION PROJECT. Peugeot’s approach to electrification is a well-researched response to the needs of a changing world