The Mazda CX-60 is an all-new 300bhp SUV that comes with plug-in hybrid power, new tech and a high-quality interior… 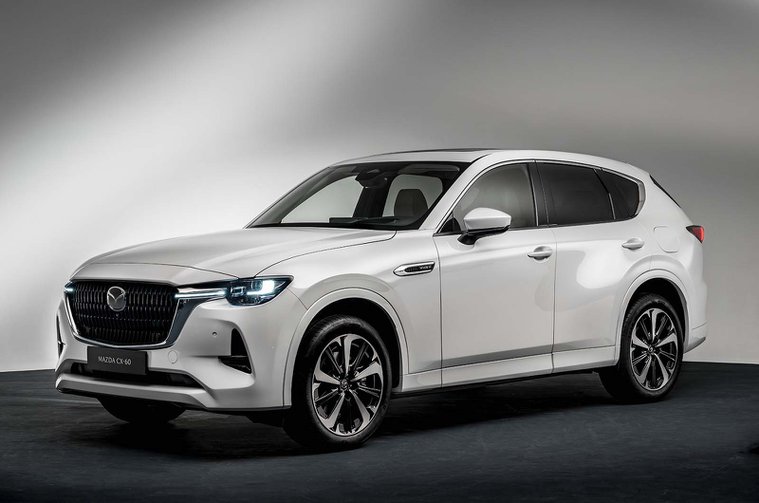 In Britain, we have a tendency to deviate towards the finer things in life – whether that’s with our choice of tonic, designer footwear, or preference for a premium supermarket. Unsurprisingly, this is also a philosophy in which we tend to lean to with our taste in cars, and Mazda has taken note of this. This is why the Japanese brand is trying to move upmarket, starting with the all-new Mazda CX-60.

Having been designed and engineered completely from the ground up, the CX-60 will be looking to compete against rivals such as the Audi Q5, BMW X3 and Lexus NX. Lexus in particular will be in Mazda’s sights, largely because it’s the only other premium Japanese brand in Europe.

The styling of the new CX-60 alone is evidence of the company’s new direction. Up front, the CX-60 displays a tougher, bolder look with a wide stance and long bonnet. The grille, indicators and LED headlights are also much more tightly integrated compared with current models such as the CX-5. 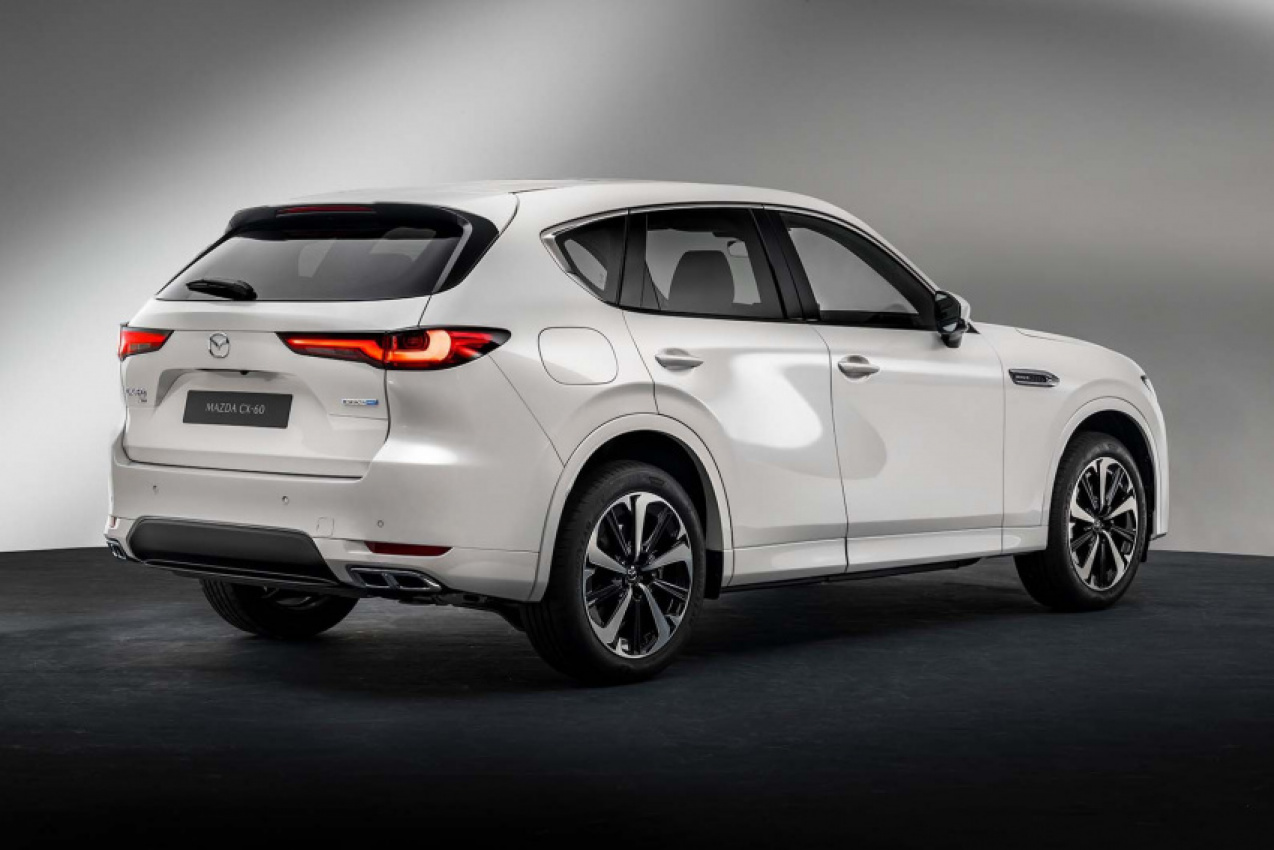 Around the side, Mazda’s signature smooth bodylines are present bar some strongly sculpted wheel arches. On lower trims, these arches will be clad in black plastic to give a more rugged look, and on upper trims the arches will be body-coloured. Around the back, a pair of wide, high-mounted LED tail lights also add to the sense of toughness as seen on the front end.

It’s in the interior, however, where Mazda has placed a particular focus on luxury. We’ve had the opportunity to sit inside the new model, and can confirm the driver’s seat is nicely supportive and the materials on display are of a high quality. Leather, metal and wooden trim pieces feature in the places you touch and see regularly, while even the plastics used lower down feel soft. 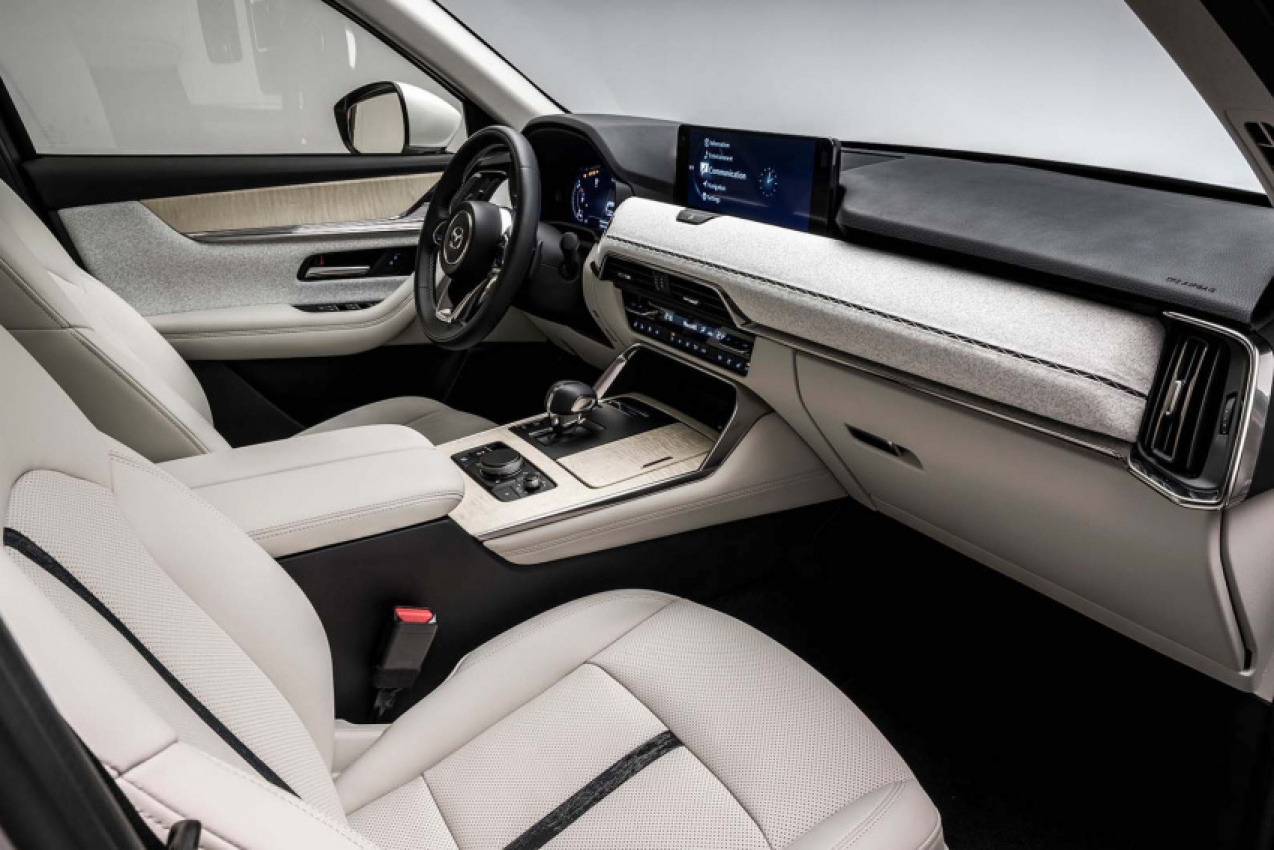 The layout of the dashboard is also refreshingly simple, with a large 12.3in touchscreen spanning the central dashboard – and this can also be controlled via the screen or a rotary dial on the centre console. The climate controls are also mounted within good reach of the driver and consist of multiple toggle switches.

Overall, we like the mixture of both physical and touch-sensitive controls, largely because it’s much easier to operate while driving. This is particularly in contrast to rivals such as the Volvo XC60, which has a touch-sensitive set-up for both its infotainment and climate controls, and thus is much more distracting to operate on the move. 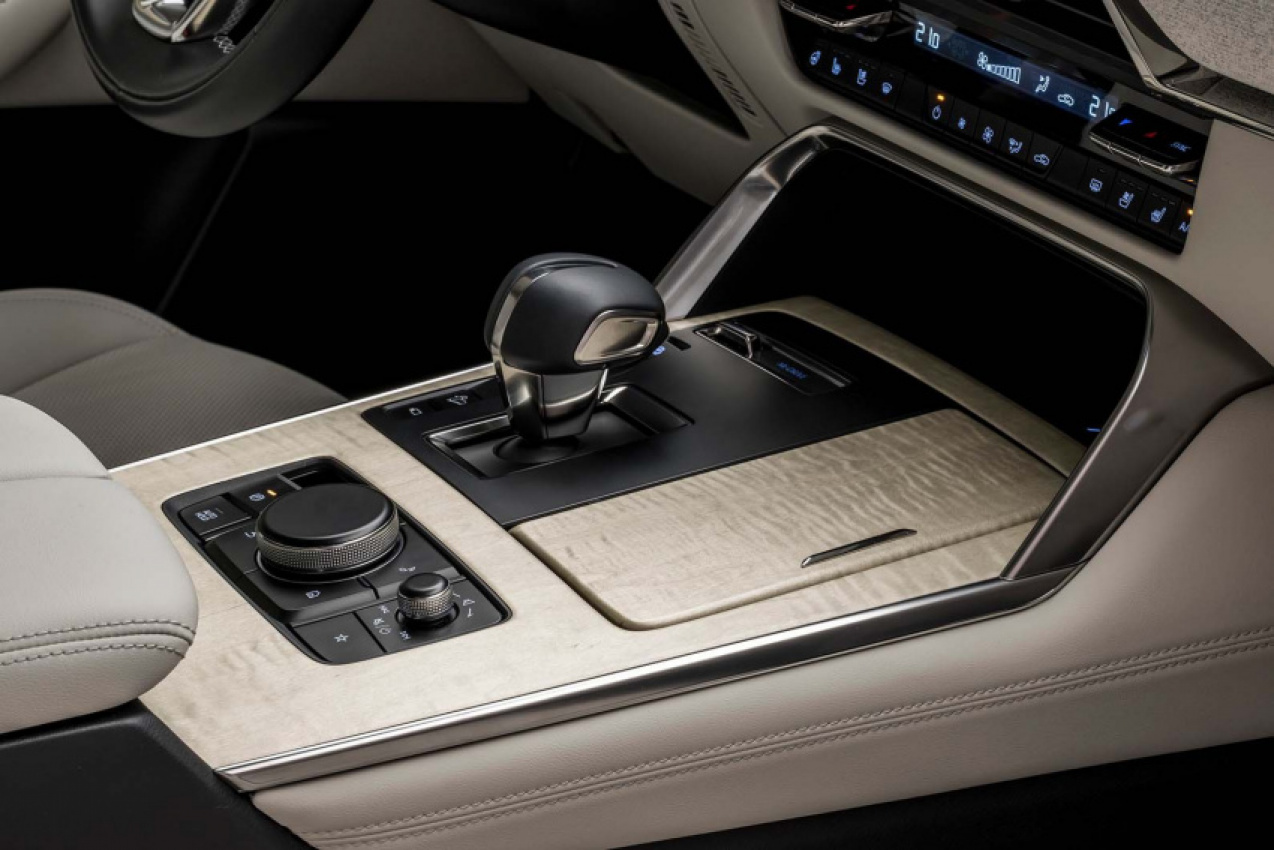 A head-up display is also fitted as standard on all models to limit driver distraction, and there’s also a 12.3in digital dashboard, which can show you driving data as well as the sat-nav map.

The new CX-60 will feature Mazda’s latest Connect infotainment system, which includes a new ‘See-Through View’ 360-degree camera system. This gives the driver a much clearer view around the car when manoeuvring, with the screen giving the impression that you can see through the centre of the car for a full 360-degree view.

Getting comfortable in the CX-60 is very easy, and this is largely thanks to a new ‘Driver Personalisation System’. This uses technology that identifies the driver’s stature, and it adjusts the driving position (including the mirrors and steering wheel) to a recommended setting. The driver is then free to adjust the seating position to suit, and the system memorises the position for the next journey. 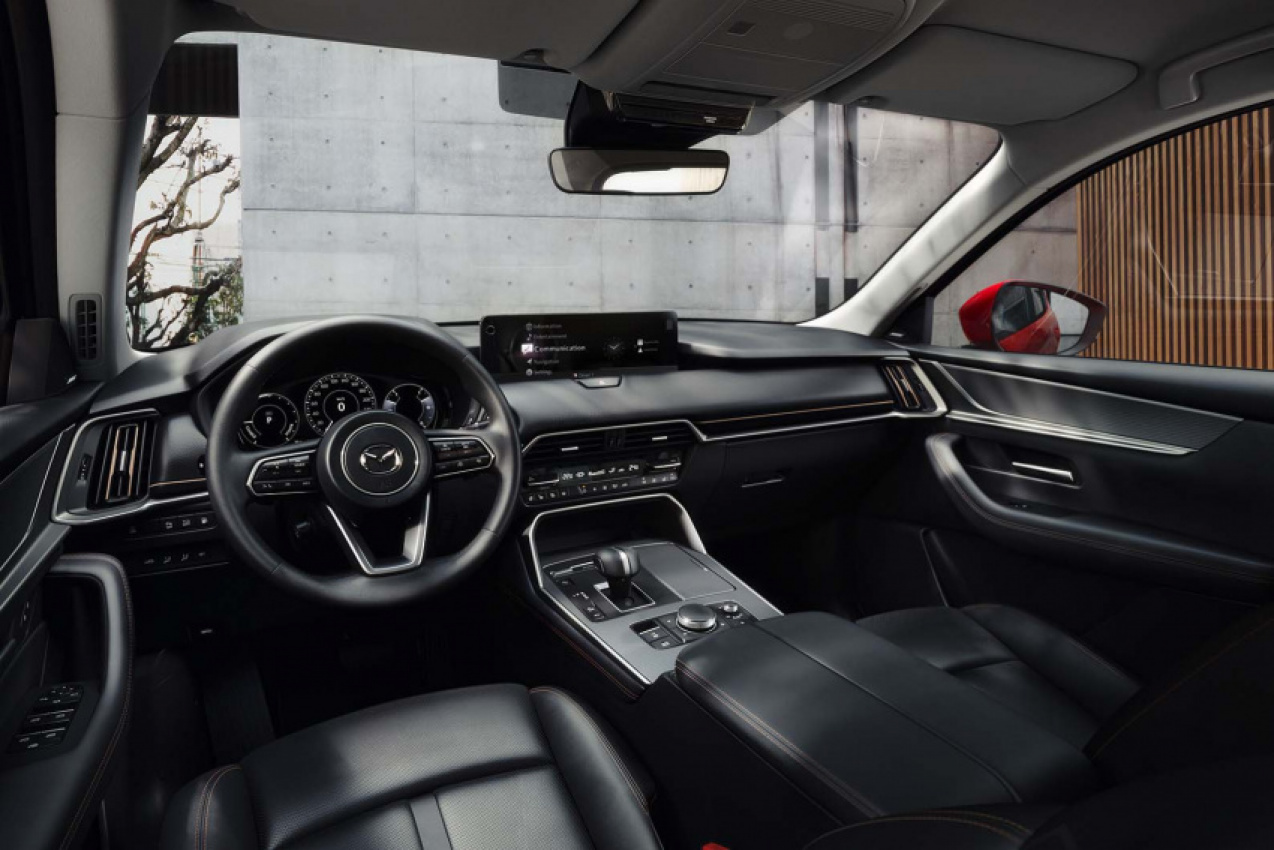 Space up front is plentiful, however space in the rear seats is less impressive. Headroom is good, even with the optional panoramic sunroof fitted, but knee and legroom is a bit tight if you’re sitting behind a driver of taller nature.

The boot is a good size, at 570 litres, which is more than you’ll find in the Lexus NX, but less than the Jaguar F-Pace. But overall boot space is good, and your holiday luggage is unlikely to trouble the CX-60. The battery is also located underneath the centre of the car, which means that there’s no intrusion to the boot space.

The seats also split and fold in a handy 40:20:40 configuration, which adds an element of flexibility for those who wish to carry both passengers and longer items. You can also easily fold the seats via toggles from the boot.

Currently, the CX-60 is only available with five seats, but a larger CX-80 is set to arrive at some point in 2023. That car will essentially be a stretched version of the CX-60 with seating for up to seven.

Charging sockets are widespread in the CX-60, and in the back seats there’s both a domestic socket and two USB-C charging ports. Up front there’s also USB-C charging capability and a 12v power outlet.

Under the bonnet, the new CX-60 will be available as a petrol, diesel and plug-in hybrid. A fully-electric version is also rumoured to be on the way, however this is yet to be confirmed. At launch, the car will be available as a 323bhp plug-in hybrid (PHEV). This set-up combines a 2.5-litre four-cylinder petrol engine with an electric motor and a 17.8kWh battery, propelling the CX-60 to 62mph in 5.8sec. Torque is also rated at 369lb ft. 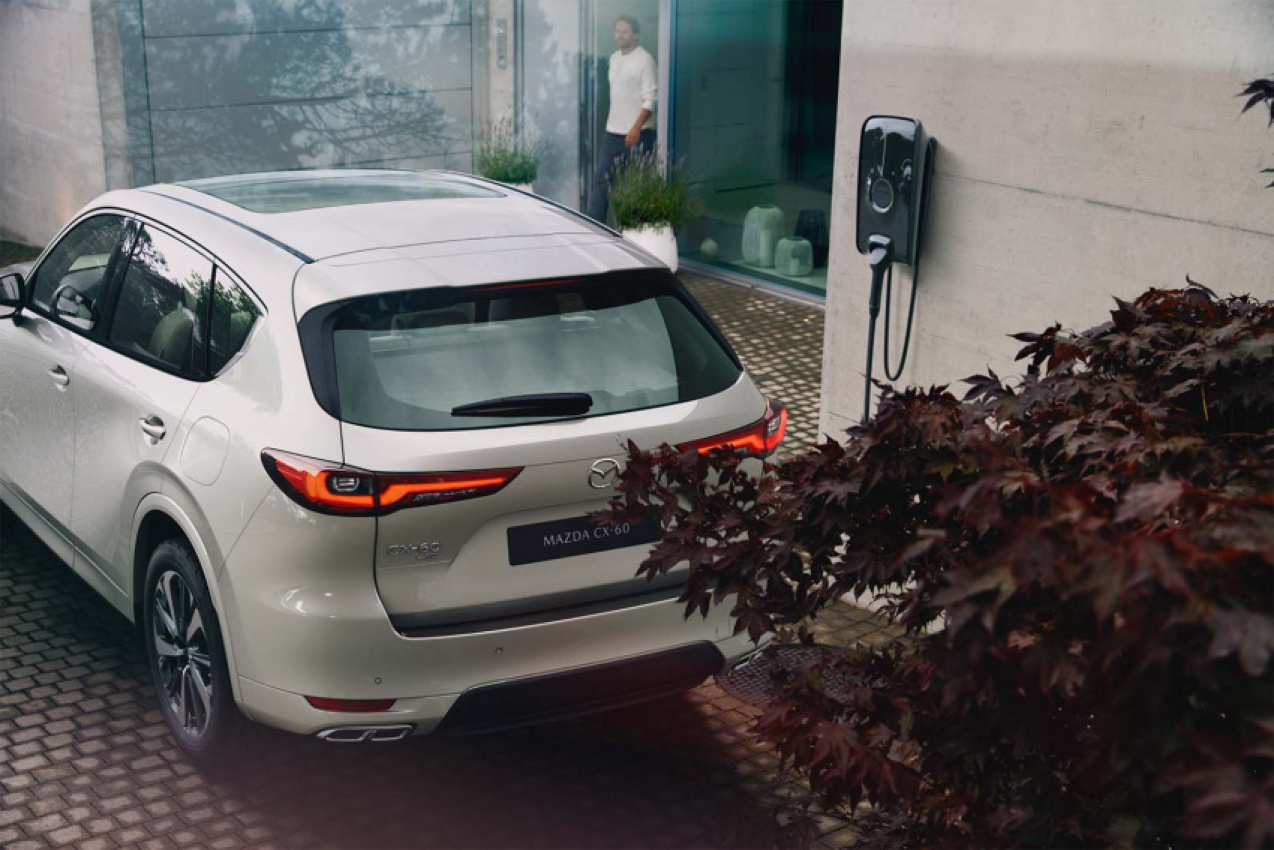 With a 7.2kW AC charger, a 0-100% charge can be achieved in up to four hours, and when making the most of the car’s electric motor, fuel economy is estimated at up to 188mpg – but you’ll only get close to that if you regularly top up the battery. CO2 emissions are as low as 33g/km – which means the CX-60 should be cheap to run for company car drivers.

Further down the line, the CX-60 will be available with two brand new engines – a 3.0-litre straight-six petrol and a 3.3-litre straight-six diesel. Both engines will use a 48v mild hybrid system, which means that at lower revs there’s some additional electric muscle to assist the engine. This should help to improve performance, fuel economy and emissions. 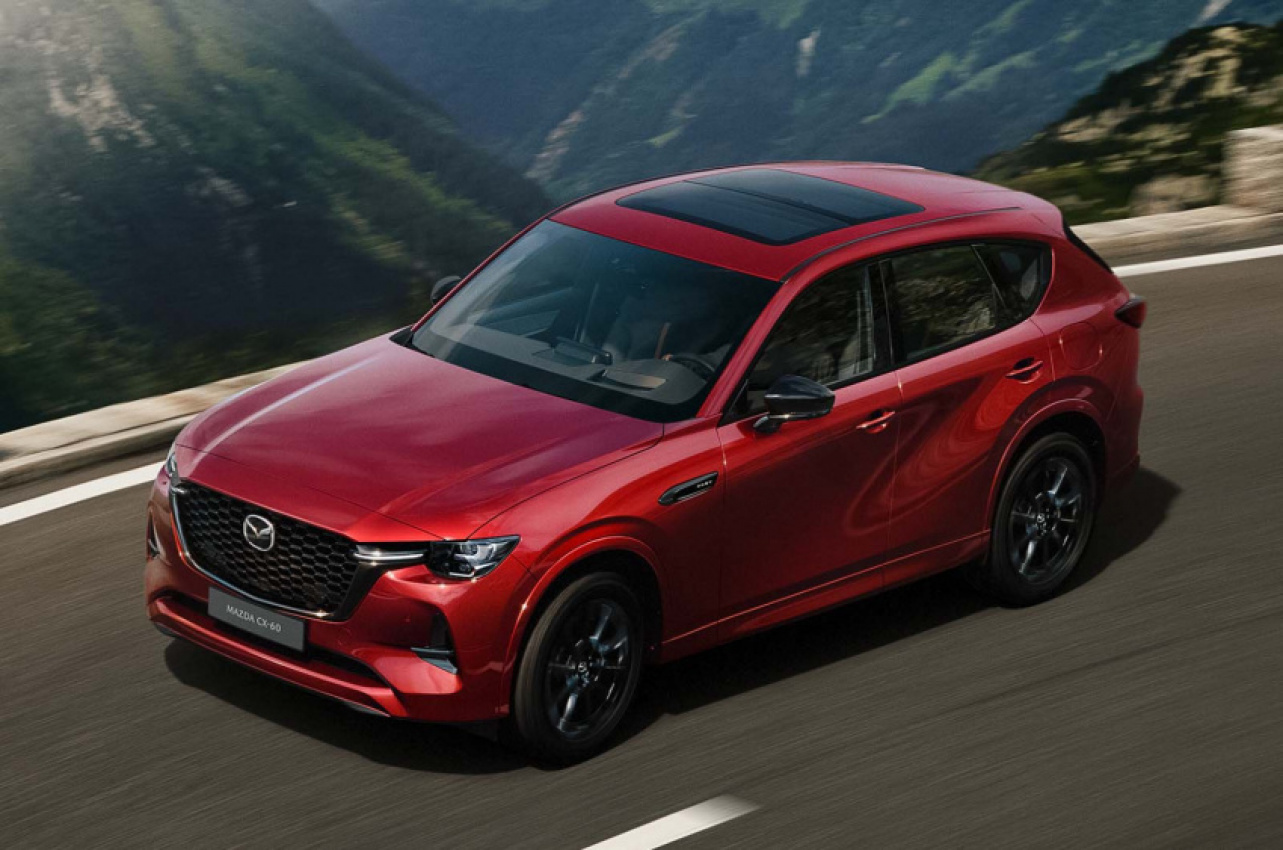 Mazda has made a particular effort to give the CX-60 a competitive towing capacity, and it’s rated at 2500kg – which is significantly higher than the CX-5’s at 1800kg. This means you should be able to tow larger 6 berth caravans. Compared with rivals, the CX-60’s towing capacity is also slightly higher than the Volvo XC60’s, which is rated at 2400kg.

In the UK, the CX-60 PHEV will be available in three trim levels – Exclusive-Line, Homura and Takumi. The Exclusive-Line is the entry-level trim and starts from £43,950, and as standard it comes with 18in alloy wheels, LED headlights, lane-keep and blind-spot assist, a heated leather steering wheel and a powered tailgate. 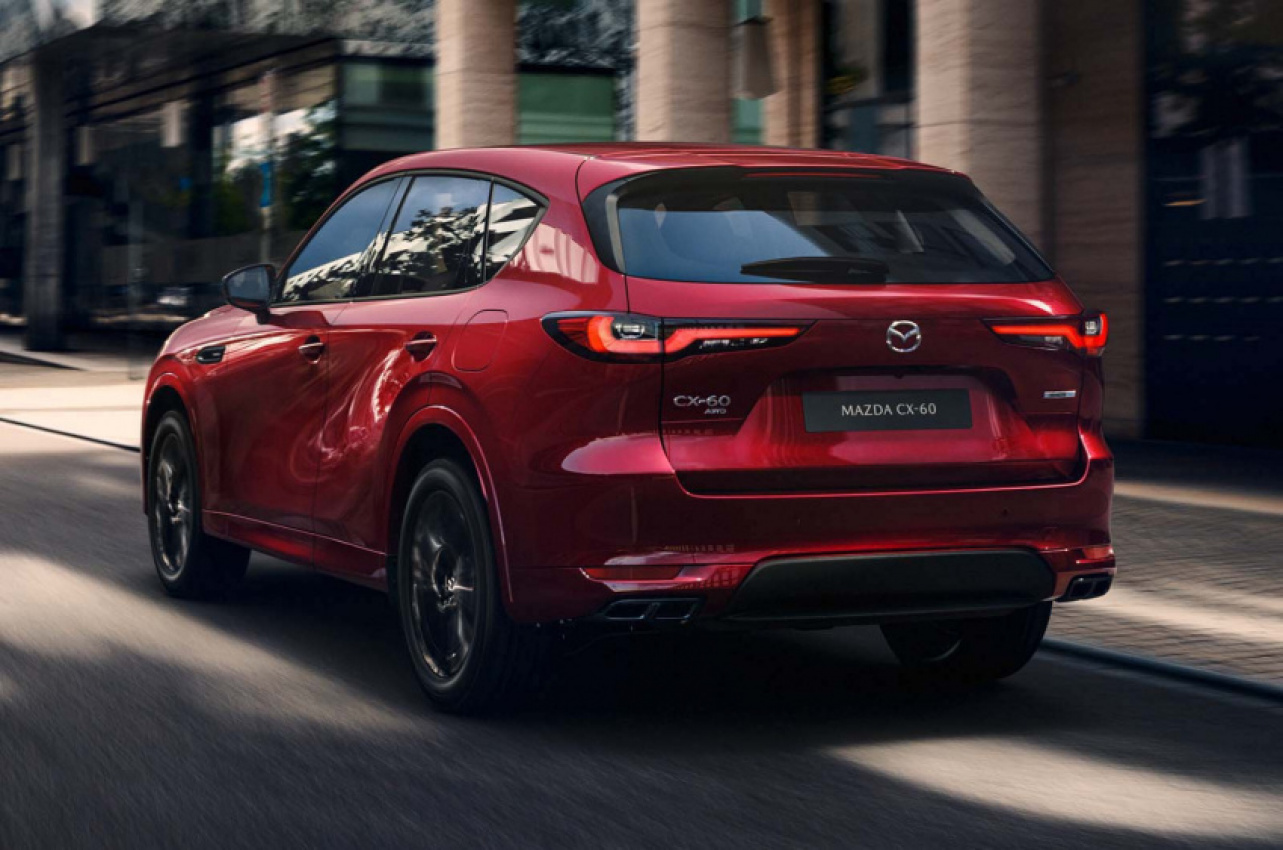 The mid-level Homura trim starts from £46,700, and comes with a sportier look, 20in alloy wheels and electrically adjustable front seats. At the top of the range sits the £48,050 Takumi trim, which adds chrome detailing, body coloured mirrors and white Nappa leather.