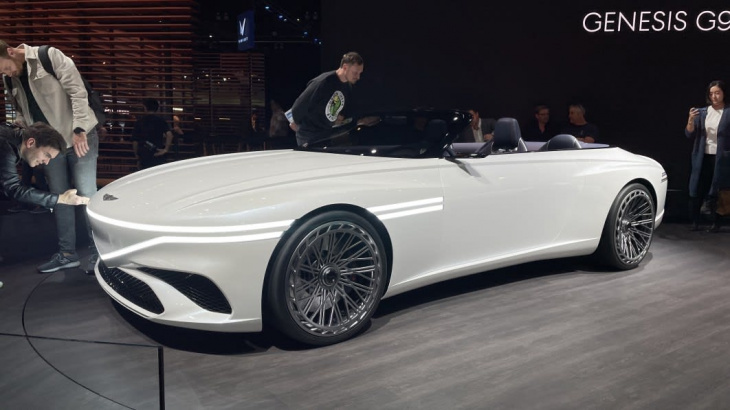 Unlike this year’s Detroit Auto Show, the L.A. Show is in its second year back since the start of the pandemic. While not necessarily much bigger or better-attended this year, the show did feature more major debuts. So we’ve once again rounded up our favorite car reveals of the event.

An interesting thing to note is that almost every one of our picks is highly electrified, either as a hybrid or full-electric car. They also span a wide range of accessibility from entry-level to exotic. Check them out below, along with our full coverage of the show, and let us know what your favorites were in the comment section.

The original Fiat 500 that was introduced in 1950s postwar Italy was designed to make automobile ownership possible for people who otherwise might not have been able to afford it. I see this latest Fiat 500e as something spiritually similar, so long as Fiat doesn’t mess it all up by pricing it too high. In Europe, it’s priced well below the Mini E and Nissan Leaf, and with more electric range. Follow that formula in the States, and I think it’s poised for success as potentially the least expensive new EV in America, complete with fun and funky Euro flair. –Senior Editor, Consumer, Jeremy Korzeniewski

The Ioniq 6 is an absolute stunner in person. It has the presence of a premium sedan, and Hyundai clearly went the extra mile to make that happen. The interior doesn’t quite live up to the premium vibe. It was clearly designed for a Hyundai rather than a Genesis. But that’s OK; nobody expects a Cadillac interior in a Chevy, either, and the Ioniq 6’s looks more than make up for its humble cabin. Even sitting next to the absolute grand slam that is the N Vision 74, this thing turns heads. Long live the sedan. –Associate Editor Byron Hurd

Not only is the Genesis X Convertible the most photogenic car from the L.A. Show, it’s exactly the sort of EV to get this guy excited about luxury droptops again. It’s a concept, but not too conceptual to envision how it could translate to a production car without losing its charming proportions and lighting, among other things. Knowing that Genesis has the electric powertrain to match the X’s looks with potency and smoothness makes this all the more tantalizing. It’d be great to see the brand distinguish itself from its Hyundai Group brethren — and the rest of the industry — by taking this idea of a sporty, luxurious electric convertible and running with it all the way to the end of the production line and beyond. –Senior Editor, Green, John Beltz Snyder

The Toyota Prius has always been an important car, and sometimes it’s been practically revolutionary (particularly the first two generations). But now, it’s a key vehicle for Toyota sales, for providing efficient transportation, and it’s actually pretty darn cool. The crazy windshield rake, the wide rear fenders and 194 to 220 horsepower all are, or were, extremely un-Prius. It’s even available with all-wheel drive or probably around 37 miles of electric range. Practicality, style and enough pep to be fun? I’m here for this Prius. – News Editor Joel Stocksdale

When selecting my favorite reveal, I always go back to the question: “What car would I most want to drive home from the show?” This year in Los Angeles, it was easy. Hands-down I was most excited about the Porsche 911 Dakar, an off-road 911 that draws on the company’s rally lineage. Props to Porsche for making this limited-run model feel special. It’s also a savvy way to approach auto show reveals in the current climate. In the past, the 911 Dakar might have been an oddity, almost a trick play revealed at the Frankfurt or Geneva shows and gone unnoticed by the U.S. press. By giving this deep-cut 911 the full glare of the spotlight in L.A., Porsche rewarded its enthusiast base and also created buzz for potential new customers. — Editor-in-Chief Greg Migliore