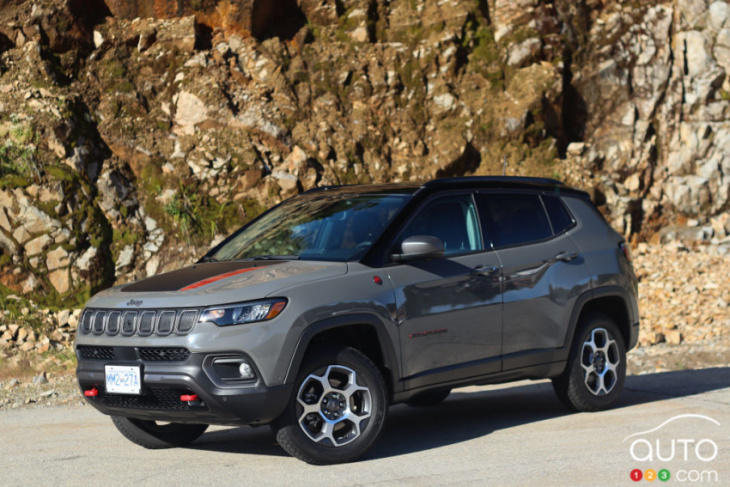 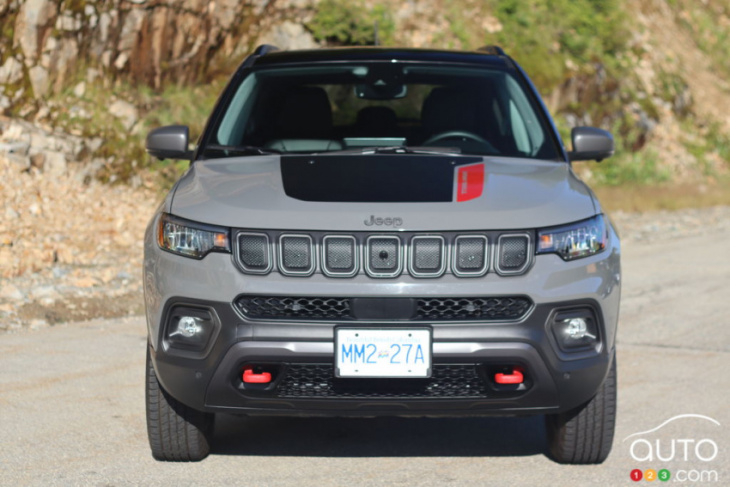 •    This Trail-Rated Compass is full value for the Trailhawk name.

The Jeep Compass has had an interesting life path. It started out as a small, funky alternative to the Grand Cherokee and Liberty and that was fine. But its awkward front-end styling veered a little too far into the soft-roader realm and you had a feeling they tacked the customary Jeep seven-slat grille on there to remind you that it was, in fact, a Jeep.

Then, in 2011 it got a facelift to bring it more in line with the Grand Cherokee of the era, and that was good, but still not quite there.

Fast forward to 2018 and an all-new Compass debuted. Once again, they turned to one of its bigger brothers for inspiration – this time, the Cherokee. Finally, it hit the mark. It now offered a great mix of tough and trendy and in doing so, brought the Compass into a more rugged realm. 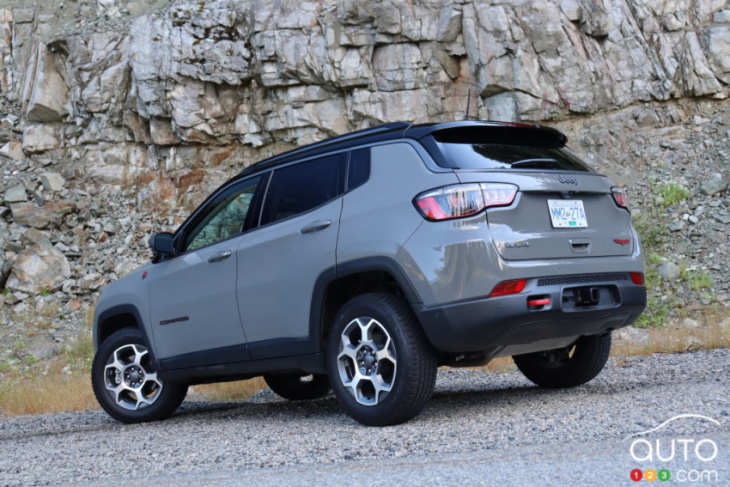 Outside
Both those qualities are taken further in the edition that was my tester the Trailhawk. That’s much more than a stylistic upgrade. The Jeep rides higher, the Falken Wildpeak off-road tires are chunkier and there are twin red tow hooks up front and a single hook out back. Plus, there are some pretty skookum graphics on the hood and the all-important Trail Rated badge on the front fenders, a badge you can get only if you’ve upgraded to Trailhawk spec.

With its squared-off fenders, blacked-out grille and two-tone wheels, meanwhile, this Compass may be a compact-slash-subcompact crossover, but it looks like it will take quite a lot to stop it. It looks great, and It seems I’m not the only one. When Toyota released the TRD Trail version of its ultra-popular RAV4, it felt like it was taking direct aim at the Compass. 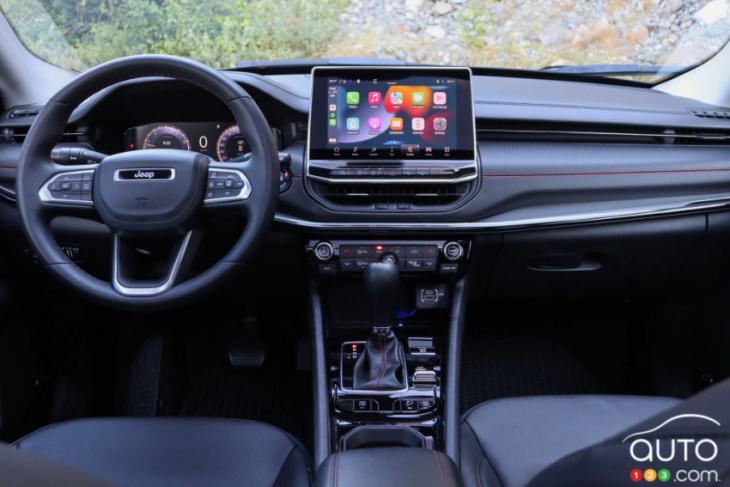 Inside
The Trailhawk comes equipped with premium vinyl seats that get cloth inserts and contrasting red stitching and wouldn’t look out of place in something much more luxurious. There’s more of the stitching on the dash, steering wheel and armrest and a 8.4-inch display just big enough for the environs.

The shift lever is a little on the chunky side, though, and all that piano black around it is a dust magnet. The digital gauge cluster, meanwhile, can easily be swapped between analogue and digital looks and the various data on display there can be cycled through by pressing a button that minimizes everything and lets you browse the menus.

Speaking of that central display, it’s where you’ll find your Uconnect infotainment, still one of the better interfaces in the business. The graphics are big, the touchscreen is responsive and a band at the base of the display features shortcuts to your favourite apps and menus. Apple CarPlay and Android Auto, meanwhile, are both wireless. When I used it, CarPlay worked seamlessly, hooking up as soon as I started the engine before I even thought about it.

There’s also a wireless charge pad at the base of the centre stack. It works as a charger, but also makes for a handy storage bin. 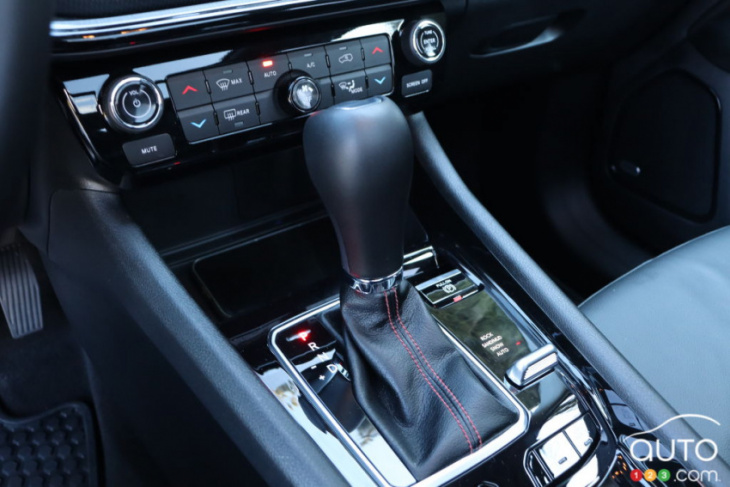 The way that all works is a nice microcosm of the rest of the Compass. The cupholders both in the centre area and on the doors are big enough to fit most containers, with the door items fitting water bottles I always have trouble getting in the same spot in other vehicles.

If I had one complaint about the storage, it’s that the bin beneath the armrests between the front seat is on the small size. Not so much in terms of depth; more in terms of the size of the opening itself. 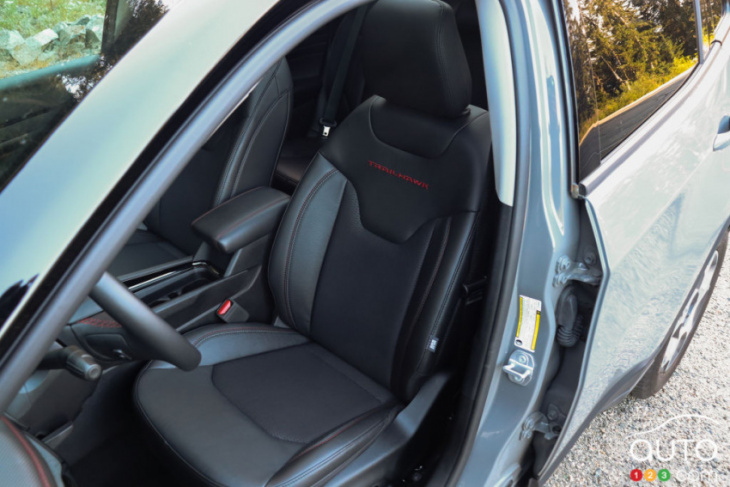 Occupant comfort
Both the back and front seats have the space, but it’s more about how the space is used. There are very few sharp edges or corners to strike errant knees or elbows on, so getting in and out is easier – that’s a big deal in smaller vehicles.

Even with the full-length moonroof, headroom is also generous enough that adults will be fine in the back. The seat padding should be good for most any body size, but I could have used a little more bolstering because with that leather, it can be a little slidey. A small detail, but one I couldn’t quite shake.

Of course, this being a compact crossover, most probably aren’t too bothered about how much they can comfortably wind through sport car-spec backroads. In a vehicle that’s Trail Rated and adorned with those now very recognized Trailhawk badges, they will likely be going off road, and you do need seat support for that application. 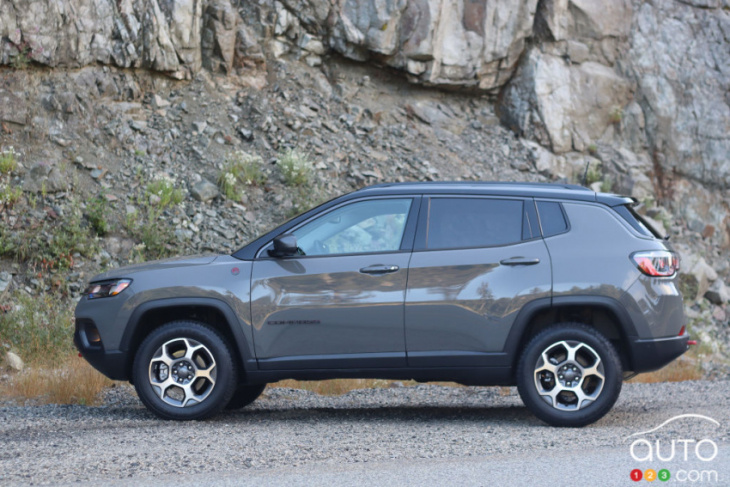 On (and off) the road
In Trailhawk form, the Compass gets increased approach and departure angles, with the former almost doubling that of the standard Compass. You’ve also got more ground clearance and an improved breakover angle, which is all very indicative of a pretty serious conversion. Add the Jeep Active Drive Low 4 x 4 system with its 20:1 crawl ratio, and you see just how well – on paper – the Compass Trailhawk should be in off-road settings.

So, naturally, I had to try it out.

I took it on one of my favourite forestry roads where I’ve tested everything from Volvo V90 Cross Country wagons to Nissan Frontier Pro-4X pickup trucks, fully expecting the Compass to give it the Scout’s try. Although with that short wheelbase and its relatively light weight, I thought it might be a little overmatched.

Right away, I found out that it was not.

The beginning of the run is filled with little divots in the washboard surface that tend to rattle and shake a vehicle like nobody’s business, to the point where I’ve had to really grab hold of the wheel lest I get suddenly bounced off the road. In the Compass Trailhawk, these were taken with relative ease and no drama. Sure, this road, while rustic, does get maintained a little, and perhaps that pockmarking had been a bit improved. But the bottom line was that I could see the holes, but not feel them near as much as I thought I would. Hardly any mirror or cowl shake, never hit the bump stops and the Compass just displayed huge confidence the whole way.

It's done with little electronic trickery, too. There are four drive modes, but there isn’t one that’s Gravel, which is what’s best suited for this surface. The closest would be Snow mode, so I went with that and it was fine, but that’s more about the suspension and chassis tuning than it was about electronic aids. 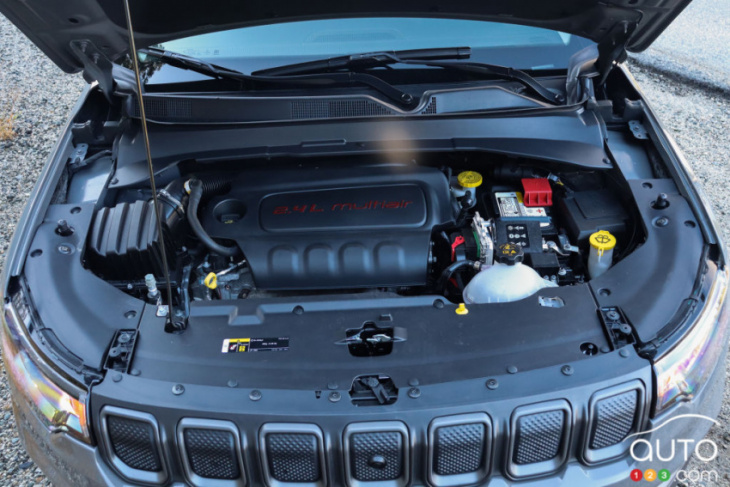 The powertrain
The Trailhawk doesn’t see any changes over the standard vehicle and so makes use of a 2.4L Tigershark Multiair four-banger. That’s a pretty fancy sounding name, but at 177 hp and 172 lb-ft of torque, I wouldn’t call it a power monster, necessarily. Those specs are fine, but even though it comes paired with a 9-speed auto transmission, it does get a little stressed when passing or climbing at highway speeds. It starts to yell and hunt for gears more and just feels a bit out of sorts.

The final word
Darned if the Compass Trailhawk isn’t incredibly good at what it’s supposed to be good, though. This little baby – well not baby; toddler, perhaps – crossover is full-value for the Trailhawk name and don’t let anyone tell you different. Good on Jeep for taking that badge and the Trail Rated badge and ensuring that any vehicle to which they’re attached is worth the badge, even at this level. 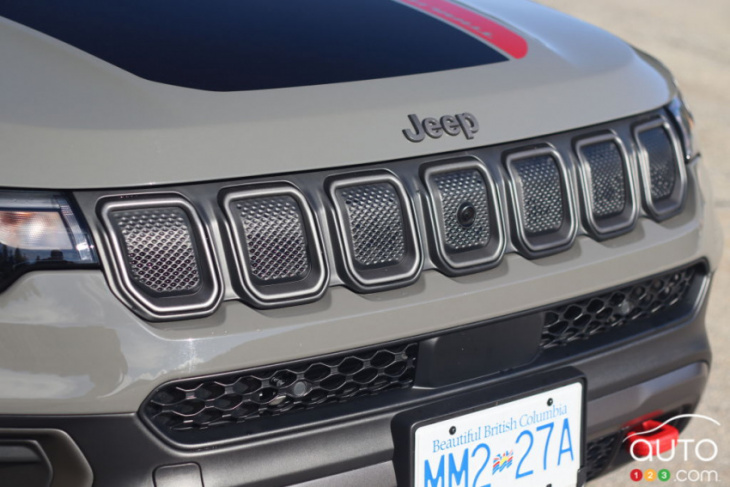 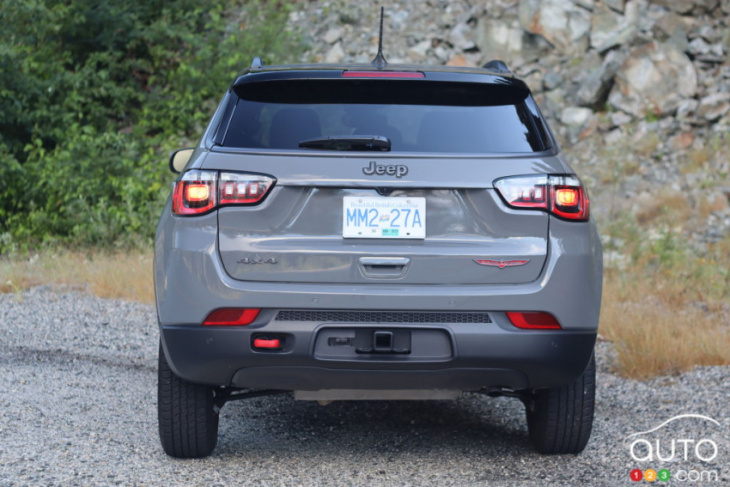 A city car based on an e-2008! Doesn’t sound true Jeep. Enough faux off-roading. What’s it like on road? Does the Avenger handle like a superhero? What’s the efficiency and range? What’s it like inside? ► Baby Jeep SUV driven► Electric power only in UK► Off-road capable, costs £34k This is the ...

Beware of the 2016 Jeep Compass Avoid the 2016 Jeep Patriot What used Jeep SUV should you buy instead? Vehicles have become more reliable and offer better safety and more features. That means buying a newer used car makes more sense than ever. With a pre-owned vehicle, you get ...

Jeep is having its fans name its next electric SUV; the vehicle is called the Electric Wagoneer in the meantime. Jeep has always had a deep connection with its fans. Everything from the Jeep offroading events to the signature Jeep wave shows how connected the brand and its fanbase ...


View more: You get to name the next Jeep electric SUV


View more: Jeep Gladiator Pros and Cons You Need to Think About Before Your Next Purchase

Why does the 2022 Ford Bronco have the best resale value? Is the Wrangler or Bronco more reliable? Does the Bronco or Wrangler cost more? The battle between the Ford Bronco and the Jeep Wrangler rages on as the Bronco attempts to rival the Wrangler. Both of these off-roading ...


View more: The Ford Bronco Stole a Significant Title From the Jeep Wrangler

Enthusiasts are invited to suggest a name, with the winner to get a $40,000 ski trip to Jackson Hole Mountain Resort for four.

The 2023 Jeep Grand Wagoneer L Lands a Hurricane of Excellence

SUV purchase: Do I buy a used Skoda Kodiaq or the new Jeep Meridian

The Jeep Wagoneer S Electric SUV: What You Need to Know

Wheeling Hancock Pass via Wrangler, 4Runner & Bronco: On the Trail

Jeep's price creep continues! Prices for models in the Jeep range up by thousands, Cherokee gone

Get Rugged Using This 1948 Willys-Jeep CJ-2A

The Jeep CJ Surge is a restomodded electric off-roader

My 2022 Jeep Compass petrol AT: Observations after clocking 7000 kms

All-electric Jeep Compass in the works

Monsoon drive in my Jeep Compass to Lavasa: My quick review of the SUV