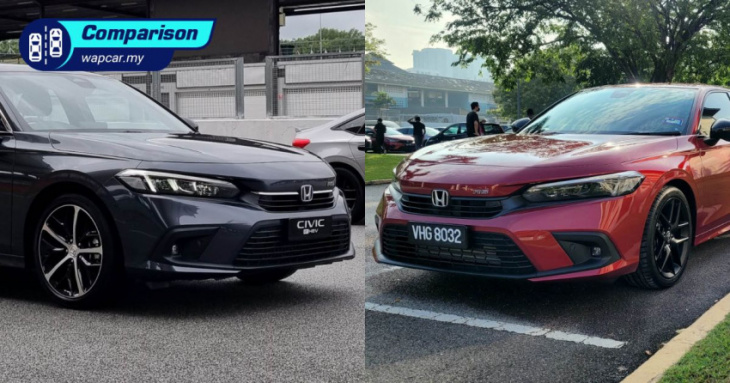 Hot off the launch floor is the new 2022 Honda Civic e:HEV RS, Honda Malaysia’s newest addition to their growing line-up of electrified models. 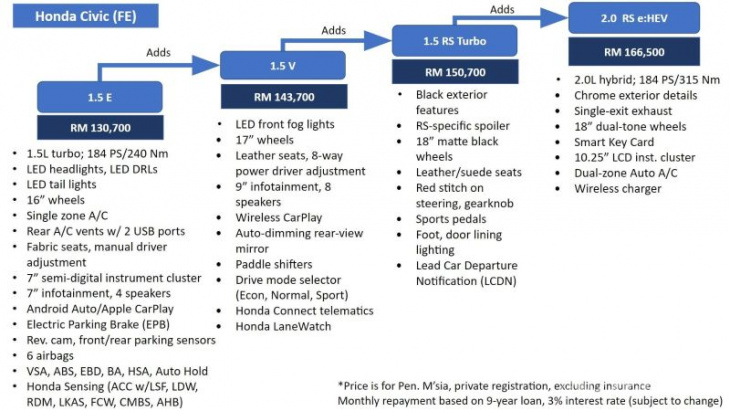 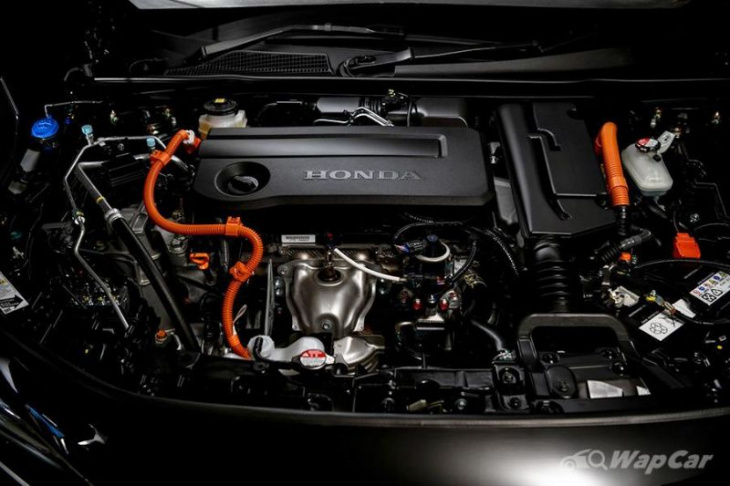 Under the hood of the Thai-spec car

Right off the bat, the biggest change is in the powertrain department.

Instead of a turbocharged engine, the Civic e:HEV RS is powered by a new naturally-aspirated 2.0-litre direct-injection Atkinson cycle petrol engine hooked up to Honda’s two-motor i-MMD petrol-electric hybrid system.

This new engine debuts in the FE4 Civic e:HEV and will be rolled out in the US-market Accord Hybrid and CR-V Hybrid. 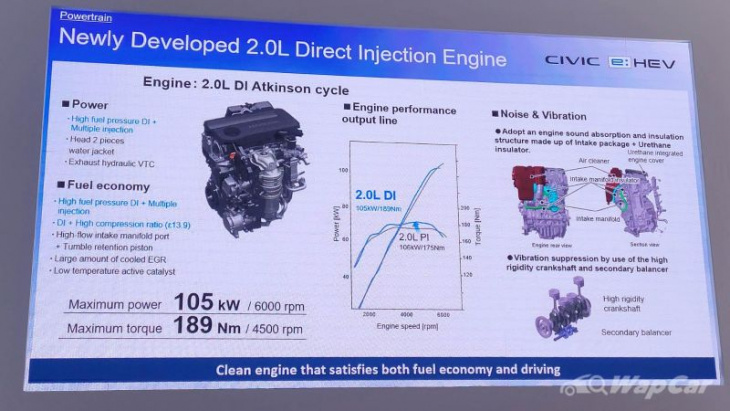 Honda says that the Civic e:HEV RS is capable of delivering 184 PS and 315 Nm, 4 PS and 75 Nm more than what the turbo Civic can muster. 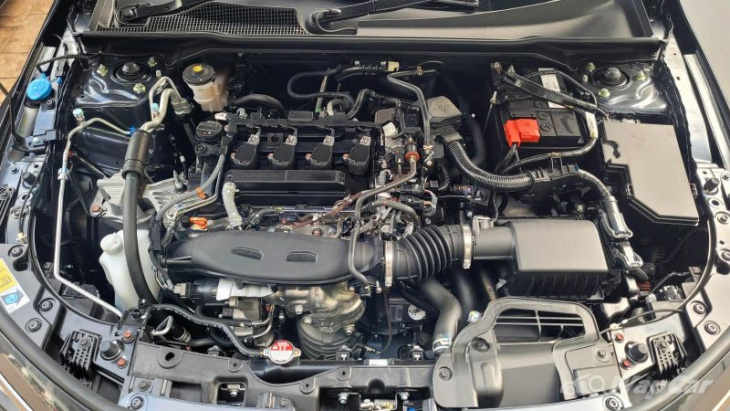 Being a hybrid, there are additional components too, like the 72-cell, 1.05-kWh Lithium-ion battery pack (Honda calls it Intelligent Power Unit (IPU)). Combined with the Power Control Unit (PCU), the Civic e:HEV RS is roughly 100 kg more than its turbocharged sibling (actual weight depends on local market specs, 83 kg for Malaysia). 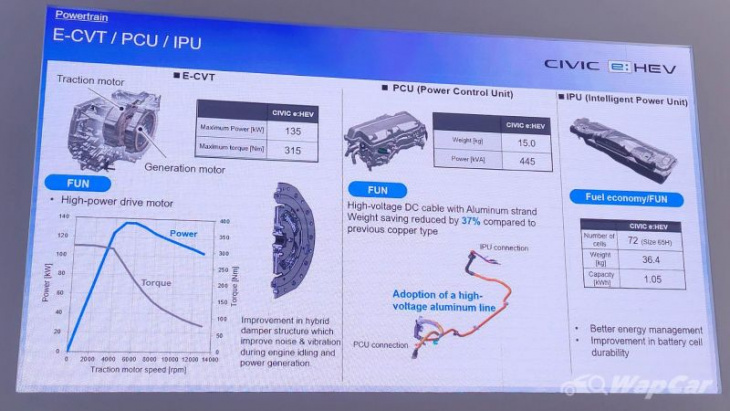 Honda has improved upon its earlier generation hybrid systems

That said, Honda paid close attention to reduce the weight gains due to the hybrid components, and part of the weight saving measures come from new aluminium strands in the high-voltage cable, which according to Honda, reduces the overall weight by about 37 percent compared to copper wires used in the past. 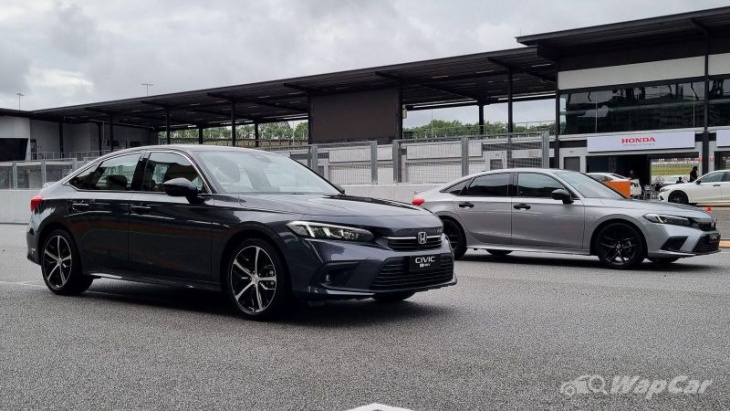 Can you tell them apart?

Honda engineers have managed develop the hybrid system in a way that weight is distributed evenly across the car (50:50) and revised the damper and spring rates to maintain the Civic’s handling prowess.

Exterior – Some subtle differences that separate it from the turbo model 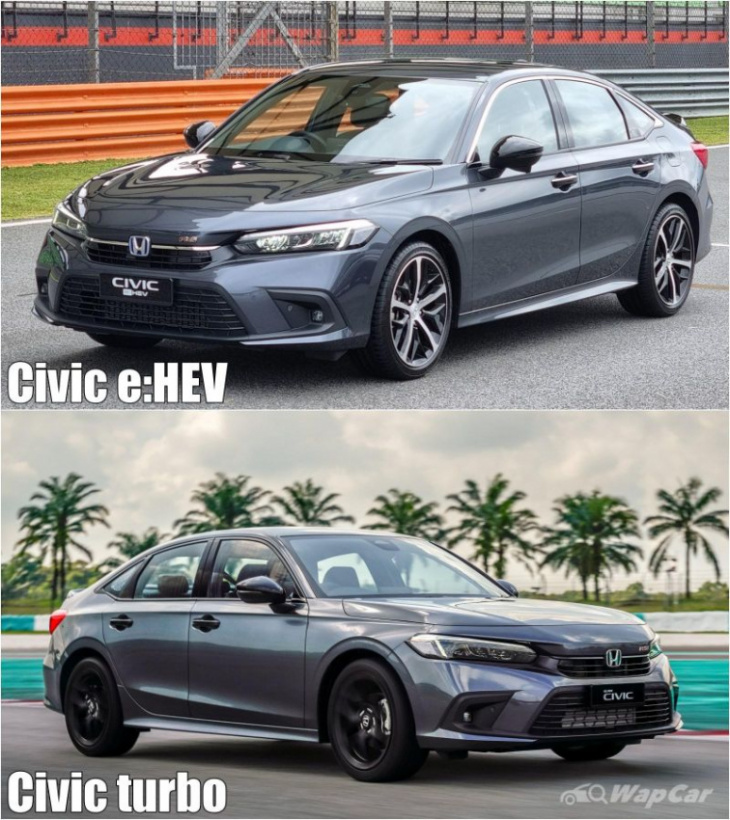 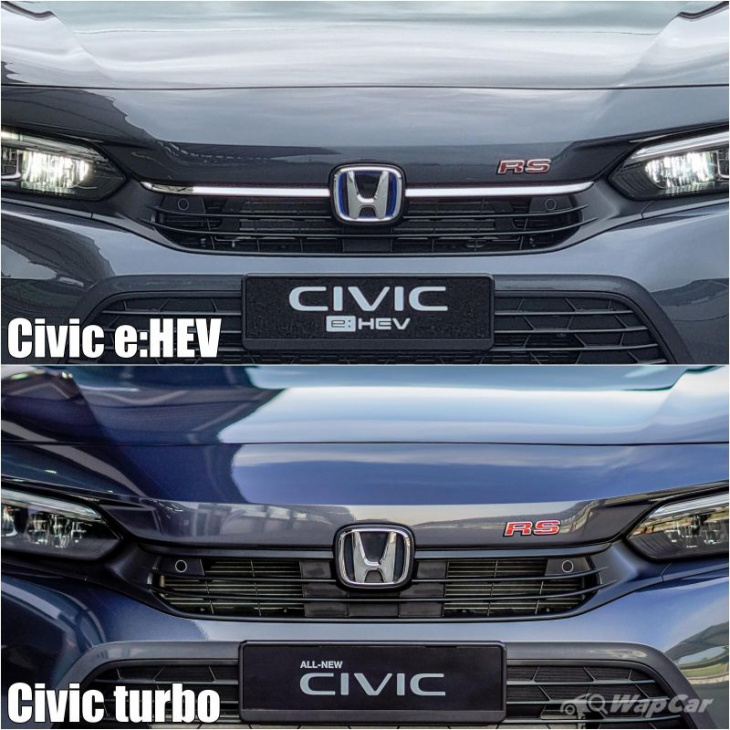 Compared to the regular non-hybrid Civic variants, the electrified Civic hybrid gains a couple of blue-tinged Honda logos, one on the front grille and the other on the boot. 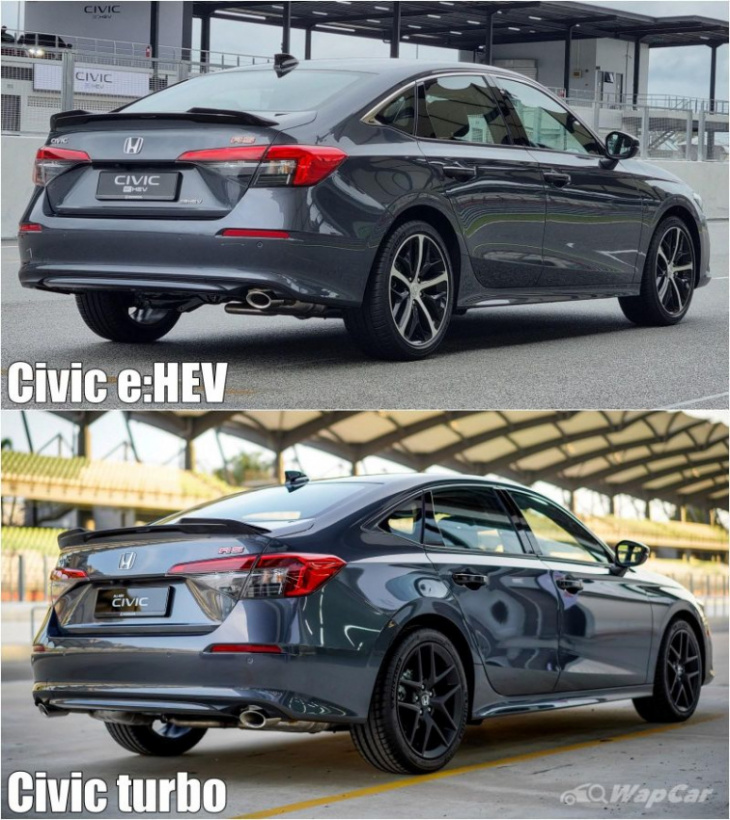 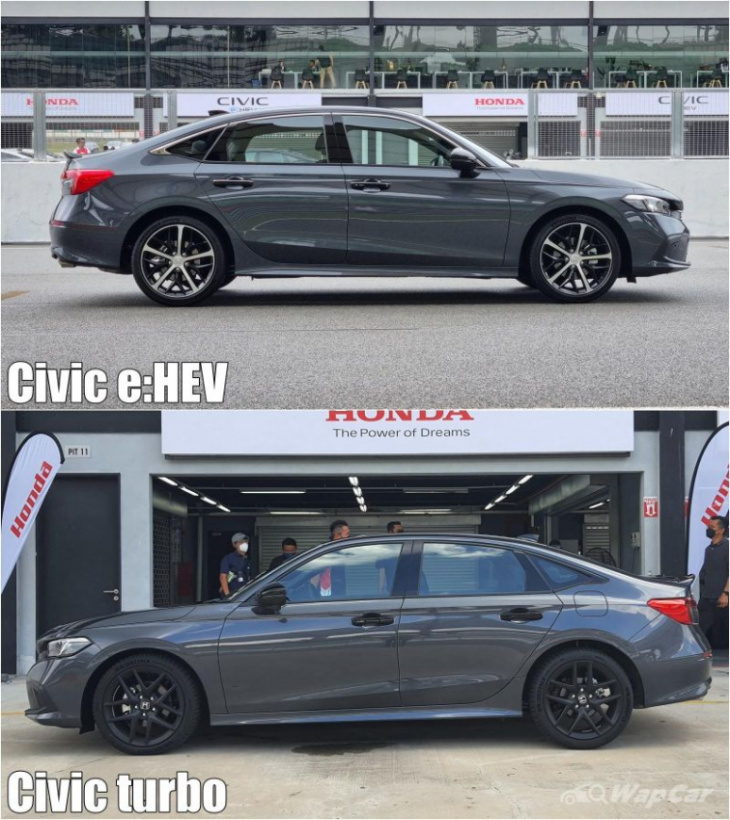 Further separating the Civic e:HEV RS from its regular turbocharged siblings are its bespoke 18-inch alloy wheels with dual-tone finishing and chrome trim on the windows, front grille, and headlights. 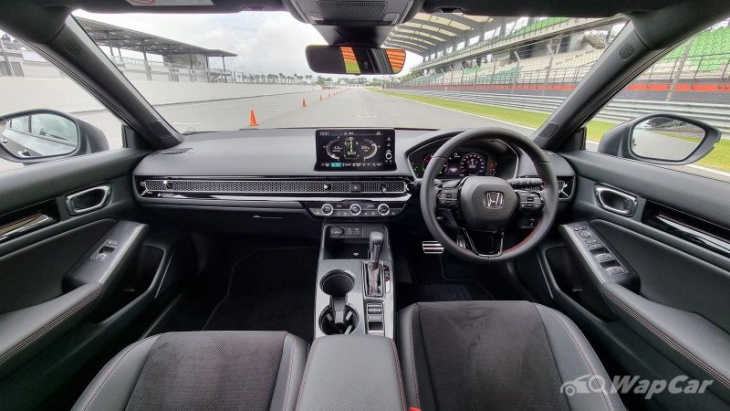 The upgrades continue inside – the electrified Civic RS gains some small-but-meaningful upgrades over the Civic turbo range. 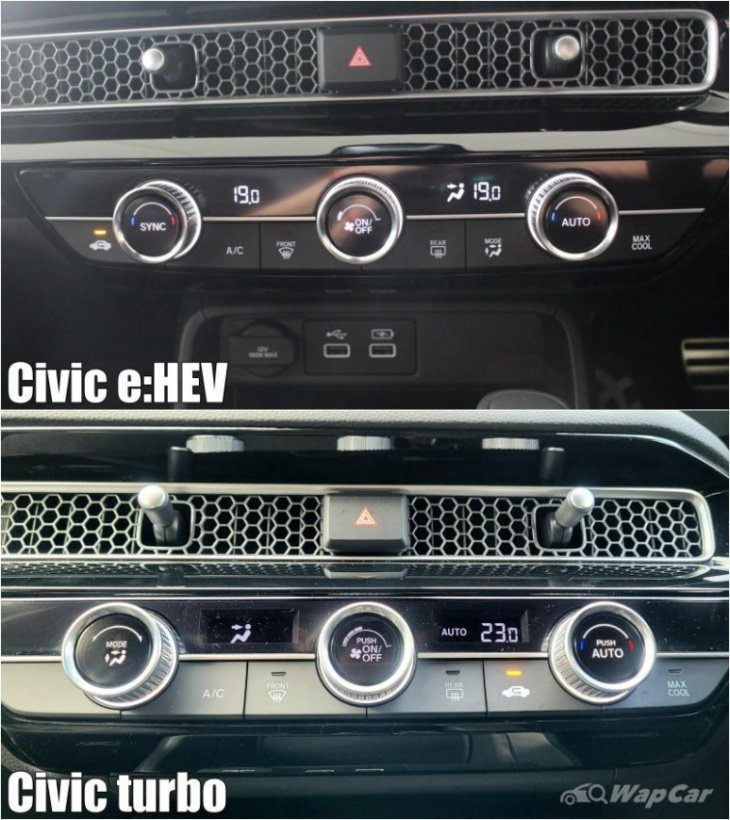 Firstly is the inclusion of the dual-zone automatic climate control system, a step-up from the single-zone setup found on the Civic turbo models. 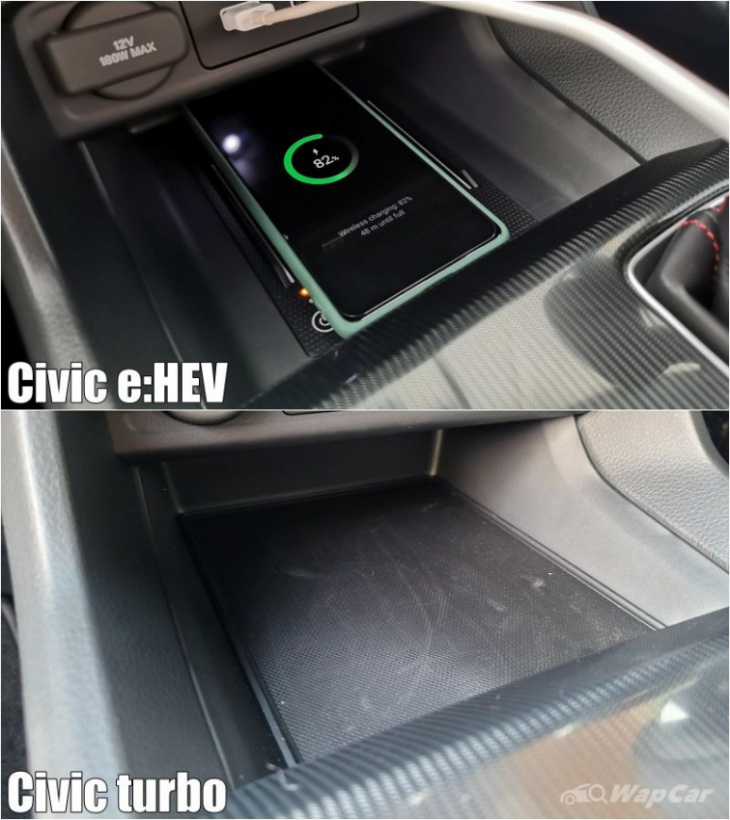 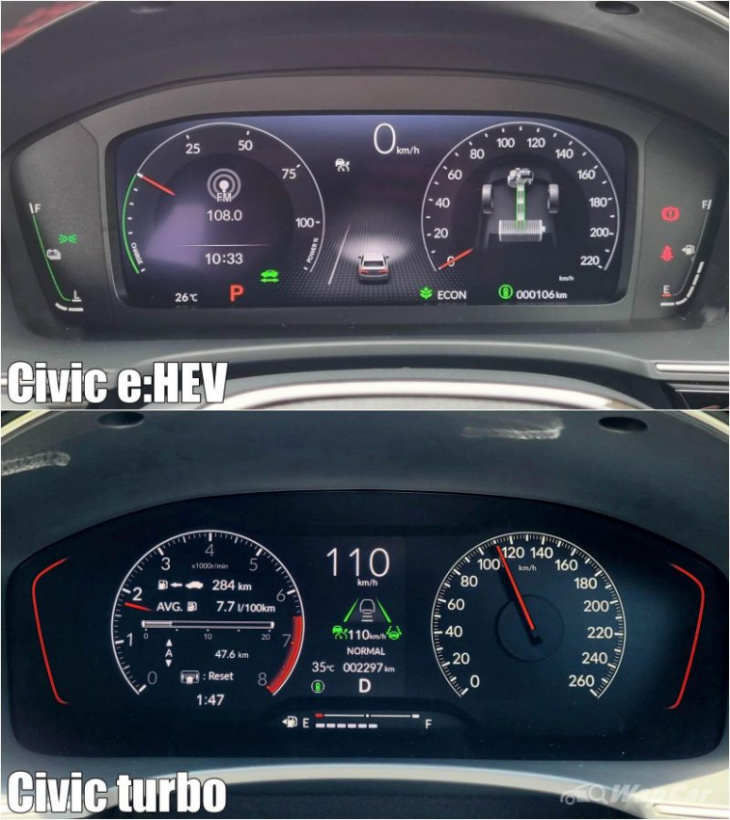 In addition to that, the Civic RS e:HEV is the only locally-assembled (CKD) variant to offer the 10.25-inch fully-digital instrument cluster. 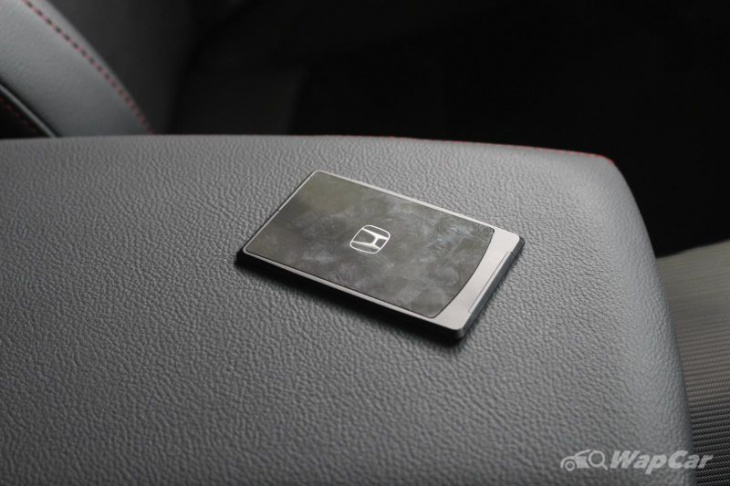 And oh, the Civic e:HEV also gets the minimalist Key Card instead of a regular key fob. 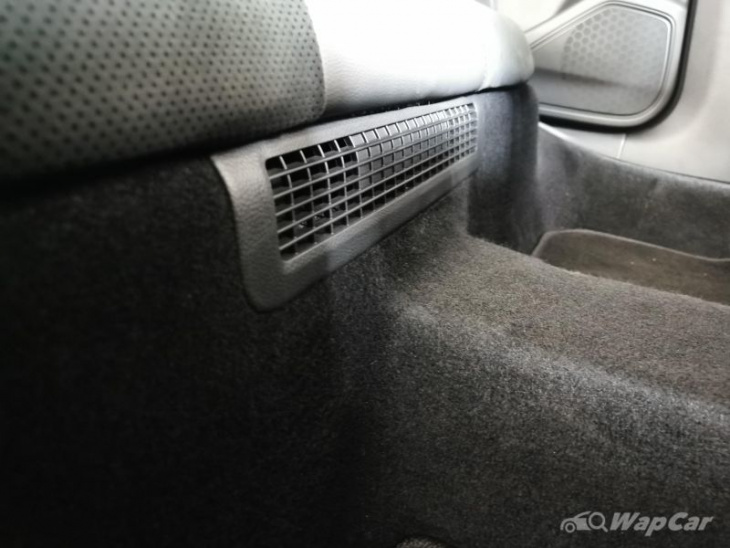 In order to keep the battery pack (IPU) sufficiently cooled, the Civic hybrid also features air vents at the rear, specifically under the passenger seat.

Safety – Still the leader in its segment 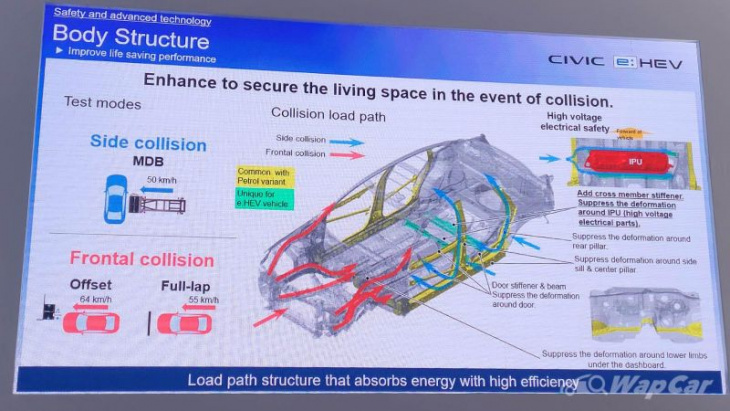 Honda does not compromise with safety in their cars and the Civic RS e:HEV is one such example.

This C-segment sedan is filled to the brim with safety features, including the Honda Sensing ADAS suite, Honda LaneWatch camera, and 6 airbags.

Conclusion – It’s like having your cake and eating it For the additional RM 15,700 over the regular petrol Civic, the electrified Civic RS e:HEV certainly adds a lot of features to its arsenal.

After all, it addresses a lot of shortcomings of the regular Civic, such as the single-zone air-conditioning, lack of wireless charger, and semi-digital instrument cluster.

And with power output that betters the turbocharged Civic, coupled a claimed fuel consumption of 4.0-litre/100 km, you certainly can have the best of both worlds, making it our recommendation if you’re shopping for a Civic.

Keyword: 2022 Honda Civic: Hybrid vs turbo, which is the better option?