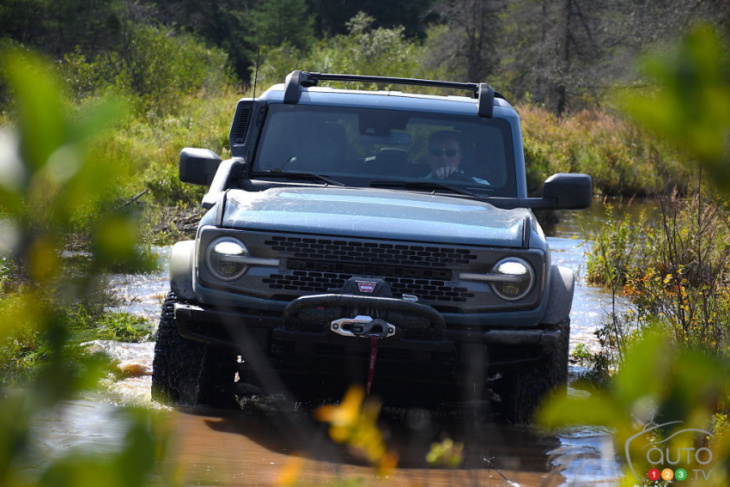 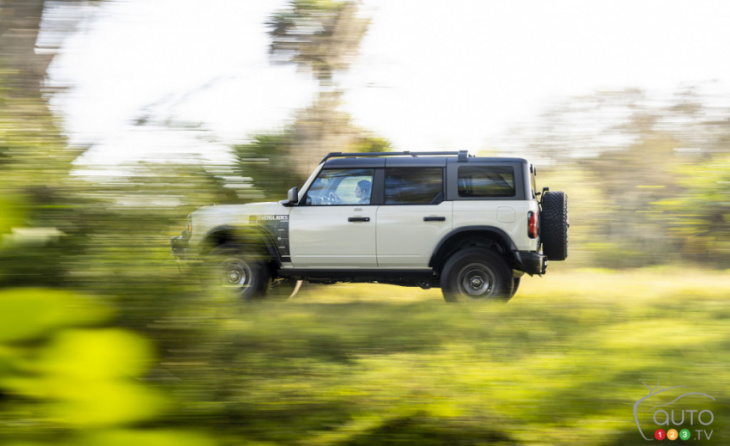 It’s unofficial Bronco week at Auto123, as we review three different versions of the popular reborn SUV, including two brand-new variants! Today, we report on our first test drive of the 2022 Ford Bronco Everglades. Tomorrow, we wrangle with the Raptor, and on Wednesday, we hop into the 2-door Wildtrak version. Buckle up!

Saint John, New Brunswick – Conceptually, the Ford Bronco is a masterstroke. Brilliant stuff. The retro styling, the range, the off-road capabilities, the available accessories, the possible configurations – everything is spot on.

What isn't is the execution. To date, the Bronco 2.0 is one of those models that has tripped and stumbled its way into the market. Sales have been strong, but there have been several recalls already. And there’s no blaming the pandemic -it can't be held responsible for design flaws and poor build quality.

In fact, Ford's problem runs deeper than that and the company will have to fix what ails it, and do it sooner rather than later because the blunders are piling up at an alarming rate.

So there you have it. If you’re thinking of getting a Bronco, be aware. 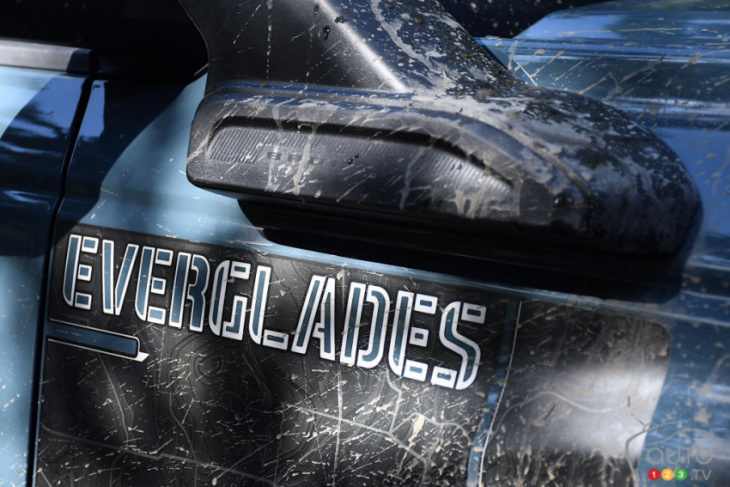 Now, let's focus on the good news, which in this case involves the addition of two new variants to the lineup. That, by the way, brings the total to eight, not including the Sasquatch package, which has the potential to transform a model's DNA. To refresh your memory, the family portrait includes the base Bronco, Big Bend, Black Diamond, Outerbacks, Badlands and Wildtrack, as well as the new Everglades and Raptor offerings. (We’re not counting here the legacy editions added for 2023).

We recently headed for New Brunswick to test the newbies out. Considering that we're dealing with two quite different creatures, we’re dealing with them separately. Today, the Everglades slips and slides into the spotlight.

The base
The new Everglades is based on the Black Diamond model. It comes standard with the G.O.A.T. (Go Over Any Terrain) terrain management system, 17-inch wheels with 32-inch off-road tires, skid plates, rubberized floor with drainage plugs, military-grade vinyl seats, and three tow hooks – two in the front and one in the back.

You’ll be glad to know that the Everglades model comes standard with both of these packages. It then adds the seven-mode version of the G.O.A.T. system, WARN winch, 35-inch mud tires, a stronger modular front bumper, washable floor, snorkel and unique sidewall graphics.

No doubt about it, the end result is interesting and attractive. 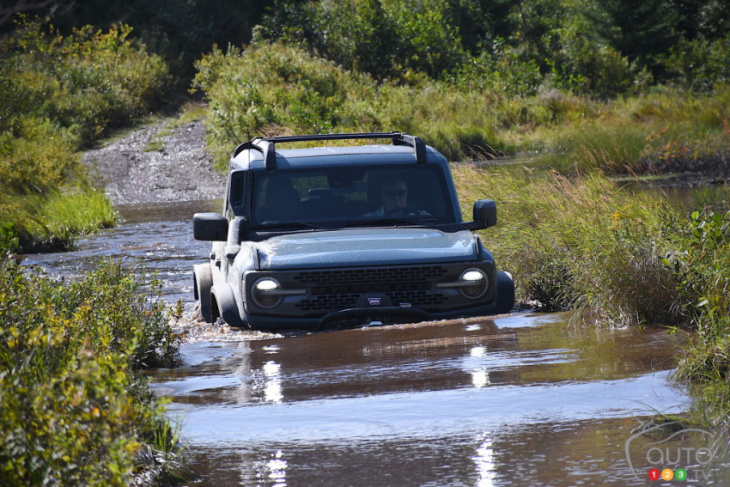 Specific tools
The Everglades version is immediately recognizable thanks to two elements that are impossible to miss: the winch and the snorkel. And both of those, obviously, hint pretty broadly at the model’s mission in life.

First, Ford has included a WARN winch with a capacity of 10,000 lb, so it should stand hold up in rough off-road conditions. Many tests were conducted to validate its effectiveness and durability, including crash scenarios. Of course, we were given a demonstration, with a mud-stuck Bronco being pulled out of its position. In this place, in this context, we weren’t expecting it to fail, obviously.

To prove the snorkel’s worth, of course, what else but a drive through water high enough that the engine can’t breathe via its natural air supply. What’s interesting here is that an additional nostril has been designed with two interchangeable openings – one in front, the other behind. The plates that each contains are of different design. The first one, regular, is made of slats and lets pass what we could call pure air. The second one is grilled. So, if you’re in a place where debris could get into the snorkel, this second opening acts as a filter to ensure that only air gets to the engine.

Continue to next page

Where Does the 2023 Ford Bronco Sport Fit in Its Vehicle Segment?