Finalised UK specs including power, availability and price to be confirmed November 30 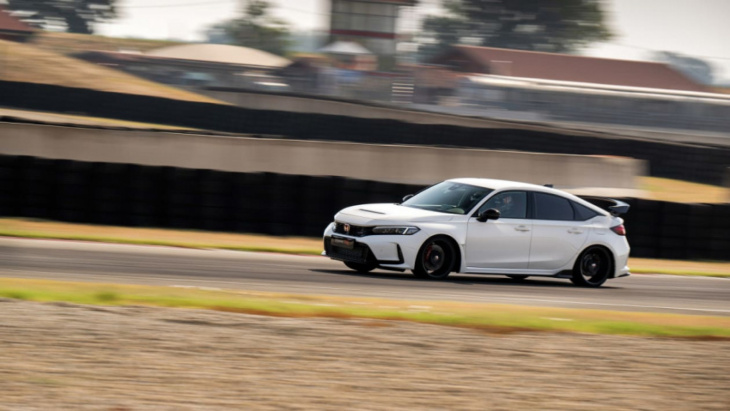 Honda will reveal full UK specifications of its new FL5 Civic Type R on November 30, putting to rest the unconfirmed figures that have been circulating based on other international markets. What we can gather from the information released so far is that the new Civic Type R will very likely have a higher price tag than before, not just reflecting the market and inflation, but also the fact it's now built in Japan, rather than Honda's shuttered UK factory.

Of course, it's very likely that it'll be worth both the wait and the higher price tag, because the new FL5 is already promising to combine the best elements of the previous FK8 with the solid foundations of the latest Civic, which we've already been impressed by – even in its pedestrian hybrid form.

So far, Honda has only announced power figures for the US and Australian-market models, with 315bhp at 6200rpm and 310lb ft of torque between 2600 and 4000rpm. This power figure are expected to grow by 10bhp for EU and JDM models according to a leaked Japanese brochure, a variance that was also the case with the previous FK8 due to environmental factors around both heat management and the lower-quality fuels used in both markets.

Power is generated from the same turbocharged KC201 1996cc four-cylinder engine with VTEC and double overhead cams. There has been some detail change, such as the use of a new crankshaft that's both lighter and stronger, and there's a new turbo that's more responsive than before thanks to the use of low-inertia elements including the turbine wheel. 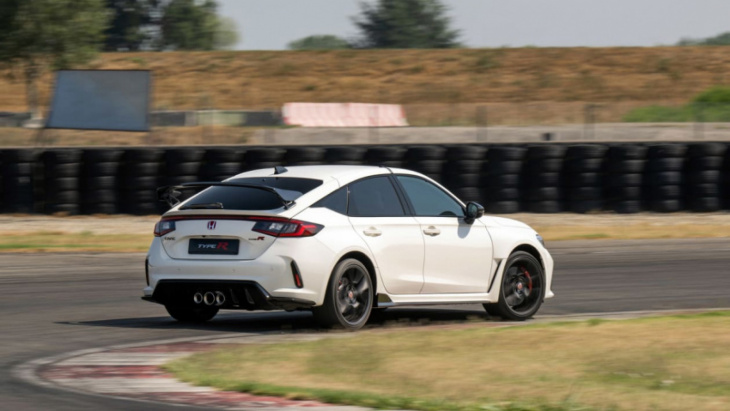 The engine’s connected exclusively to a six-speed manual transmission with the typical solid aluminium gear knob. Power goes through the front wheels via a limited slip differential.

Other elements around the chassis and suspension have also been uprated, Honda's confirmed a 38 percent increase in structural rigidity thanks in part to the use of 4 times more structural adhesive in the chassis construction. The basic suspension layout is the same – a dual-axis front suspension and multi-link rear – but the front axle assembly itself is now revised, with detail changes to the wheel hubs, damper fork and lower arms. The result is a 16 percent increase in camber stiffness.

The Type R has also now been engineered to run on Michelin Pilot Sport 4S rubber, which are now an inch smaller than before, wrapped around lighter forged 19-inch wheels. Honda's not released a weight figure, but insists it's around the same as the 1390kg FK8. US models also feature an even lighter forged wheel option for an extra $3100. It's not yet known whether other markets will also have this option. 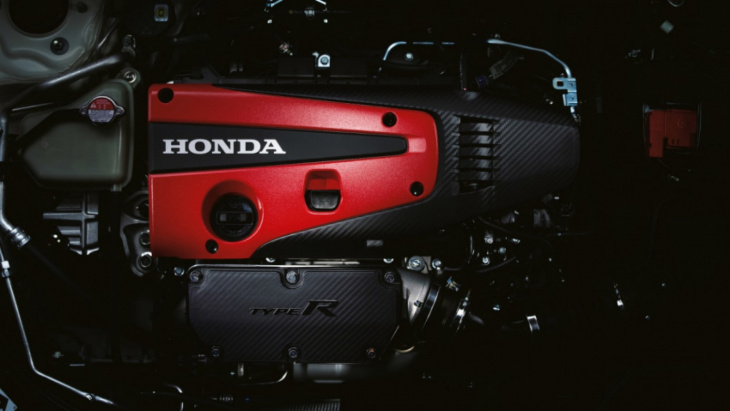 The new Civic Type R’s overall proportions are based on the 11th generation Civic, which is already both longer and wider than a majority of its rivals, but there are even wider tracks front and rear. This has necessitated 90mm wider arches, which unlike the FK8’s are seamlessly integrated into the overall design. The front and rear bumpers, bonnet, front wings and side skirts are all unique, but a much more substantial change is the all-new side pressing and rear doors that are also bespoke to the Type R – at a big financial cost.

The body’s design has been toned down compared to the previous Type R’s, and now sits in-line with the standard Civic’s more grown up aesthetic. This has been combined with a various elements brought across from the FK8, though, including a high-mounted rear wing, triple exhaust outlets and those smaller 19-inch wheels. 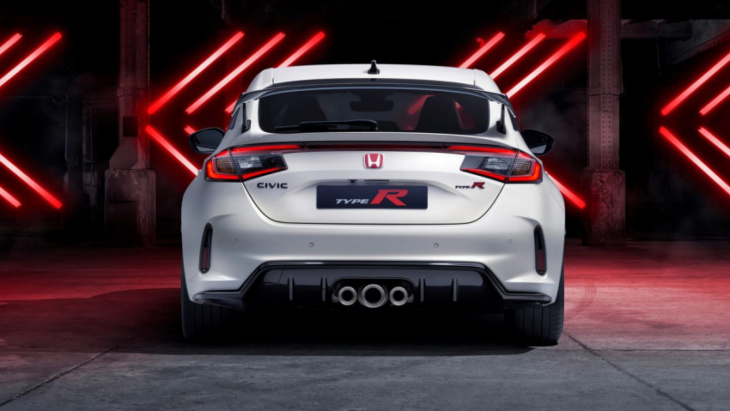 Behind the new wheels and tyres are a substantial set of four-piston Brembo brake calipers that are carried over from the current car, with an emphasis on improving the FK8's already superb brake feel.

Honda has also confirmed that it’s finally introduced an Individual driving mode alongside the existing Normal, Sport and +R modes that will allow the driver to mix and match elements of the powertrain and chassis to their desired combination. This was a major annoyance on the FK8, and is a welcome addition to the new model. 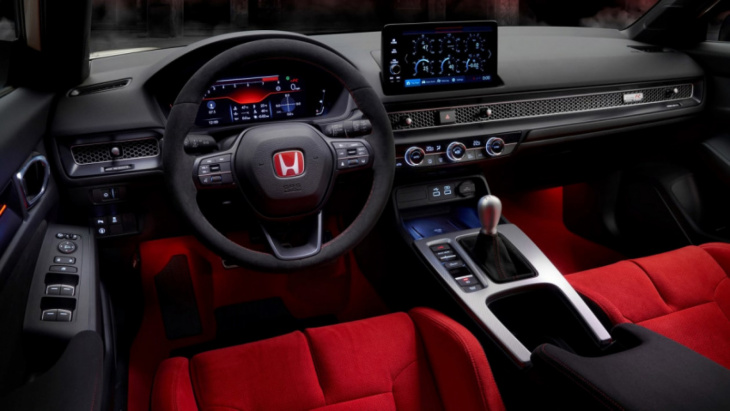 The interior represents a significant step up in both quality and interface. Gone is the current Type R’s complex aesthetic of angular plastics, in its place a far more restrained and resolved design with a single horizontal air vent dominating the dash. The new high-mounted screen is clearer and larger, while the standard Civic’s semi-digital instrument cluster has been replaced with a new fully-digital cluster that will have bespoke Type R configurations.

Typical Type R elements like the bright-red Alcantara bucket seats, red carpets, Alcantara steering wheel and that aluminium gear knob are all present, only now incorporated into a far more contemporary and, what looks to be, well-built interior. 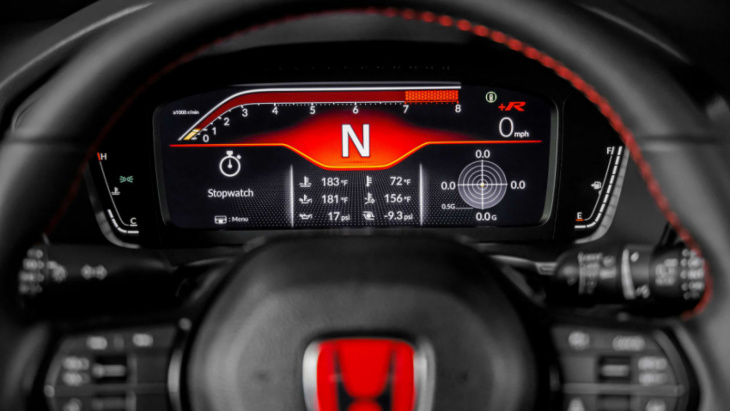 Yet even before its market release, the new Civic Type R is already breaking lap records as its predecessors did, having taken the front-wheel drive record at Suzuka Circuit with a time of 2:23.120 seconds. That’s 0.873 seconds faster than the previous generation Type R Limited Edition. Yet its biggest triumph against the stopwatch is likely still to come, with Honda confirming that it'll be gunning for the big one – the Nürburgring Nordschleife – a front-wheel drive lap record claimed by the FK8, until it was beaten by the Renault Megane RS Trophy-R with a time of 7:40.1.

Despite not being allowed to know critical information like brake horsepower or kerb weights, we were granted a passenger lap around the Nuvolari Circuit in Northern Italy with Honda's WTCR drivers at the wheel. While there's very little we can really learn from the passenger seat, it did go some way to confirm that the new FL5 will be a shaper, faster and more track-resilient hot hatchback.

Despite the moderate PS4 S rubber, lateral grip was very impressive, and while it didn't feel any faster in isolation than the previous car, there was definitely a small improvement in every aspect of on-track driving. What was also revealed is the first inkling of its chassis balance, with a very neutral stance on turn in, even coming with a hint of oversteer. Mid-way through the corner the car was pinned to its line, with exceptional traction on the way out of slower corners.

So while this tells us nothing about its driver engagement, its objective performance is certainly something to get excited about. Will the new Civic Type R pick up where the last one left off in being the best hot hatchback of its generation? Things are definitely pointing in the right direction.