The new BYD Atto 3 is an electric SUV that focuses on technology and premium interior quality. Due to arrive in the UK in late 2022, we've had a preview to see what it's like... While electric SUVs are nothing new (rather far from it), the Atto 3 is one from a brand you’re likely to be unaware of – and this model is coming to the UK before the end of this year.

For some background, BYD is a Chinese company that was founded in 1995 as a battery manufacturer, and since then has grown to a massive scale, building products such as buses, forklifts and cars. So far, the brand hasn’t made any impact in the UK with the latter, though.

The Atto 3 aims to change that. It will be offered solely as an electric car with family SUV proportions, and it features a 60.5kWh (usable) battery and an official WLTP combined range of 261 miles. With a maximum charging rate of 88kW, the battery can be charged up from 30-80% in 29mins. For reference, the the 58kWh (usable) battery in the Volkswagen ID 3 has a higher maximum charging rate of 100kW, charging from 10-80% in just over 30mins.

While the Atto 3 has been designed with Europe and the UK in mind, where it fits into the market depends on its pricing, which is yet to be confirmed, and we’re told the Atto 3 won’t be a budget option in the same way the MG ZS EV is. However, we expect the Atto 3 to compete with the Volkswagen ID 3, sitting below pricier models such as the Audi Q4 e-tron. 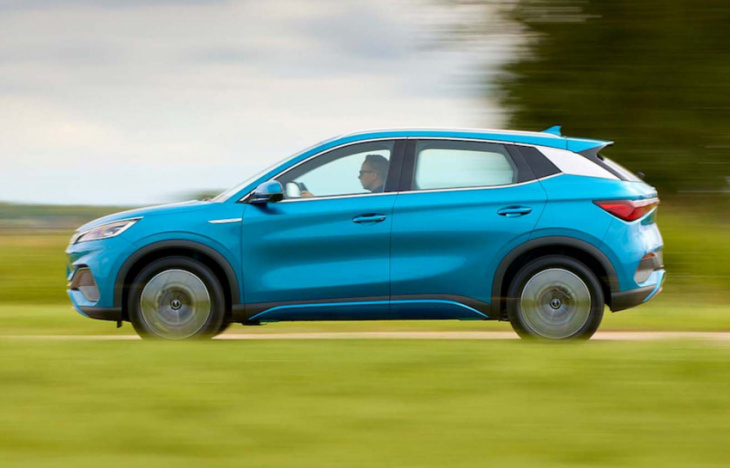 So far, we’ve only driven the Atto 3 in left-hand-drive (European spec) configuration, on a closed 2.8-mile circuit. With 201bhp and a 0-60mph time of 7.3sec, it doesn’t leave you wanting for a lot more performance. Yes, the Cupra Born and VW ID.3 feel stronger when setting off from stationary and will pin you back into your seat more, but the Atto does build up pace quickly when you’re on the move. Unlike those two rivals, the Atto 3’s motor powers its front wheels rather than the rears, so we suspect the power is metered in an effort to prevent wheelspin. If so, it does a good job. 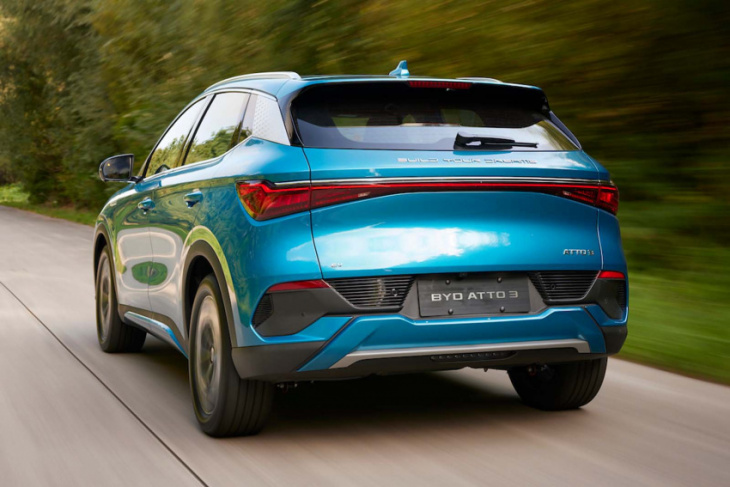 Handling wise, the Atto 3 isn’t a sports SUV, but nor does it try to be. While it has nicely weighted – if not super direct – steering, the emphasis is clearly placed on comfort. The ride does a good job of soaking up imperfections, with the side effect being some body roll through corners. Neither wind and road noise proved an issue on our short drive.

The designers of the Atto 3’s interior have certainly not held back. The dashboard has a swooping look to it and the door handles, for example, are levers that wrap around the speakers.

A 12.8in touchscreen display takes centre stage, with the ability to rotate being a notable innovation. It means you can set the screen to landscape for your sat-nav functionality or portrait for Spotify, or if you simply prefer the smartphone look.

While we’re yet to explore all the infotainment’s functions, the screen itself is clear, crisp and responsive. We were impressed after just a few taps and swipes.

While some cars employ netting for storage pockets on the doors, the Atto 3 uses three elastic strings that are tuned like those on a guitar. No, seriously. You can play Deep Purple’s Smoke on the Water on them, albeit a rough version.

BYD claim to be generous when it comes to standard kit, so a panoramic roof will come as standard, as will a heat pump to help with range in colder weather.

The majority of materials in the Atto 3’s interior feel of a premium quality, particularly the vegan leather. It’s only at the bottom of the doors and centre console that you’ll find some noticeable, scratchy plastics. 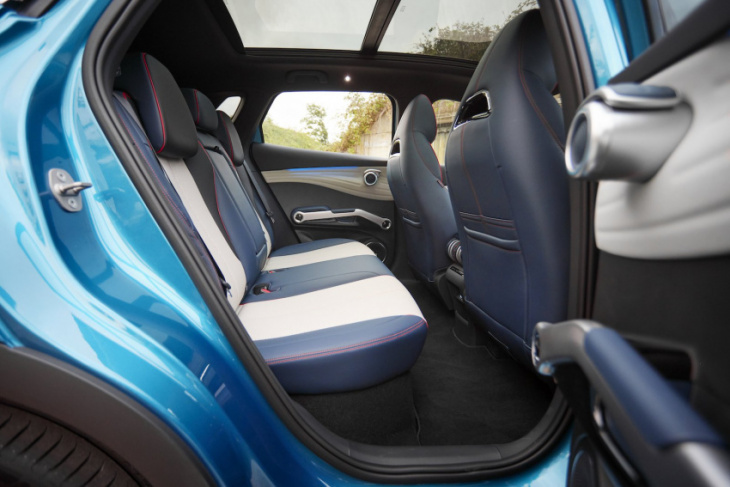 The interior feels light and airy, thanks in part to the aforementioned sunroof, and front seat occupants are given a good amount of room. So are rear-seat occupants; adults of average height will find leg and head room to spare. We haven’t tested how comfortably three can sit side by side, but the Atto 3’s flat floor will ensure that the middle-seat passenger has somewhere for their feet.

As you can tell, practicality is good enough for families and this theme continues with boot space, where there is 440 litres on offer. That’s more than an ID 3 can offer, and it matches the Renault Megane E-Tech’s amount.