The BMW M4 is only the third model in the car maker's history to wear the coveted CSL badge. Can it live up to the weight of expectation?... 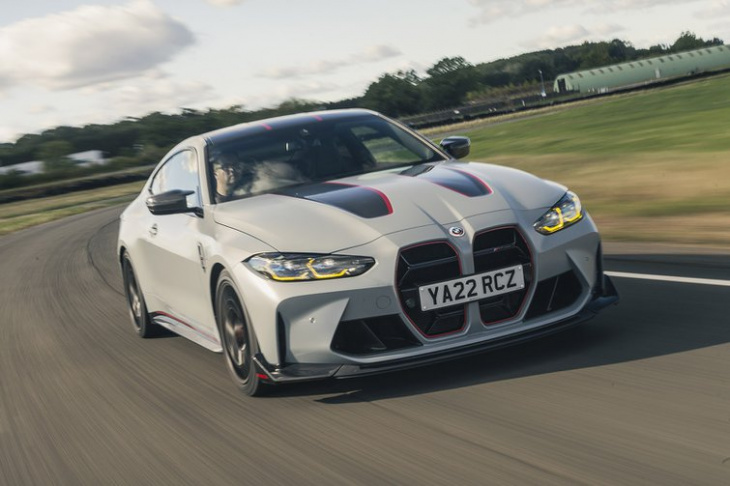 Is there a more evocative acronym in all of motoring than CSL? Short for Coupé Sport Lightweight, up until now, the badge has only been used twice, first appearing on the iconic E9 3.0 CSL back in 1972. Nicknamed ‘Batmobile’ after its extreme aerodynamic package, the car was a homologation special, designed to allow BMW to compete in the European Touring Car Championship. It went on to win six championships in the Seventies, and helped establish the M brand, so it’s fair to say that the 3.0 CSL was an era-defining motor car.

We then had to wait just over 30 years before the badge was rolled out once again for a special lightweight edition of the BMW E46 M3 – a car that, in standard form, won our Coupe of the Year award four years in a row. With a carbon roof (the first production car to feature such tech), thinner glass and body panels that used a mixture of carbon-fibre-reinforced plastic, it weighed a whopping 110kg less than the regular M3. The result was the finest handling M3 to date, and even today it’s hailed by enthusiasts (us included) as one of the best M cars ever produced. 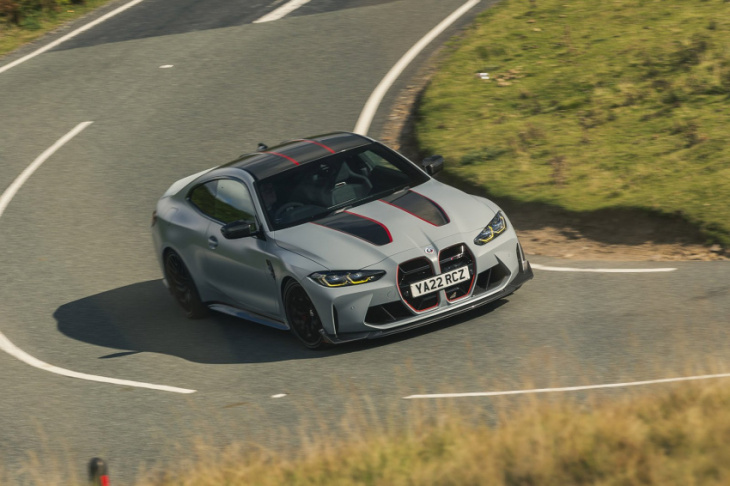 Which brings us to the car you see before you – the all-new M4 CSL. As CSL tradition dictates, weight-loss has been the aim of the game, and BMW has stripped around 100kg from the regular BMW M4 to create this special edition. This is now a two-seat M4, with the removal of the rear seats saving 21kg, lighter carbon front bucket seats eliminating another 24kg and new wheels, ceramic brakes and suspension saving an extra 21kg. Sound insulation has been ripped out (that saves 15kg), while a titanium exhaust cuts 4.3kg from the overall weight. Even the grille is 500g lighter thanks to the removal of the cross section bars.

It does seem strange, though, that despite this obsessive attention to weight-saving, BMW has decided not to remove luxuries such as the heavy infotainment system and wireless phone-charging pad. After all, with a kerb weight of 1,625kg total, this might be a lighter version of an M4, but it’s far from a light car in general – for reference, the current Porsche 911 GT3 is more than 200kg lighter. 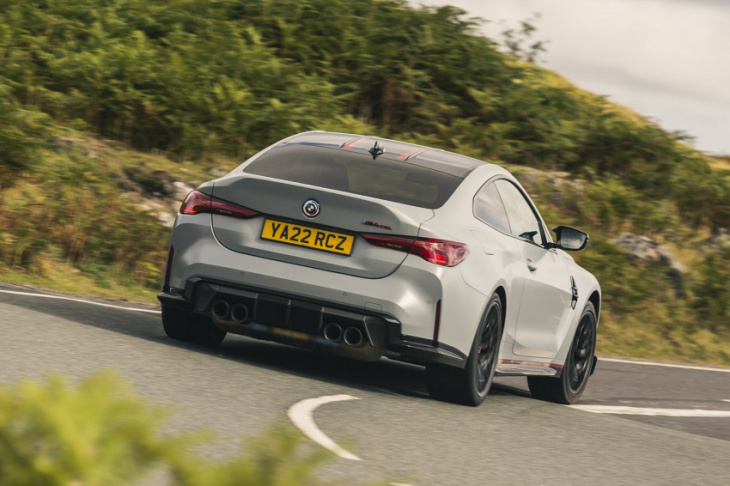 But that, of course, is not the whole story. Even if we put the weight-saving details to one side, BMW has made significant changes to the platform. Not only does the CSL get bespoke suspension, but there are also new anti-roll bars, and the frame of the car has been made significantly stiffer. These changes, combined with the standard-fit track-focused Michelin Cup 2R tyres means the M4 CSL is now the fastest track car BMW has ever built, having turned in a 7m 16sec lap time at the Nürburgring.

The twin-turbocharged, six-cylinder engine, meanwhile, gets minor tweaks so that it now produces an extra 39bhp, taking the total output to 542bhp. With drive going to the rear wheels only (if you want an all-wheel drive M4, stick with the regular version) the 0-62mph is an impressive, if not quite mind-bending, 3.7sec.

Like a good book, a special edition M car needs to hook you from the get go and the M4 CSL certainly delivers. When you thumb the bright red starter button on the carbon-fibre wrapped centre console, the six-cylinder engine bursts into life with a hard-edged metallic rasp that’s missing from the regular M4. And with its interior shorn of any sound insulation, every unsavoury sound – from the crackling of stones tapping the rear wheel arches to the chafing of the carbon-ceramic brakes – makes its way into the car.

Usually we would mark a car down for such lack of refinement, but in a performance-focused model, it simply adds to the experience. You can hear the whooshes and chuffs of the turbochargers under acceleration, while the titanium exhaust creates a loud, crackling exhaust note when you back off the accelerator. It’s a more exciting and authentic sound than the speaker-enhanced drone of a standard M4. 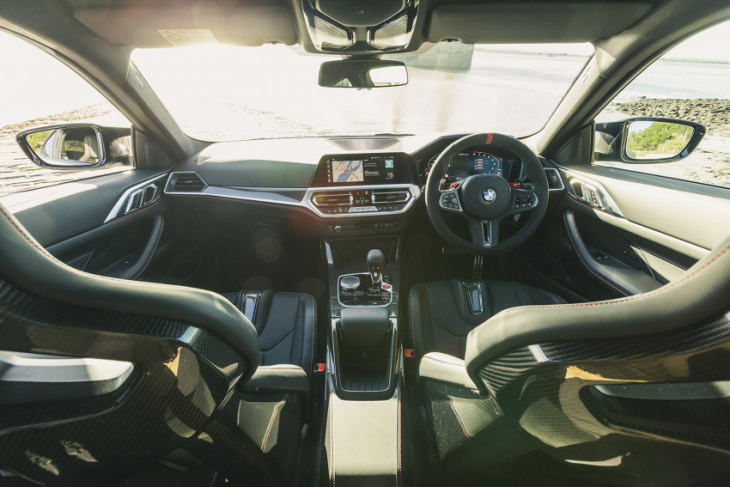 The engine feels stronger than in the regular model, too, but it’s very similar in character and delivery – that’s to say it has sharp accelerator response and sings to the redline so rapidly and with so little vibration that its all too easy to bash into the 8100rpm rev limiter before you have the chance to grab the next gear. And while the use of an automatic gearbox means shifts don’t come as quickly or with the clarity of the best double-clutch ‘boxes, the shift speeds are far from ponderous – using launch control we managed to fire off a 0-60mph time of 3.6 seconds.

On the road, you have to treat the track-focused Cup 2R tyres with respect when they haven’t got heat in them, but on a summer’s day it’s surprising just how easy it is to get them up to temperature – a process that’s helped by BMW’s truly magical 10-stage traction control system. We found that setting three was perfect for the road, with the system allowing for enough slip to ensure you never bog down when driving hard out of a corner, but giving you enough support that you always feel as though there’s a safety net to catch you if things get out of hand. 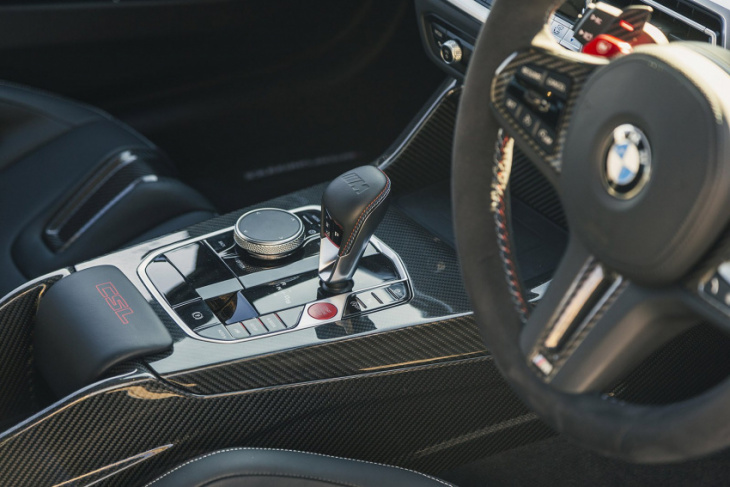 Speaking of control, we took the car to our private test track (where the standard M4 holds the current lap record) and were simply blown away by how much speed it’s possible to carry through high-speed corners. The front end responds instantaneously to steering inputs (the steering itself also feeling much more communicative than it does in the standard car) and it holds a line with such resilience that you can place the car exactly where you want it.

And despite having more power to put through the rear wheels than the regular M4, the CSL never feels overwhelmed – it simply hooks up and smears the sticky Michelins into the tarmac.

But we reckon the most impressive characteristic of the CSL is not its raw pace. Oh no. More bewildering is that this capable track car feels just at home on a road. Knock the suspension down from Sport Plus to Sport and you’ll find a car that’s capable of shrugging off battered British B-roads without a sweat. And while it does occasionally get distracted by big cambers, you’re never left fighting it in the way you sometimes have to in the 911 GT3.

At a cruise, it’s sufficiently habitable that you wouldn’t mind doing a decent motorway journey to reach a track day. At 70mph we recorded a measurement of 71.1dB, which is similar to the level of road noise you would find the Honda Civic Type R and Toyota GR Yaris.

If you currently own an M4 and you’re looking to upgrade to the CSL, you might be a little disappointed to find that the interior has only received small changes. You’ll find a touch more Alcantara and carbon-fibre, but that’s about it. 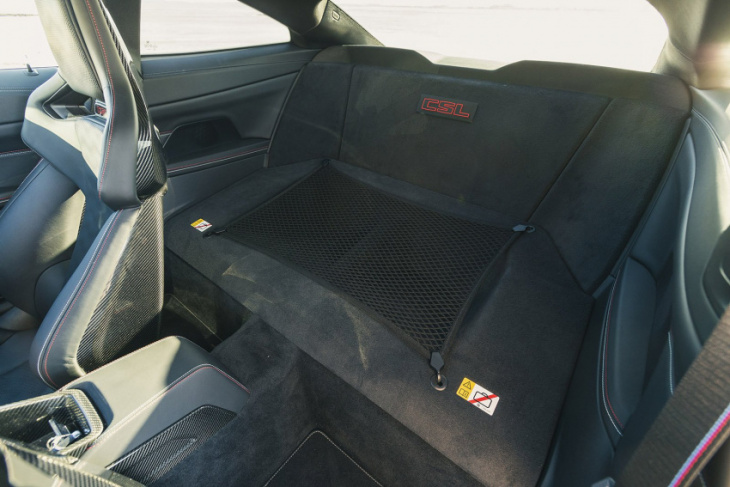 The single biggest change (aside from the removal of the rear seats) is the slimmed-down centre console that no longer has an arm rest or a cover for the wireless phone-charging pad. Considering that the charging pad and infotainment system remains, we would happily put up with an extra kilogram to have a place to rest our left arm.

As standard, the CSL comes with bespoke carbon-backed bucket seats that are manually adjustable and feature a removable head cushion to make wearing a helmet easier. Sadly, our press car didn’t come with these (instead we had the optional electrically adjustable carbon-backed seats that are also available on the regular M4). Considering the ethos of the car, we’d be tempted to stick with the ‘regular’ pews.

Everything you need to know about the BMW M4 Competition