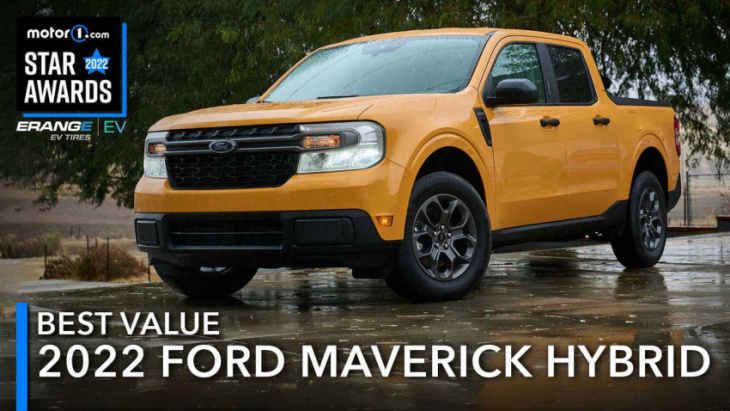 The average price of a new car in the US rose to just over $48,000 this year – about $5,000 more than the average was in 2021. That’s a lot of money to spend on a new car, and it means finding something reasonably affordable these days is that much more challenging. But there’s still value out there if you know where to look.

For our Motor1.com Star Award for Best Value, we found sedans, SUVs, and even a truck that met our standards for value. Our segment was capped at $40,000 to highlight vehicles that are largely affordable, but we also looked at total available features, amenities, driving joy, and more, to round out the value equation. Obvious contenders from Honda made the cut, with Kia, Subaru, and Ford joining the mix, and even an Acura product sneaking into the finals.

What We Look For

Price and efficiency are paramount in our Best Value award, but those are merely the most important factors, rather than the only. The winner’s interior and exterior design needs to stand out – it’s one thing to be frugal, but another to look frugal – and driving it should be a joy rather than a burden. Additional factors, such as capability, versatility, or a robust equipment roster also play a major role.

Even though it’s the priciest vehicle of the group, the Acura Integra A-Spec with the Technology package presents a stellar value for the segment. It combines a turbocharged 1.5-liter engine and excellent driving dynamics with a premium interior that trumps the next-best from Audi and BMW, while its hatchback design gives it ample cargo space and lots of passenger room, relatively speaking. But for as good as it is in the class, it’s hard to award a car that costs $37,395 as-tested – closest to the top of our budget cap – with our award for “value.”

If you want heaping helpings of performance on a budget, few cars do it better than the Honda Civic Si. Dynamic handling, a punchy turbocharged engine, and a snappy six-speed manual transmission make this car an absolute charmer in the corners. But in terms of value, the Civic Si’s sneakily high $29,190 starting price makes it almost $3,000 more than the previous model, and not a stellar value compared to some of the other hot sedans and hatchbacks it competes against.

As a staple in the compact SUV space, the Honda CR-V continues its run of success for 2023 with new styling and an upgraded interior ripe with premium materials. It’s roomy and comfortable, but the CR-V doesn’t excel in any one particular category. And that’s a problem for this EX-L trim, which starts at $36,505.

Its turbocharged 1.5-liter engine and continuously variable transmission are punchy, but hardly class leading. The pairing does little for refinement – NVH is a weak area relative to rivals in this contest – and the CR-V’s 29-mpg combined rating is the worst in this group outside the high-riding, Boxer-powered Subaru.

The Kia Sportage won our Star Award for Best SUV because it ticked all the right boxes. It’s a stylish, relatively sporty, and spacious compact that seamlessly blends a turbocharged engine with a hybrid battery pack, giving it up to 38 miles per gallon with all-wheel drive (as tested). That said, the SUV space is so crowded with more affordable – and still very good – alternatives that the Sportage falls somewhere to the middle of the pack in terms of true value.

Funky and fun, the Subaru Forester Wilderness actually brings a lot to the table as far as value goes. As one of the most capable compact off-roaders, the Forester offers 9.2 inches of ground clearance, rugged cladding, and standard all-wheel drive for only slightly more than a new CR-V. The Forester Wilderness ended up being close to one of our top picks for value, but the droning transmission and torque-light powertrain held it back here as it did for Best SUV.

With a starting price of $21,490, not only is the Ford Maverick the cheapest truck in America, but it’s also one of the most affordable new vehicles in the country – full stop. At that price, you get a 54.4-inch bed and a basic but rugged interior, while the hybrid model nets you up to 37 miles per gallon combined. You will have to sacrifice all-wheel drive, but it’s all in the name of efficiency.

Even though the Maverick wasn’t our top pick for Best Truck due to its pint-sized bed and limited towing abilities with the hybrid powertrain equipped, as far as a value play, the Maverick hits all the right notes. Buyers can take home the tiny truck with moderate capabilities and a lovable drive experience – or some ho-hum compact sedan with none of the above. The choice was obvious.

How We Choose Star Awards Winners

The Motor1.com Star Awards start with vehicles that received the highest Star Ratings throughout the year. Our awards consideration set starts with vehicles that are either all-new or significantly revised over the last year. From there, we invite the best vehicles to join us for a week of head-to-head testing.

During the year we let data take the lead in our rating system, but the goal of Test Week is to compare vehicles head to head – on the road, on the track, or in the dirt as the case may be – to see which competitor in each segment stands out with unmissable value, incredible technology, and impressive real-world behavior. Any vehicle invited to participate in Star Awards is excellent, but only the very best in each segment can claim the title.