The 2022 Ford Explorer is one of the market’s most popular midsize SUV options, but the segment has some intense competition. For example, the Kia Telluride is a relatively new entry into the segment, and it’s already such a good SUV that it’s won a long list of awards. That said, there are two advantages that the 2022 Ford Explorer has over the award-winning Kia Telluride.

How the 2022 Ford Explorer is similar to the Kia Telluride

These two SUVs look different on the outside but share a few similarities on the inside. According to Kelley Blue Book, both SUVs come standard with front-wheel drive, and both automakers offer all-wheel drive as an option. Both automakers also gave the two midsize SUVs three rows of seats as a standard feature.

Another area where the two are very similar is the number of standard advanced driver assistance systems (ADAS), which makes the cars safe. The vehicles use forward collision warning, automatic emergency braking, and blind-spot monitoring as standard ADAS features on both SUVs.

Lastly, the two are similar in their price points. The Telluride starts at about $33,400, while the Explorer starts at about $34,000. This makes the Kia about $600 cheaper, but Ford makes up for the difference in other ways.

The advantages the 2022 Ford Explorer has over the Kia Telluride 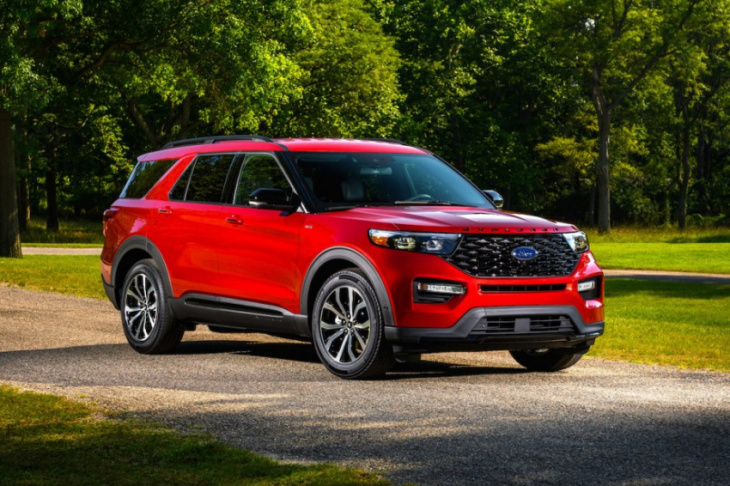 According to Kelley Blue Book, one of the Ford SUV’s advantages is variety. Kia offers four trims on the Telluride, and the top trim, the SX, costs about $45,000. Meanwhile, Ford offers at least eight different trims for the Explorer. The Detroit-based automaker offers trims that cost over $50,000, and the King Ranch trim is at the top, costing $55,000.

Ford offers many packages and options, and a fully-loaded Explorer can quickly get into the $60,000 price range. Similarly, another advantage the Explorer has comes from the engine options that Ford offers. The Kia SUV only has one engine, while Ford currently offers three. All Ford engines will have more power than the Telluride’s engine, and the engine options will provide different advantages.

For example, the American automaker offers a 3.0-liter twin-turbocharged V6 engine option. This is the performance-oriented option. It gets 400 hp, making the Explorer a fun SUV. Additionally, Ford offers a 3.3-liter V6 hybrid. This option gives the SUV a fuel economy of about 27 mpg combined, which is higher than what the Telluride gets.

The specs of these midsize SUVs

Kia gave the Telluride a 3.8-liter V6 engine, which gets 291 hp. This engine is paired with an eight-speed automatic, allowing the Kia SUV to get 23 mpg combined. In comparison, the Explorer’s standard engine will be more powerful and economical than the Kia’s. Ford gave the Explorer a 2.3-liter turbocharged four-cylinder as standard. That 2.3-liter engine is paired with a 10-speed automatic and gets 300 hp and 24 mpg combined.

Keyword: 2 Advantages the 2022 Ford Explorer Has Over the Kia Telluride