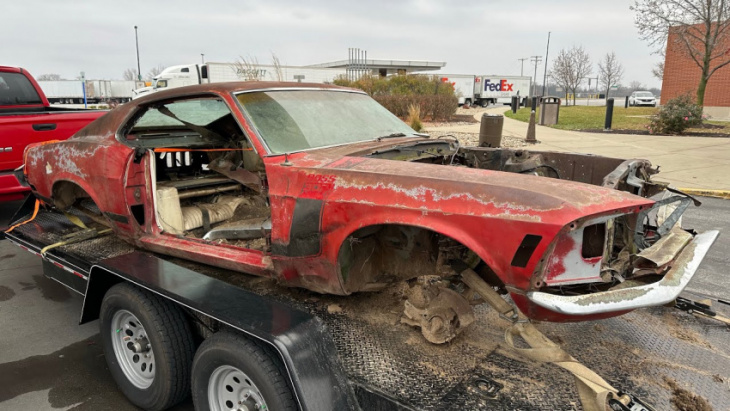 Car guys have kind of a funny addiction, especially if they’re the sort of do it yourself and hands-on kind of people. Basically the game is, find an old car, fix it up, and make it better than it was before. The flourishing car culture of the Internet has made it even more exciting And given these people a platform to express their passion to other indigenous. Here’s a prime example of exactly that in which a man bought a car that many thought would be unsavable only to begin restoring it to a beautiful state.

The vehicle in question is a 1970 Ford Mustang, but it isn’t just any pony car that you might see driving around on the street. In fact this is a Boss 302 which means that it’s packing quite a monstrous V-8 under the hood and is ready to take on everything from Camaros to challengers. Will, that’s what it meant when the vehicle was brand new. These days the Mustang is a little more than a body, I mean it doesn’t even have wheels to roll on.

Sure, the shell of the old muscle car might be stripped out completely and devoid of almost all working mechanical parts. However, that only enriched the spirit of this dedicated enthusiast and made him more excited to work on the car. Basically, you can think of it as how an artist looks at a blank canvas. He’s starting off with a great platform and a name that he knows and loves very well but generally he can do whatever he wants to the car with relative ease knowing that he can only make it better from here. That’s exactly why we, as car enthusiasts, love project cars and this guy looks like he’s about to make the best of it.