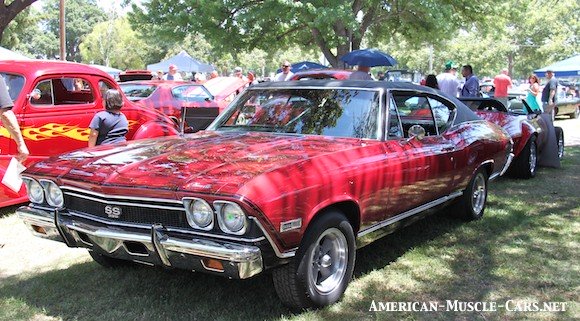 USHERS IN THE 2nd-GENERATION. Kicking off the Second-Generation, the 1969 Chevelle not only got a whole new body shell, but even the wheelbase was changed, going from 115 inches in the 1967 Chevelle down to 112 inches in the Coupe and Convertible (and all Chevelle SS 396s were either Coupes or Convertibles). Civilian Chevelle sedans and wagons went to a 116-inch wheelbase. The body itself was much more tapered, ‘pointier’ at both ends, and more curvaceous, where the ’67 was boxy by comparison. The new car had a long hood and short rear deck with a high rear-quarter kick-up. The hardtops now were semi-fastbacks. The Super Sport models had hideaway wipers. Their accents were blacked out. They rode on F70 X14 red line tires. 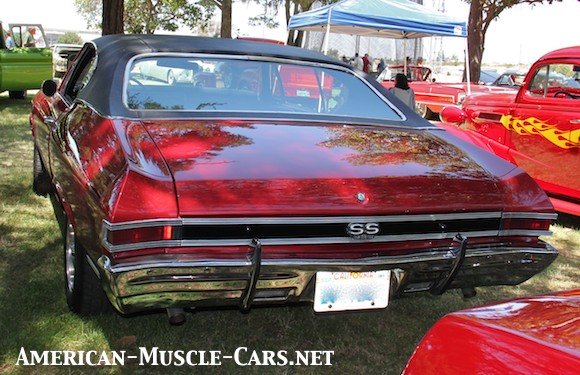 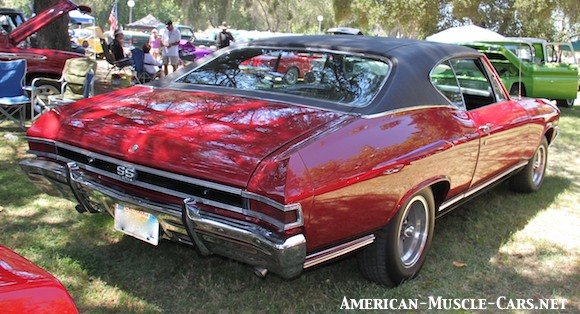 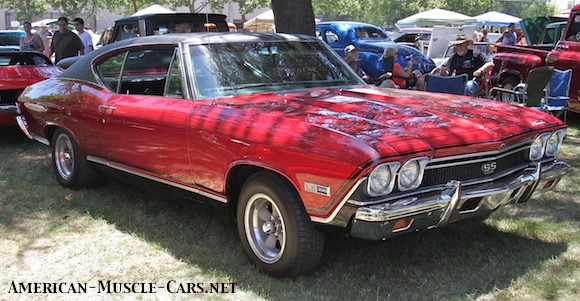 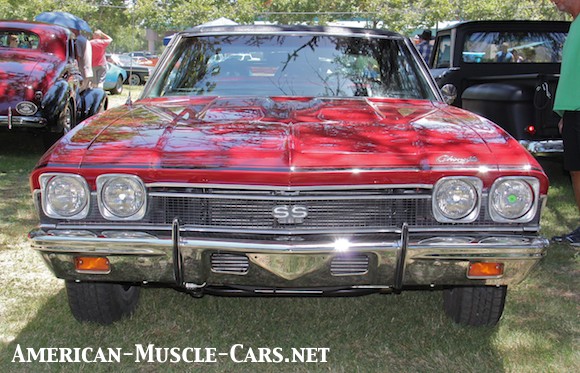 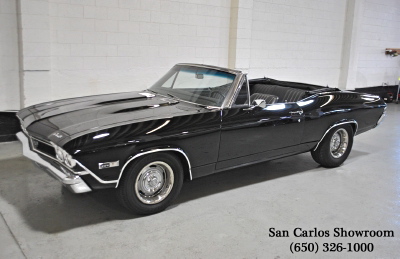 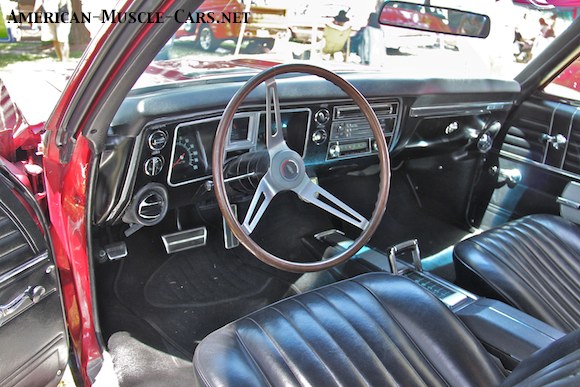 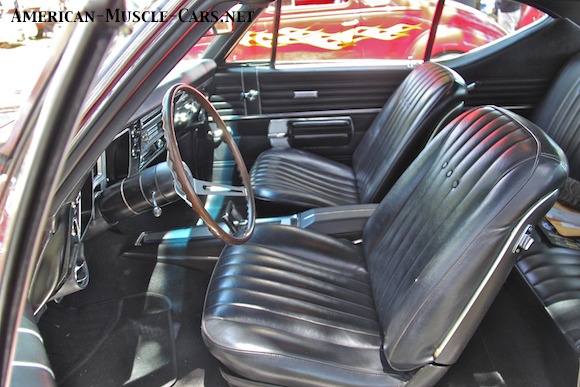 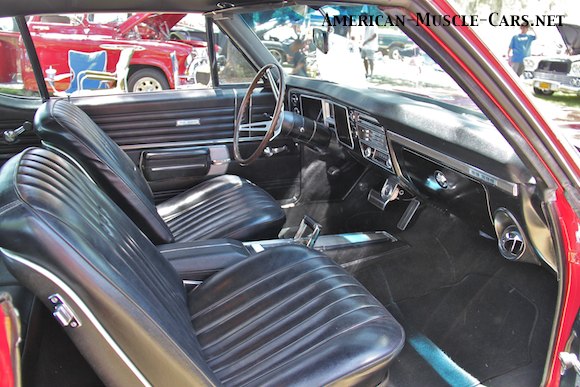 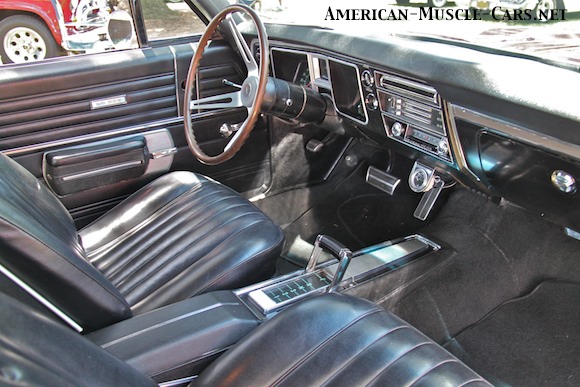 The 1968 SS396 came standard with the 325hp Turbo-Jet 396 V8. There were two optional 396 V8s, one with 350hp, and the other with 375hp. Along with the new body, the SS396 came with a cool new hood with twin power bulges. Due to mounting pressure from new smog regulations, Chevy reworked the 396 Mark IV big block in an effort to ‘clean it up’, and in the process bored it slightly to 402 cubic inches of displacement. Today, we call these engines 402s, but back in 1969 they continued calling them 396s. A funny thing in the performance-specifications-intensive muscle car marekt at the time…until you remember that GM had an edict preventing any engine larger than 400 cubic inches to be placed in any midsized car (other than the Corvette, of course. A 402 would break the rules, a 396 just squeaked in under them. Of course, GM removed this rule in 1970 and a whole flood of big blocks came pouring out. 455s from Pontiac, Oldsmobile and Buick, and of course The Big Kahuna, the ultimate GM muscle car engine, the Rat Motor, the 454 big block V8. But that’s another story.

From about 1966 onward, Federal smog & safety laws continued to tighten, requiring more and more new equipment and systems to be installed. Manual transmission cars got GMs new “Air Injection Reactor” (A.I.R) smog pump. On the safety front, side marker lights became mandatory, as were seat belts for outboard front seat occupants. 1968 was also the year when VIN numbers were required by Federal law to be placed in the top surface of the dash, visible through the windshield from outside the car, even when it was locked. This is the way cars are, to this day.

1968 Pontiac GTO 1968 PONTIAC GTO USHERS IN 2nd GENERATIONGeneral Motors completely redesigned its entire A-body mid-sized car lines across all it’s brands for the 1968 model. Gone were the sharp edges and boxy shapes. In its place was a softer, more organic, more curvaceous body that almost looked like ...

1967 Buick Skylark GS 1967 BUICK SKYLARK GS NAME GAMEThe Grand Sport ceased to be an option package on the Buick Skylark lineup (ie: Skylark GS), and became it’s own stand-alone model, the Buick Grand Sport. For 1967, they became called “GS” and whatever the engine displacement was, in cubic inches. So, the ...

1969 Ford Ranchero A WORK IN PROGRESSIn our efforts to complete our online index, and make this the world’s greatest website about American Muscle Cars, we’re building pages as fast as we can. The first thing we add are the pictures. Then come the specs, and then the history. So, ...

1969 AMC AMX 1969 AMC AMX CHANGESThe AMX was in its second year and was largely carried over from the 1968 model year. Small differences in trim and details were made. The 5-spoke Magnum 500-like styled steel wheels were no longer chromed, but now they carried a stainless trim ring. ...

1966 Chevrolet El Camino 1966 CHEVROLET EL CAMINO BACKGROUNDGM was reskinning its cars every two model years, with facelifts in between. 1966 saw the Chevelle, and so also the El Camino get a total restyle that gave them a much brawnier, heavier, tougher look that played well. In fact, it was tougher, thanks ...

1965 Chevy Chevelle 1965 CHEVY CHEVELLE LARGELY CARRIED OVER The new Chevelle was available once again in Sport Coupe (pillarless 2-door hardtop) and Convertible body styles which were actuallly 2.7 inches longer and about an inch lower than the ’64 Chevelle. There were also numerous chassis refinements, most minor. The Super ...