1961 Chevy Biscayne Is Saved From The Crusher 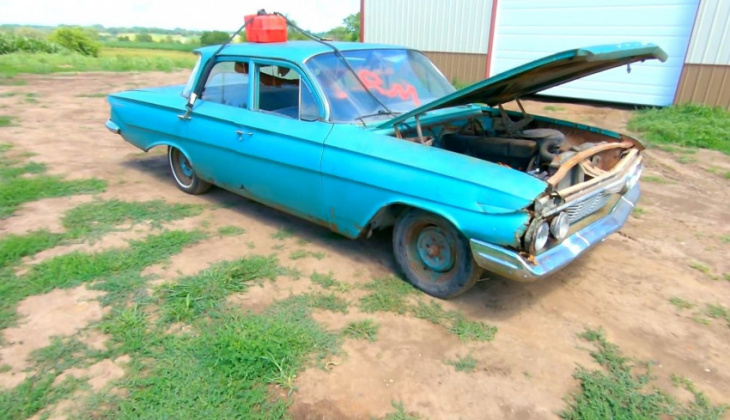 Its fate was almost sealed…

1961 was a big year for the classic American performance and luxury vehicles we all know and love. Everything from the earlier concepts of the Chevelle, Nova, and GTO were soon to arrive on the American performance automobile market and audiences everywhere were hungry for power. When looking at the models made past 1964 or so we often gloss over the vehicles which made their production possible. This particular Chevy Biscayne is a great example of one such grandfather car to some of GM’s best models. Clearly it’s been sitting for a while and was going towards the crusher before a group of dedicated enthusiasts saved it in favor of a new life on the road.

At first inspection, things don’t look too great for this vintage automobile as parts can visibly be seen falling off the body and wheels. From an outsider’s perspective, however, rust doesn’t seem to be an issue though that could be easily concealed. Another good attribute present on the car’s body is its shiny paint which seems to show off its colors with a vibrant patina. Overall, for a vehicle that has been sitting in a junkyard for multiple decades, the car is in pretty good shape and might just be perfect for restoration. Of course, before we get ahead of ourselves, it’s important to get a general diagnostic of how the engine runs, if it does at all.

Under the hood is an engine which does not exactly scream performance but it certainly does not fall short in terms of sound and power. Utilizing 235 cubic inches of displacement, this straight-six engine clearly does not run yet but the goal is to fix that and get it to the shop for restoration. The first step was checking the spark plugs, electrical system, and fuel system which showed that the cylinders were not getting fuel. After some testing, we found out that the engine had compression and the new owner got to work getting it started. Eventually, the guys got it starting, running, and driving before bringing it home to be worked on after having sat for likely over 30 years.

Keyword: 1961 Chevy Biscayne Is Saved From The Crusher