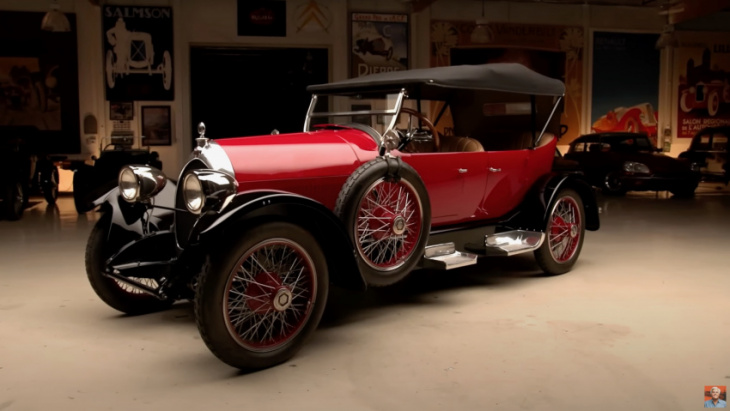 Jay Leno is a big fan of Duesenbergs. This car may seem like yet another addition to the series of Duesenbergs featured on “Jay Leno’s Garage” over the years, but that’s not quite the case.

This 1920 ReVere-Duesenberg Four Passenger is a product of the long-defunct ReVere brand. But it has an engine designed by brothers Fred and August Duesenberg before launching their eponymous car company, which sold its first car in 1921.

Badged as a Rochester Duesenberg, the 5.5-liter inline-4 had an unusual “walking beam” design that Leno describes as “a cheap alternative to dual overhead cams.” Instead of moving the cams up in the engine to directly actuate the overhead valves, the Duesenberg brothers designed rods to connect the cams and valves. Their back-and-forth motion gave the walking beam engine its name. 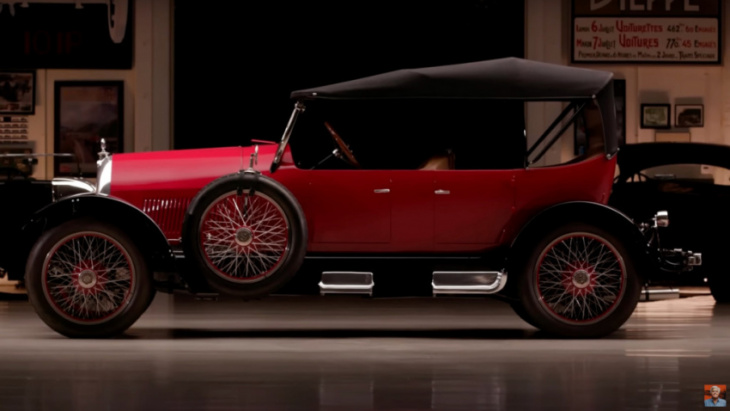 That wasn’t the only unusual feature of this engine. It was cast in one piece with no heads, so the valves stick out of the sides of the block. This eliminated head gaskets—and thus a potential point of failure—but also made accessing the engine’s internals trickier than a conventional engine design.

The engine proved reliable in racing, and since the Duesenberg brothers weren’t making their own cars yet, they used that on-track performance to market the engine to other automakers. ReVere was one of the companies that came calling. Rather than design its own cars from the ground up, ReVere assembled them from components sourced from outside suppliers—a common practice in the 1910s and early 1920s auto industry.

While the head of ReVere appeared to have set up the company as a stock scam, it did produce a few examples of a remarkably good car. The Duesenberg engine is a “torque monster” that made the ReVere pretty fast for its time, according to Leno, and the car’s aluminum doors and an an aluminum radiator shell were fairly novel features. It still had to make due with only rear-wheel brakes, however.

Leno estimates that only four or five ReVere cars are left today out of about 200 built, making later cars from the Duesenberg brand seem common by comparison. Those cars featured a more sophisticated twin-cam straight-8 engine, and are still regarded by experts as some of the greatest American cars ever made. And the ReVere-Duesenberg was their prequel.