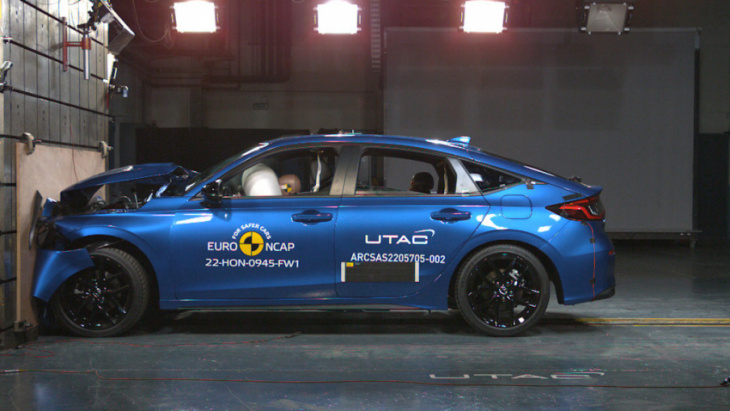 Embodying Honda’s commitment to zero road fatalities involving any of its products by 2050, the all-new Civic features a number of improved and upgraded technologies to achieve one of the highest levels of passenger and pedestrian safety in its class.

To meet stringent Euro NCAP, crash impact safety standards for Adult Occupant Protection, where it scored 89 percent, the Civic’s body incorporates a number of structural braces to enhance the overall passive safety of the vehicle. This includes additional front door stiffeners and rear wheel arch frames that improve side impact performance. These are joined by a full-width brace that supports the joining edge between the floor and resin bulkhead, to help control and limit deformation in the event of a head on or offset frontal collision.

This level of protection is extended to all occupants of the all-new Civic, not just adults. The car also scored well in the Child Occupant Protection, scoring 87 percent, thanks to the integrated ISOFIX mounting points that conform to the latest European i-Size standards.

The passive safety features on the all-new Civic are complemented by an enhanced Honda Sensing suite of active safety and driver assist technologies. However, unlike the version found in the Philippines and in North America, the European Civic incorporates sonar sensors that use sound waves to detect non-metallic objects such as glass and walls. It offers greater accuracy compared to the millimeter wave radar previously used.

On top of the sonar sensors, a monocular wide-view 100-degree view camera, improves the car’s capability to identify road lines, verges, motorcycles, and cyclists. In addition, a new high-speed processing chip improves the detection, performance, and control of the system, meaning it can identify objects earlier and more accurately than before, including pedestrians in light and dark environments.

Included within Honda’s expansive Sensing offering is an improved Forward Collision Warning System, which is designed to detect the presence of vehicles in front and issue audible, visual and tactile alerts to alert the driver if approaching with too much speed. If the driver fails to respond, the Collision Mitigation Braking System is triggered, which automatically applies light brake pressure to help reduce the likelihood or severity of a frontal impact. If the system senses imminent collision, it will now brake forcefully.

The all-new Civic is also rated with a

as well as a Top Safety Pick+ by the Insurance Institute for Highway Safety (IIHS).