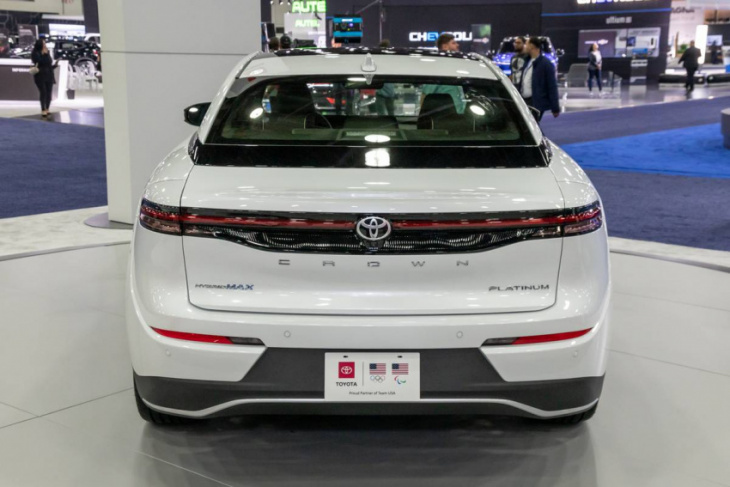 The 2022 North American International Auto Show in Detroit opened last week and runs through Sunday, giving car shoppers and auto enthusiasts a not-so-sneak preview of what they can expect to see on dealership lots in the coming months. Among these all-new and upcoming models is something unusual in the 2023 Toyota Crown: not quite a crossover coupe and not a large sedan, but picking and choosing characteristics of each to create a royally unique vehicle for an equally unique buyer who’s not exactly interested in a crossover or a sedan.

In Cars.com’s most popular news article of the past week, reviewer Aaron Bragman — who got up close with the Crown at the Detroit show — takes stock of the all-new Toyota’s cool-looking, raked-back shape and high-riding stance, in addition to its inclusion of a sedan-like trunk. Bragman lauded Toyota’s uncharacteristically bold styling choices but lamented the confounding lack of headroom for a body style one assumes would favor such comforts. Overall, it’s a quirky and endearing alternative for someone interested in flouting convention — exactly who, if anyone, that someone is remains to be seen.

For further details on the 2023 Toyota Crown, follow the link below to the No. 1 news story of the week.

The Motor City motor show figures heavily into this week’s countdown of most read articles, with the Detroit-debuting 2024 Ford Mustang charging into the third- and fourth-place spots. Bragman also got personally acquainted with the redesigned seventh-gen ’Stang — a deft mix of the traditionalist and the technological, designed to attract these kids today without trespassing on the old folks’ lawn. The iconic pony car, returning for what could be its swan song, boasts a beefed-up interpretation of its familiar retro exterior styling as well as a true-to-from carryover powertrain lineup, juxtaposed with a techtastic interior that all but eschews classicism. Meanwhile, the 2024 Mustang Dark Horse is in the running to infuse the next-gen GT trim with high-performance street and track capabilities courtesy a 5.0-liter V-8 that cranks out an anticipated 500 horsepower.

For the full scoops on the 2024 Ford Mustang and Mustang Dark Horse, follow the links below to our Nos. 3 and 4 news stories of the week, respectively.

Beyond that, we’ve got headlines on the Kia Sportage, Honda CR-V, Lexus RX, Ford Maverick, Honda Pilot, Dodge Hornet and much more — so don’t stop reading till the digits double. Here are the top 10 news stories Cars.com readers couldn’t get enough of in the past week:

What might this old school muscle car become? Car guys have kind of a funny addiction, especially if they’re the sort of do it yourself and hands-on kind of people. Basically the game is, find an old car, fix it up, and make it better than it was before. ...


View more: The Ford Transit Connect Slots Above the Chrysler Pacifica on This Best Minivans List

The all-electric F-Series is a good EV and a great pickup truck, plain and simple.

Has Ford struck gold with its Transit Custom Nugget campervan? We hit the road to find out…


View more: 3 Advantages the 2022 Kia Telluride Has Over the Ford Explorer